What you won’t do for love

A couple is excited to learn they will share more than sex, until the doctor speaks

• A family that keeps no secrets makes for a happy wedding, or so it seems 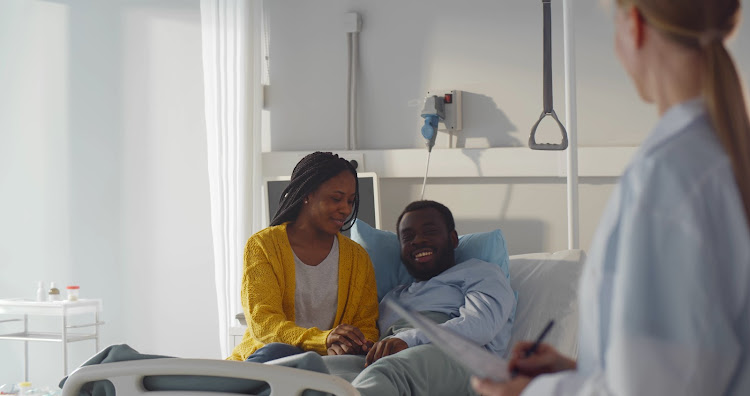 A patient smiles after his girlfriend visited
Image: SHUTTERSTOCK

People are constantly affirming why I want to stay single. Today, a man came into the hospital with liver failure, surrounded by his family and bride-to-be.

“He doesn’t drink much, if that’s what you’re wondering,” said his fiancé.

“She’s right,” said the man’s brother, who looked sloshed to the gills. “He’s nothing like me.”

“I’ll have some tests done to determine the cause,” I assured them. “For now, his liver is so damaged he’ll need a transplant. Any of you willing to be a live donor can get tested.”

Two of the family members were a perfect match. The first was the brother, but his liver looked cooked and was swollen to twice its normal size. “That’s dope, right?” He grinned proudly. “Take out as much as you need for my small bro.”

“No,” I said. “It means you’re on course for liver cirrhosis. You’re only a few drinks away from lying on the bed your brother is in now.”

As shock radiated through the family, I delivered the good news. “Fortunately, his fiancé is also a perfect match.”

She nearly collapsed with joy. “Me? You mean we can share even our physical bodies? You know, besides sex?”

The family was hugging and high-fiving with joy when the patient turned to me. “Doc, why did my liver fail?”

“We can talk about that in private.”

“No.” He pulled his fiancé closer. “I have no secrets from my family.”

“Okay. You have viral Hepatitis B.”

“What?” The fiancé’s eyes grew to the size of eggs. “Isn’t that sexually transmitted?”

“Damn it, bro!” shouted the brother. “I warned you about Amelia, dude.”

“That’s it.” The fiancé strutted towards the door. “The wedding is off. Go ask Amelia to give you her liver.”

Marcus went after her. “Don’t be so dramatic. They only hooked up a couple times, but it’s you he wishes to marry.”

The poor guy is still on the transplant waiting list.

Welcome to a bachelor’s crib

Having had only three girlfriends and no sex, Sgt Makini is ill at ease
Sasa
1 year ago
The groom who chose the wrong girl
by David Muchai LLB Writer, Author & Content Creator at XLNC Media Inc
Entertainment
24 September 2021 - 20:00