Come clean on source of your wealth, Raila dares Gachagua

“He is a first-term MP and three years into his leadership he had amassed excessive wealth."

•Raila says it is unfortunate for a leader seeking elevation to the status of deputy president to "steal" from his own country despite the high levels of poverty ravaging Kenyans.

•Odinga called on Kenyans to secure him the presidency pledging to ruthlessly deal with graft if elected. 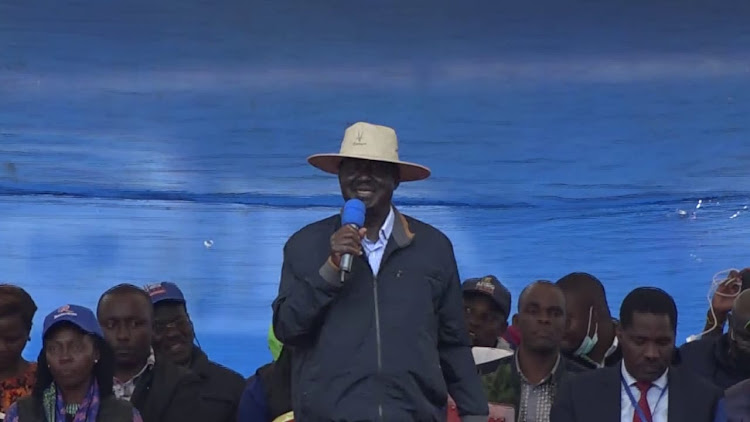 This is after the high court last week directed Gachagua to forfeit to the state a total sum of Sh200 million which he is said to have fraudulently acquired from government agencies through corrupt deals.

Raila says it is unfortunate for a leader seeking elevation to the status of deputy president to steal from his own country despite the high levels of poverty ravaging Kenyans.

He added that Kenyans are illustrious but hardly get value for their sweat and taxes because much of their deserved pay gets into the pockets of a few selfish individuals.

Speaking in Kerugoya stadium, Kirinyaga county, Raila is now urging Kenyans to reject  Gachagua and the entire Kenya Kwanza brigade failure to which Kenya risks sinking into an economic turmoil due to the large-scale corruption that will be in practice.

“He is a first-term MP and three years into his leadership he had amassed excessive wealth whose source is questionable. We want to know what kind of business would give such exponentially abnormal profits?” he posed. 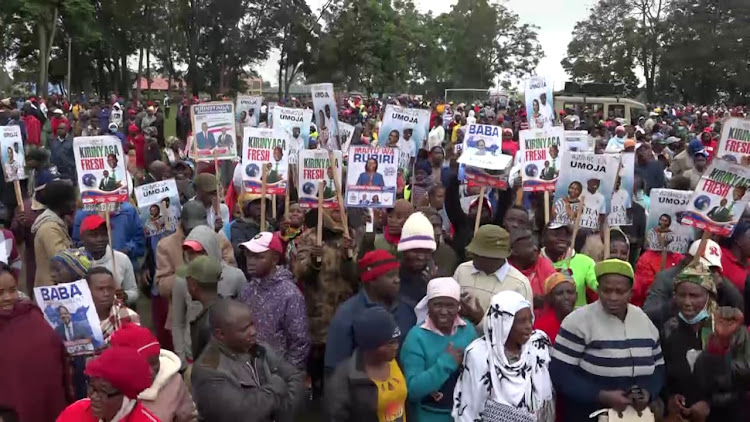 Late last month during a joint televised debate for the presidential running mates, Gachagua was revealed to be an accomplished businessman whose wealth he got through genuine means while the economy was thriving under the Kibaki era.

Similarly, he said he was a  civil servant who served in different government agencies.

Speaking on Monday Odinga called on Kenyans to secure him the presidency upon which he pledged to ruthlessly deal with graft.

He said that an Azimio government has an effective cure to treat corruption which he said is  “an excruciating headache that has refused to go away”.

In addition, he pledged that his administration will fulfil all the promises laid down in the Azimio manifesto.

"When you elect us, give us a period of 100 days out of which you shall see tremendous transformation in our country. We have a workable manifesto which we intend to execute in a bid to save our country from plunging further.”

In a bid to bolster and solidify the Azimio support base, Karua called for a cease-fire between Narc Kenya's Muriithi Kagai and Jubilee party’s Charles Kibiru who both are contesting the Kirinyaga governorship bid.

“We are optimistic that Kirinyaga will vote in Azimio up to the last man. However, much as we will clinch the presidency, we can not afford to lose the other elective seats and that is why I’m calling Kagai and Kibiru to enter into a consensus on who will fly the Azimio flag in next week’s election. We can not afford to divide the votes,” she said. 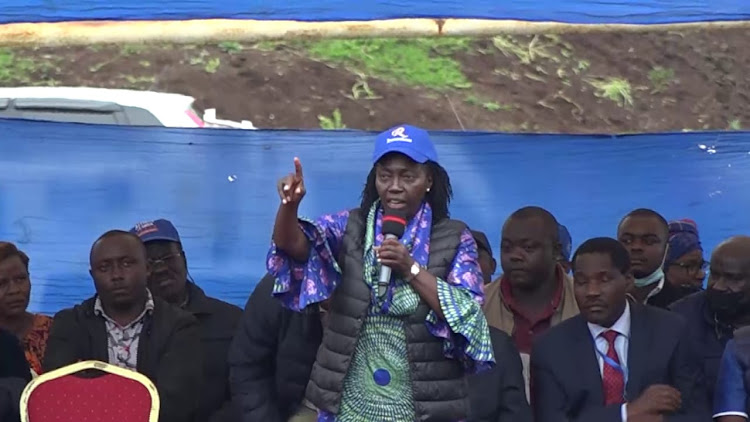 Agriculture CS Peter Munya urged Kirinyaga residents to rally behind one of their own as she is on the path to making history.

“This will be a historic and defining moment in Kenya’s history to have Kirinyaga produce the first woman deputy president. Make that happen in next week’s polls.”

Munya further sounded a stern warning to all the flour millers hoarding Unga saying the law will be applied firmly to them.

He maintained that the basic commodity will continue retailing at a discounted price of Sh.100 as per the orders of the government.

“I will spend my entire day tomorrow going round the mills in a bid to nab all the millers who are hoarding the commodity because this is un-expectable, ” he said.

Tuju said Ruto has since sensed an early defeat and has resorted to hawking innuendoes and unfounded claims in a bid to evoke emotions from Kenyans.

“We know your claims are intentional and only are interested in seeking sympathy votes. That you shall not get.”

His sentiments were echoed by former Gatanga MP Peter Kenneth who urged Ruto to refrain from blaming the president for his failures.

He noted that an Azimio government will secure his family and as such should not panic.

Murang’a woman representative Sabina Chege called on Kirinyaga residents to overwhelmingly vote for an Azimio government in next week’s polls.

Raila says Ruto should dump Gachagua since court ordered him to pay Sh200m.
Counties
1 week ago

Kanini Kega blames Gachagua after his billboard was destroyed

"Kanini's name is engraved in my people's hearts, not Billboards! Defacing my Billboards won't help you."
News
1 week ago

The outgoing Mathira MP called on Kieni residents to replace Kega.
News
1 week ago
WATCH: The latest videos from the Star
by WANGECHI WANG'ONDU
News
01 August 2022 - 22:22