Raila says Ruto should get rid of running mate since court ordered him to pay Sh200 million. 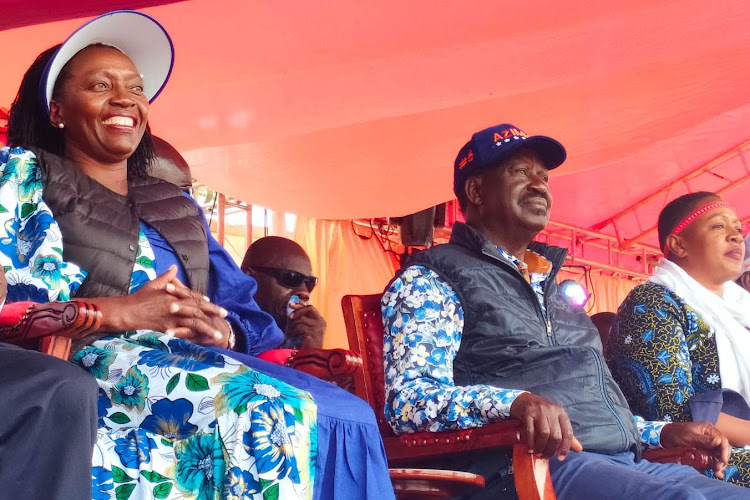 Azimio presidential candidate Raila Odinga's allies have said rival William Ruto was just trying to get sympathy votes by claiming his life was in danger.

Ruto is running on the UDA ticket and with the election just a week away, both candidates are criss-crossing the country in hunt for votes.

Raila held rallies in Nandi and Uasin Gishu counties on Sunday. Allies led by Karua accused Ruto of lying that his life and that of his family were in danger.

Kenya Kwanza should first tell us who killed [IEBC techchief] Chris Musando in 2017; [tycoon] Jacob Juma and ICC witness [against Ruto] Meshack Yebei before claiming their lives are in danger

Ruto during a campaign rally in Nyeri last week claimed his life was in danger and asked President Uhuru Kenyatta to ensure his children are safe.

But Karua said the claims are lies, saying Ruto was very well protected by more than 250 police officers.

"He is still an employee of the government as the Deputy President with full protection," Karua said.

"Those in Kenya Kwanza should first tell us who killed [IEBC technology chief] Chris Musando in 2017; tycoon Jacob Juma and ICC witness [against Ruto] Meshack Yebei before claiming their lives are in danger," Junet said.

Another Raila ally Peter Kenneth said DP Ruto's family was safe and there was no cause for alarm.

“Let him not seek cheap sympathy by claiming that someone was targeting his children," Kenneth said.

They spoke during a rally at the Huruma Grounds in Eldoret town, a few kilometres from Ruto's rural home in Sugoi.

Raila said their Kenya Kwanza rivals should prepare for a political tsunami that would sweep them away on August 9.

He said Kenya was ripe for a revolution that would transform the  economy and bring prosperity.

"I said long ago that there was a tsunami coming but they said I was lying. There are now jus a few days left and they will be swept away," Raila said.

He said residents of the region must be ready to vote for anyone they want without intimidation or threats. He said the rights of all Kenyans were well protected by the Constitution.

Odinga led residents in taking a public oath to vote for him and not flee the region, just like the oaths taken by Kenyans in other parts of the country.

He said the Azimio government would take care of all Kenyans regardless of where they live.

He said Kenya's economy was at one time the same as that of South Korea's but due corruption growth in the country had stagnated.

"We must put up industries to create jobs for our youth and also improve our agriculture," Raila said.

He reiterated that DP Ruto must disqualify his running mate Rigathi Gachagua whom he described as a convict.

"We are running against convicted thieves and they cannot fool Kenyans anymore,” Odinga said.

He promised that in 100 days Kenyans would see great change as the prosperity begins to dawn.

"Our country is at  cross roads.” We must chose if we want liberation or continued corruption," Raila said.

Raila said that Kenya was now ripe for a revolution that would transform the country economically.
News
2 weeks ago

These are the stories making the headlines in the Star.
News
2 weeks ago

JOEL NYAMBANE: Ruto might win first round due to hustler wave

The DP accuses the President of deploying county commissioners, chiefs and their assistants to propel Raila's candidature
News
2 weeks ago
by BY MATHEWS NDANYI
Rift Valley
01 August 2022 - 22:00