All agreed to promote peace and discourage incitement and violence

• The peace initiative in the region is spearheaded by the NCIC, civil society groups and church leaders in the region. 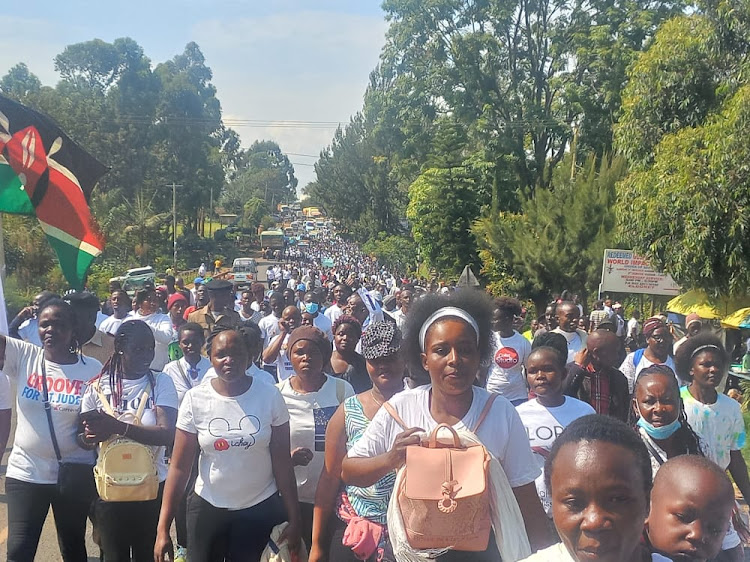 Three governor candidates in Uasin Gishu on Wednesday signed a commitment to ensure peace and unity in the region during the August 9 general election.

The peace initiative in the region is spearheaded by the National Cohesion and Integration Commission, civil society groups and church leaders.

The county has been listed by the NCIC as a hotspot region ahead of the polls.

“We commit to ensure peace and unity because at the end  of the day we are all brothers and sisters of the same family regardless of whoever will win the polls," Bii said.

He said so far they had ensured peace in all rallies and the same would prevail until the general election and afterwards.

“We are engaging in brotherly political competition and not enmity. Whoever wins will be our leader and losers will be accommodated," Bii said.

Kirwa said he was also pleased that the campaigns had been quite peaceful and that preparations for the polls were going on well.

“We discourage any leaders from using incitement or hate speech because we all need Kenya after the elections," Kirwa said.

Buzeki, Bii and Kirwa are battling to succeed Governor Jackson Mandago who is completing  his second term. He is running for Senate in Uasin Gishu.

Bishops and Muslim clergy in Rift Valley have intensified joint efforts to sensitise residents and political leaders to ensure peace and unity.

The clergymen have cautioned Kenyans not to elect leaders who thrive on incitement and misuse of youth during elections.

Chairman of the NCCK in the region Reverend Daniel Barno, said they would not tolerate any leader or resident propagating hatred among communities in the cosmopolitan region.

“We urge our political leaders and all residents to keep away from issues that undermine peace and unity. Elections come and go but our country must remain peaceful and united at all times,” Rev Barno said.

The clergymen said they would continue to go round the counties to encourage peace and unity ahead of the polls.

Catholic Bishop of Eldoret Dominic Kimengich has also taken part in religious meetings, urging political leaders to guard the country’s peace and unity at all costs.

“We want our country to come out of the polls stronger and peaceful so Kenyans can focus their energies on their livelihoods.

"Whoever will be elected as leaders must also focus on dealing with the many challenges we face as a country," Kimengich said.

More than 200 clergy from the Deliverance Church, including bishops, have also cautioned Kenyans to keep peace and unity despite the highly competitive general election.

Bishop George Gichana said churches should also pray for the country to remain stable as they encourage Kenyans to vote. It is too late to register.

“As they do so, everyone must ensure we all keep peace at all times," he said.

Gichana said they would actively use the pulpit to encourage and pray for the country.