The programme, which began four years ago, has 1,493 students as beneficiaries

• Ali said they have not only kept their promise to the initial 200 students from 2019 but have also sustained the effort and extend the programme.

• The programme, he says, aims to seal loopholes that forced students to drop out due to school fees. 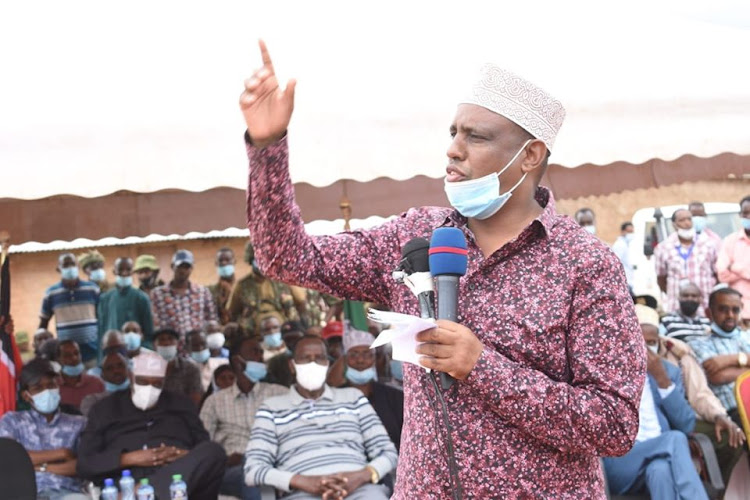 Some 442 needy students in Marsabit will benefit from a Sh20 million scholarship programme from the county.

The scholarship programme, which began four years ago, has 1,493 students as beneficiaries.

Marsabit Governor Mohamud Ali said they have not only kept their promise to the initial 200 students from 2019 but have also sustained the effort and extend the programme.

The governor spoke on Friday while issuing the scholarship funds at Moi Girls High School Marsabit.

The programme, he says, aims to seal loopholes that forced students to drop out due to school fees.

"The county scholarship programme reaffirms our faith in values of compassion and caring for each other. Also, in our belief in the power of education and commitment to pursue development that is focused on real needs of people," Ali said.

He said measures have been put in place to ensure only deserving children benefit from the programme.

Ali said the selection process is done in a transparent and credible manner and bright and needy students are given a chance to pursue an education.

The beneficiaries are identified by the committees at village level before the names are forwarded to the committee at the county level.

The county boss said his government is committed in ensuring that all learners from poor backgrounds have access to education.

He said many parents are facing harsh economic times and the scholarship will go along way in helping students to continue with their learning uninterrupted.

Ali however warned the beneficiaries against laxity, which could lead to termination of their scholarship.

He also said the students should maintain high standards of discipline as doing contrary could scuttle their academic dreams.

Since its inception, the initiative has led to improved performance in primary as students put more effort to win the scholarship.

Beneficiary Zeituna Duba from Saku thanked the governor for giving her an opportunity to pursue an education and said she will work hard to achieve her dream of becoming a doctor.

Another beneficiary from Balessa in Dukana ward praised the governor for the great opportunity accorded to them to realise their dreams.

The governor further said communities in the county should maintain peace and use alternative means to resolve their differences.

"As we approach the general election, their is need for peaceful coexistence. A peaceful county leads to development," he said.

Ali said political leaders should be at the frontline preaching peace and reconciliation.

He also urged youths not to be misused by politicians who are out to take advantage of them.

"Life is sacred and no one is supposed to take the life of another human being," the governor said.

While echoing county boss, Deputy Governor Solomon Gubo Riwe said security agencies should beef up security across the county and use intelligence to maintain peace.

Meanwhile, five people including Loglogo senior chief Kennedy Kongo and his assistant Keena Mugo were on Thursday killed by bandits at Awaye in Marsabit.

The victims were on pursuit of stolen animals when they were ambushed by the attackers and killed on spot.

Tension was high along Marsabit- Isiolo road as angry residents in Loglogo protested the killings.

They were in the company of the five killed while pursuing the stolen animals.

They went missing after an ambush on government officials that left five dead.
News
9 months ago