Two suspected livestock thieves were beaten to death an set ablaze by irate residents from Kathiriku village in Mwea on Sunday evening. https://bit.ly/3Eu43Oj 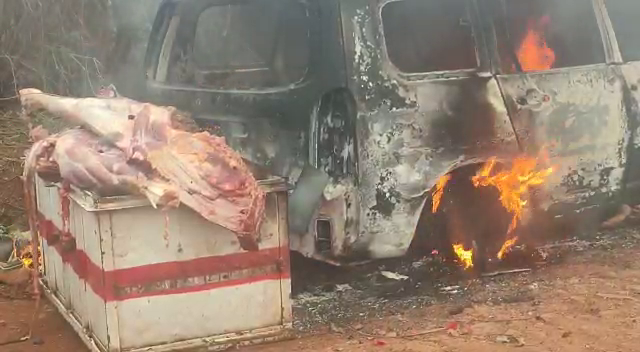 MOB JUSTICE: A vehicle suspected to have carried meat skinned from stolen livestock burn down after being torched by irate villager on Sunday, November 20.
Image: WANGECHI WANG'ONDU

Two suspected livestock thieves were beaten to death an set ablaze by irate residents from Kathiriku village in Mwea on Sunday evening.

The two suspects are alleged to have been nabbed with a large sized meat metal container filled with slaughtered meat, cows’ heads and skin.

They were allegedly ferrying the meat to an unknown destination via a Toyota -Probox  KBS 519L.

The meat is said to have been skinned from four cows, which mysteriously disappeared the previous night from their sheds.

Police boss Daniel Kitavi said the vehicle, which was also torched by the public, is said to have been owned by one Rose Wambui Kamau from Embu who had hired it out to one Joseph Kamau Igathu early last week.

Kitavi said that Igathu, 23, is suspected to be one of the two occupants whose bodies were torched.

He however said an autopsy is slated to ascertain his identity as the body was burnt beyond recognition.

The other body belonged to a passenger who was simply identified as Murimi alias Kimondo. 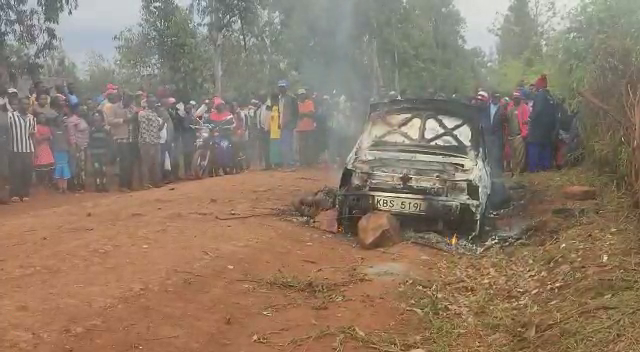 “Rose Wambui Kamau produced a police report in which she had filed at a police station in Embu on Saturday. This is after the person who he had hired the vehicle to failed to return it on Friday, which was the agreed day,” Kitavi said.

“The person in question was Joseph Kamau Igathu whom we highly suspect was the driver of the vehicle by the time the incident occurred.”

Kitavi further cautioned the public against taking the law into their own hands and instead report crime related matters to the authorities.

His sentiments were supported by chief Elias Kiura who said mob justice is not the legally approved way of dealing with suspects, as they too have a right to defend themselves before a court of law.

“We have warned people against taking such illegal measures as they make the case even more complex .We are now unable to obtain more information from them because they are dead,” he said.

The bodies were transferred to Kerugoya hospital mortuary pending autopsy to ascertain their identities.

The residents who were consumed by rage warned other suspects who might be plotting to steal their livestock, to rethink their plan lest they regret their actions.

They said for the longest, they have had to bear the pain and financial setback of losing their livestock, a crime they say has now gone out of hand.

“We acted on a tip off, which we received, over last night’s theft. We decided to pursue the suspects until we cornered them and taught them a lesson. This was their fortieth day,” a resident said.

Another villager whose cow was stolen said she was able to identify the head of her missing cow from among the carcasses that were being ferried. 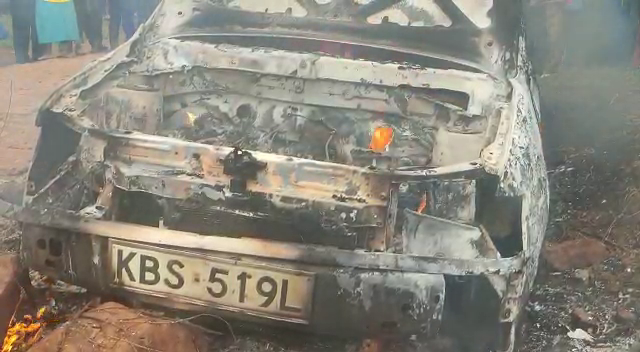 STOLEN LIVESTOCK: The skeletal remains of the vehicle torched by the irate residents.
Image: WANGECHI WANG'ONDU

They said the common citizen is evidently more at risk as they are easy targets for gangs.
News
2 weeks ago

The suspect is alleged to have been operating in Huruma and Kariobangi.
News
2 weeks ago

Their outcry comes a day after a businessman was on Thursday shot in Tiengre
News
2 weeks ago
Post a comment
WATCH: The latest videos from the Star
by WANGECHI WANG'ONDU
Central
22 November 2022 - 13:02
Read The E-Paper