•Muturi said they were with Wetang'ula in the same class and were roommates in their first year at the university.

•Wetang'ula on Wednesday formally resigned as Bungoma Senator to vie for the National Assembly Speaker. 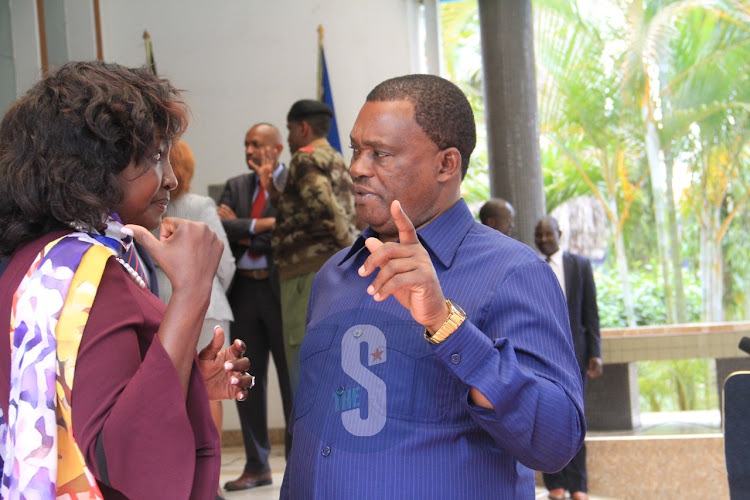 Outgoing National Assembly Speaker Justin Muturi has endorsed Moses Wetang'ula as his successor saying their interactions date back to their school days.

Muturi said he was hopeful that the former Bungoma Senator wins the seat that he is fighting for with Azimio’s Kenneth Marende.

“I am too familiar with him. Our interaction dates back many years,” he said.

Muturi said they were in the same class and were roommates in their first year at the university.

“We were appointed to serve in the judiciary on the same day. Wetang'ula was posted to Nakuru and I went to Bungoma,” he said.

“I have gotten to know his family. I found myself in familiar hands when I was posted in his area.”

Wetang'ula on Wednesday formally resigned as Bungoma Senator to vie for the National Assembly Speaker.

The law requires one to resign from any public office they are holding before vying for Speaker's post.

Wetang'ula said the Parliament is critical in the management of the country's public affairs.

He said the Kenya Kwanza administration will not be involved in the capture of state institutions.

Wetang'ula expressed confidence in their voting, saying their members will vote for them.

“Tumejipanga. Our numbers are right,” he said.

Wetang'ula is vying against  Marende and 20 others while Gladys Shollei is running against Dadaab MP-elect Farah Maalim and three others.

"I did resign a day after the gazettement of my election," he said.
News
3 months ago

Wetang'ula is my brother, I won't disclose my vote — Wanyonyi