Matiang'i said the operation will include ground and aerial assaults.

• He said the operation to evict bandits who crossed over to Baringo from Laikipia Nature Conservancy will commence on Saturday.

• He ordered that the boundaries be redrawn, the locations merged into one and a new chief recruited. 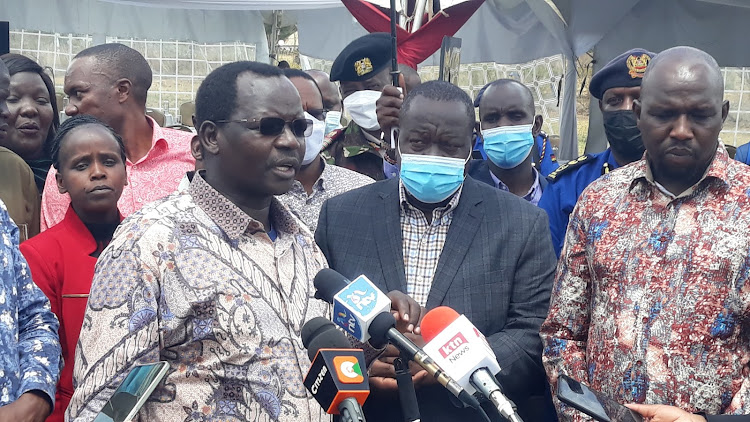 Interior Cabinet Secretary Fred Matiang'i has declared a major security operation along the borders of West Pokot, Elgeyo-Marakwet and Baringo to quell the deadly banditry attacks in the Kerio Valley

He said the operation to evict bandits who crossed over to Baringo from Laikipia Nature Conservancy will commence on Saturday.

Speaking during a security meeting with leaders from Baringo, West Pokot and Elgeyo Marakwet in Nakuru, Matiang'i said the operation which will include ground and aerial assaults will be ruthless.

"The crisis in Kerio Valley is no longer a resource conflict but a territorial expansionist strategy being instigated by a section of leaders," he said.

Matiang'i wondered how herder in search of pasture and water would result in burning houses and displacing communities.

The bandits who came in under the pretext of herders will have to leave Baringo together with their animals.

"What does grass or water have to do with people's houses, is the grass they're in search of found in people houses," he posed.

He said the Kerio Valley belt was the only region that he had visited with no resolution being found.

"This is the only place during my tenure in the Interior ministry that I have visited, not once but thrice with no end to conflicts," he said.

He ordered that the boundaries be redrawn, the locations merged into one and a new chief recruited.

"The locations were apparently formed complete with two chiefs to please the two communities in the area but the boundaries have been a source of conflict," he observed.

The two chiefs and their assistants have been redeployed to the Regional Headquarters as the recruitment of a new one gets underway.

He said the government had doubled security personnel and apparatuses along the troubled Kerio Valley belt.

He revealed that an Anti-Stock Theft Unit had also been established at Chesegon along the boundary between Baringo and Elgeyo Marakwet in the government's efforts to ensure security.

The NPR was disbanded in May on claims that they were colluding with bandits and engaging in cattle rustling.

Matiang'i said the government has established new stringent measures for the recruitment of a new crop of NPR.

The decision seems to have been advised by constant calls by residents who were opposed to the withdrawal of NPR and their consequent disarmament.

The affected communities claimed that the move had left them unprotected.

Leaders among the Cabinet Administrative Secretary Lina Jebii Kilimo said the NPR must be well remunerated.

Since December, seven people have been killed by armed bandits.
News
6 months ago

The raiders of unknown number staged the raid on Monday at about 7pm.
News
6 months ago
by LOISE MACHARIA
News
04 February 2022 - 15:11