•Commissioner Maalim said forcible disarmament decision would not be reversed because the state deployed costly resources on insecurity instead of development.

• He directed all security personnel in the region to be ready for tough action in battling bandits, organised crime and cattle rustlers. 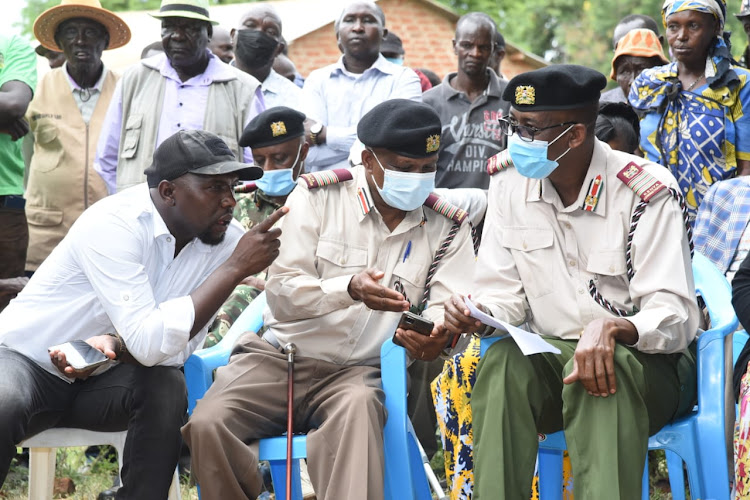 About 50,000 illegal arms are in the hands of civilians and bandits and the government is starting forcible disarmament in Kerio Valley to stop run away banditry.

Mohammed announced the start of mandatory disarmament in the volatile region where bandits have killed more than 80 people in six months.

"We have given a two-week ultimatum for people to voluntarily return all illegal arms, after which those who fail to do so will have no one to blame," Mohammed said.

The meeting was attended by top security chiefs from Baringo, Elgeyo Marakwet and West Pokot counties which have been most attacked by bandits.

“Starting in two weeks  the government will conduct a forceful disarmament to get all arms out of the  wrong hands," Mohammed said.

He was appointed last week to take over from George Natembeya who quit to vie for governor in Trans Nzoia.

The meeting was held at Tot in Marakwet East subcounty.

He said the government will not relent in the fight against insecurity in the region and warned that holders of illegal arms will be dealt with ruthlessly.

“Those who will be in a found in possession of illegal firearms will be eliminated before they eliminate others," he said.

Mohammed said there would be no reversal of  the decision because the government had deployed costly resources to curb insecurity instead of using them on development.

He directed all security personnel in the region to be ready for tough action in battling insecurity..

The region said officers who are lax in their work will not be tolerated.

"The government has deployed everything possible but it is still shocking that criminals are killing people, including women and children,"he said.

The administrator said all the county commissioners in the region have been ordered to conduct regular joint peace meetings and to include local leaders.

Disputes over grazing farms in the area will also be dealt with.

Police will take  action against individuals who trespass and graze their livestock on  neighbours fields without consent, causing violent conflicts.

“We will fully apply the law because it's in place to deal with those who don't want to live in harmony with others," he said.

Some of the victims of banditry narrated their ordeals during recent attacks in the region.

“All this is happening, yet no one has been arrested and we have government agencies right in the villages. We hope things will not remain the same," resident Salina Kanda.

Murkomen accused the security chiefs in the region of issuing empty threats that were not followed up with action.

He expressed regret that while many people had lost their lives, there were no reports of bandits arrested.

“The criminals have in fact become more bold attacking people in broad daylight and this is unacceptable," Murkomen said.

Governor Tolgos, who is ending his term, said his legacy was to leave a peaceful county.

“I am urging the government to do everything possible  to restore peace in the region before I leave office in August," Tolgos said.

He said his administration had initiated mega development plans for the region but many projects had stalled due to insecurity,.

Tolgos said he was among leaders in Kerio Valley who support any measures by the government to restore order .

“We need decisive action that would end insecurity because we need development to thrive and not this situation where people are struggling to survive every day," Tolgos said.

"Part of what is given to other security officers should be allocated for the Police Reservists who can be useful in dealing with the insecurity challenge,” Tolgos said.

They were heading to a funeral on Saturday when they were ambushed and shot dead near a school.
News - Page 1
8 months ago

Outgoing commissioner says politicians use violence to show sympathy, do nothing.
News - Page 1
8 months ago

Union cautions politicians against fanning violence, which he says erodes gains made in the education sector.
Counties
8 months ago

Fresh push for peace, pleas for NPRs in Kerio Valley

Leaders camping on border of W. Pokot and Elgeyo Marakwet for peace talks.
News
10 months ago
Post a comment
WATCH: The latest videos from the Star
by BY MATHEWS NDANYI
Rift Valley
01 February 2022 - 22:00
Read The E-Paper