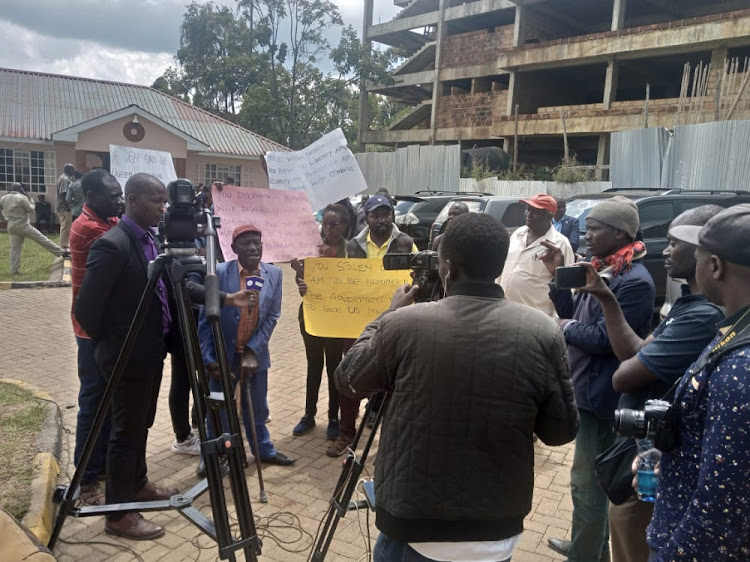 SIDELINED: Persons with disability demonstrate at Nyamira assembly building during the swearing-in of MCAs on Monday, September 19.
Image: ALVIN RATEMO

Persons with hearing impairment had the lowest reach of the Covid-19 intervention messages by the government in 2020 and 2021, a new report shows.

According to a September 2022 report by the African Population and Health Research Centre, only 59 per cent of people with that impairment in Kwale, Taita Taveta, Embu and Homa Bay received the intervention messages.

Sixty seven per cent of people with cognition impairments and 69 per cent with hearing impairments were reached in the interventions.

The report evaluated the inclusiveness, effectiveness and outcome of the Hygiene & Behaviour Change Coalition (HBCC) interventions for persons with disabilities, older people and their caregivers in Kenya.

The HBCC programme was introduced by the Ministry of Health and other health private sector players to raise awareness on hygiene behaviours to curb the spread of Covid-19.

“More than half (58 per cent) of the respondents with some form of disability and 71 per cent of older people received hygiene and behaviour change messages, mainly from the Ministry of Health,” reads part of the report.

“The most common messages received were on mask use, hand washing with soap and social distancing, which were mainly received from broadcasting media (TV and radio).”

The Covid-19 pandemic had a disproportionate impact on the lives of persons with disability and older people owing to their vulnerability, such as underlying medical or chronic conditions among older persons.

Among the various interventions implemented by governmental and non-governmental organisations, and in line with the Covid-19 preventive strategies were hygiene and behaviour changes, including hand washing with soap, the use of hand sanitiser and disinfection or cleaning of surfaces.

Overall, 21 per cent of respondents had some form of disability, specifically visual impairment (5 per cent), hearing difficulties (3 per cent) and mobility impairment (11.5 per cent).

The report says that at least 64 per cent of PWDs in rural areas received at least one hygiene intervention compared to 36 per cent in urban centres.

On the other hand, 68 per cent of the older people in rural areas received at least one intervention, compared to 32 per cent in urban areas.

In terms of hygiene kits, the report says less than 10 per cent of PWDs and older people received soap, sanitiser, or detergent, and less than 20 per cent received masks. These products were mainly distributed at public health centres.

“Hand-washing facilities in public spaces were more convenient to the general population. PWDs and older people experienced challenges in reaching the stations, and as such needed assistance from their caregivers,” reads the report.

The research said health professionals were the most common influencers of hygiene and behaviour change.

Community-level leaders such as chiefs and village elders were also instrumental in delivering and influencing hygiene and behaviour change, especially in rural areas.

Comparing the PWDs and those without, the report said that significantly fewer PWDs understood that social distancing should be maintained in public places (67 per cent compared to 83 per cent).

“This translated to significantly less PWDs maintaining social distancing compared to persons without disability (77 per cent compared to 92 percent),” the report reads.

In terms of vaccination, significantly more older people had received vaccination at 24 per cent compared to those less than 60 years at 16 per cent).

The government of Kenya recognises that the inclusion of disability is a prerequisite to the achievement of national and international goals and that older persons are entitled to care and protection from the state.

Study shows Africa was penalised yet most Covid-19 variants came from Europe.
News
4 months ago

[WATCH] WHO chief says end in sight for Covid-19 pandemic

Newly reported Covid cases have dropped to their lowest level since March 2020.
News
4 months ago
Post a comment
WATCH: The latest videos from the Star
by Akello Odenyo Court Reporter
Eastern
03 October 2022 - 22:00
Read The E-Paper