• The group comprises of 300 African researchers, including some from the Uthiru-based International Livestock Research Institute.

• The scientists were recognised in a paper titled ‘The evolving SARS-CoV-2 epidemic in Africa: Insights from rapidly expanding genomic surveillance. 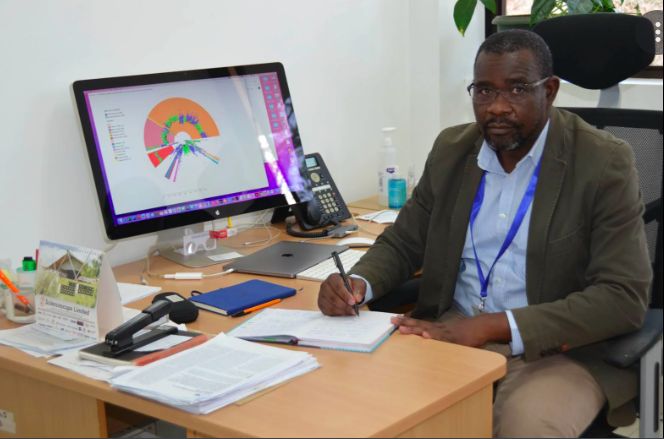 SURVEILLANCE: ILRI senior scientist Dr Samuel Oyola, a specialist in genomics and molecular biology, at his office in Uthiru.

Kenyan scientists have been recognised for helping Africa beat Covid-19 by rapidly sequencing SARS-Cov-2 variants in the last two years.

The group comprises of 300 African researchers, including some from the Uthiru-based International Livestock Research Institute.

“ILRI is delighted to have partnered with such an impressive group of scientists,” a senior scientist and specialist in genomics and molecular biology, Dr Samuel Oyola, said.

The scientists were recognised in a paper titled, ‘The evolving SARS-CoV-2 epidemic in Africa: Insights from rapidly expanding genomic surveillance', in the current issue of Science magazine.

The genomics lab at ILRI and its three centres of excellence for genomic surveillance was recognised by the African Centres for Disease Control.

The other two laboratories are in South Africa.

Scientists use a process called genomic sequencing to decipher the genetic material found in an organism or virus.

Oyola said the sequenced data has helped track SARS-CoV-2 variants circulating in Kenya and the continent.

"It has helped public health officials to monitor transmission dynamics and develop informed measures to control the spread of the virus in real-time,” he said.

Investment in Africa over the past year with regards to SARS-CoV-2 genotyping has led to a massive increase in the number of sequences.

They exceed 100,000 genomes generated to track the pandemic on the continent.

The results also show an increase in the number of African countries able to sequence within their own borders, coupled with a decrease in sequencing turnaround time.

However, they warned that sustained investment for genomic surveillance in Africa is needed as the virus continues to evolve, particularly in the low vaccination areas.

These investments are very crucial for preparedness and response to future pathogen outbreaks.

The publication highlights the fact that sustained investment for diagnostics and genomic surveillance in Africa is needed to not only help combat SARS-CoV-2 on the continent but also address diseases such as Ebola, HIV/Aids, tuberculosis and malaria.

“These investments are crucial for pandemic preparedness and response and will serve the health of the continent well into the 21st century,” Yenew Kebede, head of division of laboratory systems and networks at the Africa CDC vaccine development said.

The publication also showed—at least by implication—how the international response has failed (and continues to fail) some of the world's poorest countries.

The study shows, for example, that while most introductions of Covid-19 variants in Africa were seeded from viral lineages in Europe, Africa was often penalised with travel bans by the very countries that had introduced the virus to Africa.

“There are many lessons to learn from this work. Not all of them happy,” Oyola said.

He however said the swift increase in genetic sequencing capacity on the continent is clearly a major positive development.

“ILRI is playing a critical role in developing the capacity for pandemic preparedness and response in Africa through our advanced molecular and genomic technologies,” Oyola said.

Next Pandemic is coming, but we're not prepared –Prof Jaoko

Over 15 countries have made their financial commitments.
News
2 months ago
Post a comment
WATCH: The latest videos from the Star
by JOHN MUCHANGI Science Editor
News
29 September 2022 - 23:00
Read The E-Paper