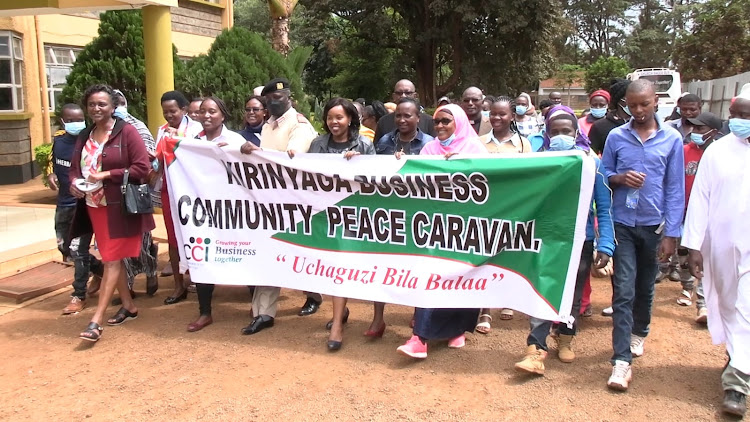 PEACEFUL POLLS Kirinyaga business community march through the streets of Kutus town during the unveiling of a peace caravan that will tour all subcounties with a mission to preach peace.
Image: WANGECHI WANG'ONDU

The Kirinyaga business community has urged residents to maintain peace during the electioneering period.

Led by their chairperson Eunice Wanjiru, the entrepreneurs stressed the importance of peace, saying it will promote unity and enable their businesses to thrive.

She said the business community has gone through frustrating times, especially during the Covid-19 season, hence a peaceful electioneering period was crucial for the resuscitation of their business.

Speaking on Monday in Kutus, Wanjiru said the election is a temporary season that could determine the state of the country’s economy, thus caution was important.

Wanjiru spoke during the launch of a peace caravan sponsored by the county business community. The caravan will tour all the subcounties preaching peace to the residents.

“We are one of the groups that are highly affected by a disputed election. Therefore, we saw the need to be partakers of an initiative to preach peace so that we cannot only have a progressive society after the polls, but understand the need to promote cohesiveness and unity.”

Her sentiments were backed by the vice chairperson Pauline Wangechi who emphasised the significance of peace after election.

She said most of the traders have no other source of income apart from their businesses which, if affected, stand the risk of bringing their lives to a grinding halt.

“Let Kenyans be mindful of their fellow Kenyans even as they support different political formations. Let’s practice mature politics devoid of chaos because we have a country to protect,” Wangechi said.

She also called on politicians to be in the lead in preaching peace and refrain from inciting their supporters with divisive remarks.

Emma Wambui, a member of the group and a local politician vying in this year’s election, called on her competitors to exercise tolerance and continually uphold messages that bring the people together.

She also asked Kenyans to refrain from being used to cause chaos and destroy other people’s properties.

Kirinyaga East deputy county commissioner James Wanyoike thanked the participants for their involvement in the exercise, saying the action was a clear indication of their patriotism.

He said every Kenyan has a responsibility to take care of the country.

“Business people have a great influence on the community due to the fact that they interact with a lot of people," he said.

"We are therefore optimistic that the caravan will be impactful and will help drive home the intended message.”

Wanyoike said the government would continue to partner with other influential groups in order to sensitise the community on the need to promote peace. 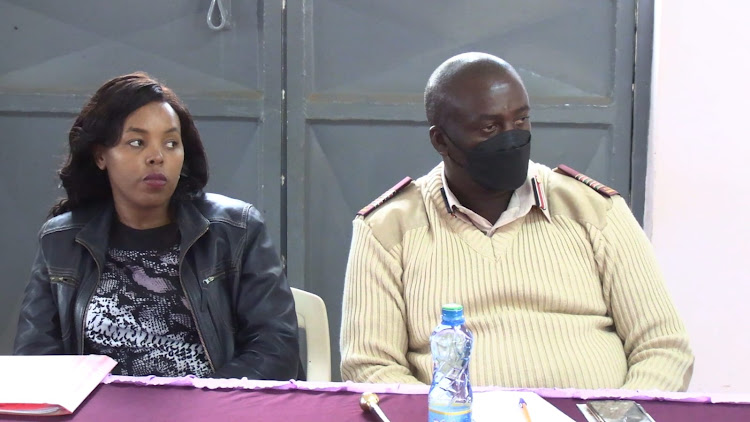 Kimengich says Uasin Gishu is harmonious, not a hotspot and everyone should prove it
Counties
5 months ago

Security officers asked to remain neutral when discharging their duties
Counties
5 months ago
Post a comment
WATCH: The latest videos from the Star
by WANGECHI WANG'ONDU
Central
28 June 2022 - 22:00
Read The E-Paper