Kimengich says Uasin Gishu is harmonious, not a hotspot and everyone should prove it

• Bishop Kimengich said it was regrettable that some counties including Uasin Gishu had been listed as hotspot regions ahead of the polls.

• He said leaders and communities in the listed regions should work for peace and unity to move the trouble spot label. 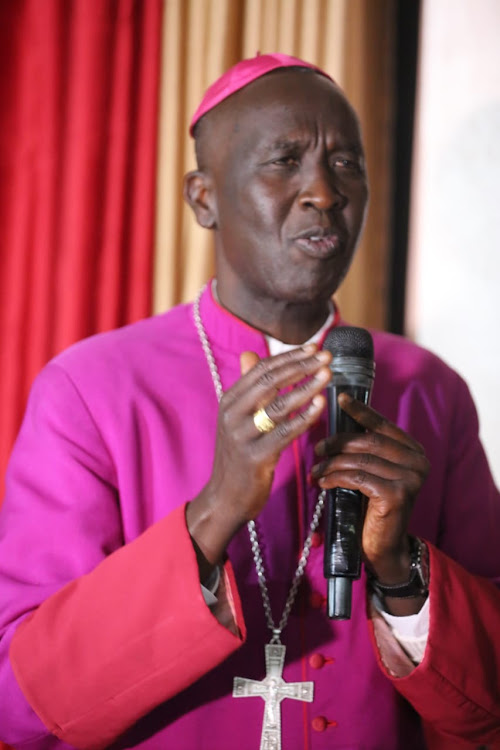 Catholic Bishop of Eldoret Dominic Kimengich has urged candidates to ensure they prioritise peace and unity during the August 9 polls.

Bishop Kimengich said it was regrettable some counties including Uasin Gishu had been listed as hotspot regions ahead of the polls.

Speaking on Sunday, he said leaders and communities in the listed regions should work for harmony to restore their good names.

“We have to keep peace this time to remove this tag of being known as a hotspot every time there is an election," Bishop Kimengich said.

He said elections should not be treated as a matter of life death but a just a normal procedure to get new leaders.

“Those we elect or those who lose are all our people and at the end we all need Kenya in peace and unity," the bishop said.

Bishop Kimengich said he had teamed up with leaders and other institutions to preach peace.

“We urge specifically our youth to ensure they are not used by anyone to cause chaos," he said.

A section of political leaders and the NCIC have also teamed up to educate residents on peace and unity.

Governor Jackson Mandago has said the polls will be peaceful in North Rift region despite reports by the NCIC indicating possible violence in the parts of the region.

He said the National Cohesion and Integration Commission was wrong that Uasin Gishu is a hotspot where election violence is likely.

Mandago said those spreading propaganda about possible violence in the region were misguided.

He said all leaders were free to campaign in the region and urged police to act tough on all those causing violence, including the tumult in Nairobi at Jacaranda.

“We have had Raila Odinga, Martha Karua and many others coming to Eldoret even on foot and we did not have any incidents. No one should come around to sell us fear because the elections in the entire region will be very peaceful," Mandago said.

He spoke in Turbo subcounty on Saturday. The governor has dismissed the NCIC report on hotspot counties unrealistic as concerns Uasin Gishu.

Candidates have pledged to keep the peace, he said.

However the NCIC has said it carried out an in-depth survey before releasing its recent report on hotspot counties with a likelihood to experience more violence.

Commissioner Dorcas Kedogo who has been visiting North Rift said the report was factual and based on information from residents in the listed counties.

The counties named as hotspots include Uasin Gishu, Nairobi, Nakuru, Mombasa and Kisumu. She said the report was useful to help leaders intervene to stop possible violence.

Elders in Uasin Gishu have criticised the NCIC, accusing the commission of spreading unnecessary fear by releasing the report without a basis for the possible violence.

“We are not a hotspot county and the NCIC should stop relying on propaganda to release such a misleading elder James Nyambane said..

But Kedogo said the commission carried out an actual ground survey and that the report was based on information from residents.