World Under 20 champ Wanyonyi, whWanyonyi, whose winning streak this year finally came to an end, noted there are a few areas he needs to improve on.

•He will be accompanied to Oregon by Olympic champion Emmanuel Korir, Cornelius Tuwei and Wanyonyi 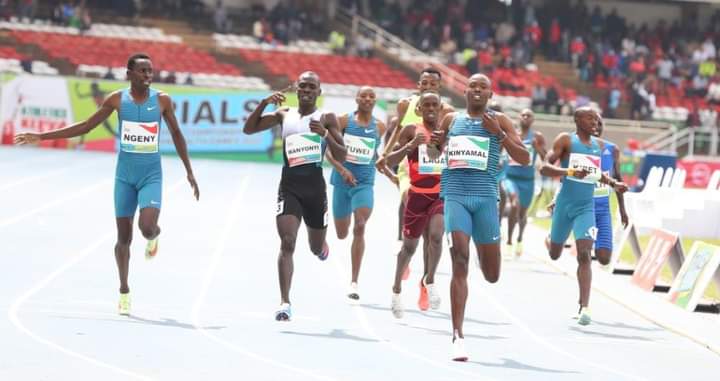 Commonwealth 800m champion Wycliffe Kinyamal says he is praying for a great performance at the World Championships in Oregon next month in preparation for his defence of his Club Games title in Birmingham in early August.

Kinyamal was on Saturday afternoon named in Team Kenya for Oregon and Birmingham and the National Police Service officer is ready to make the most of his first-ever appearance at the World Championships.

"It is going to be quite special because this is the first time I have made it to the World Championships. When I go there, I just want to fight hard to make it to the podium. It would mean a lot for me to perform well in Oregon, especially since I will be defending my title in Birmingham," Kinyamal said.

Up until then, it had been a disappointing few months for Kinyamal who missed out on the team to the Senior Africa Athletics Championship in Mauritius after a poor performance at the national trials in April.

However, he believes he is slowly getting back to his best after recent injury woes.

"During training in Eldoret, I fell down and injured myself. It's been tough for the past few months. I am glad to have won the trials and now the next step is to sit down with my coach, identify areas that need improvement and work on them in the next few weeks," Kinyamal said.

He will be accompanied to Oregon by Olympic champion Emmanuel Korir, Cornelius Tuwei and Wanyonyi.

The Birmingham-bound team, as far as the one-lap race is concerned, comprises Kinyamal, Wanyonyi and Ngeny.

Wanyonyi, whose winning streak this year finally came to an end, noted there are a few areas he needs to improve on albeit he believes he has made giant strides in his career since he won the junior title in Nairobi, last year.

“I have struggled with lane infringements in many races and today was not an exception. During the race, at the eight-metre mark, I was in sixth place so I had to push myself to the second. Training hard and running with my seniors has helped me a lot. I have gained experience and I hope I will be able to perfect my skill as time goes by,” Wanyonyi said.

Although he is eligible to defend his title at the World Under 20 Championships in Cali, Colombia in August, the 17-year-old says he is currently just enjoying himself in athletics without worrying about the calibre of opposition.

"My win in Rabat (Diamond League) has given me a lot of confidence. I came here believing that I was capable of winning this race and I am grateful to God regardless of the result. At the moment, I will compete in any race that comes my way... I am not restricting myself to the junior races,” he said.

AK name strong sides for the worlds and Commonwealth Games

•Awale, who is also the Bid chairperson, said the support from African nations is a big psychological boost to Kenya’s bid and will magnify the need ...
Sports
3 months ago

Despite dominating the women's 10,000m, the two-time world 5000m wants to concentrate on defending her title at the World Championship.
Sports
3 months ago
Post a comment
WATCH: The latest videos from the Star
by OMONDI ONYATTA and ABIGAEL WAFULA
Athletics
27 June 2022 - 05:00
Read The E-Paper