Despite dominating the women's 10,000m, the two-time world 5000m wants to concentrate on defending her title at the World Championship. 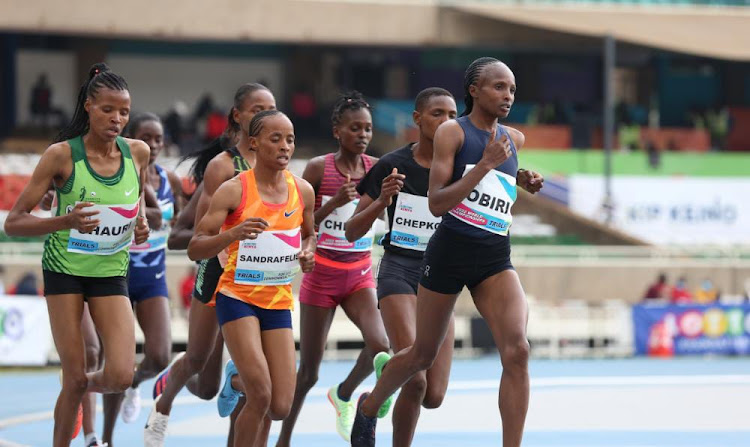 Double world 5,000m champion Hellen Obiri says she will not double in the 5,000m and 10,000m despite storming to victory in the latter race at the national trials for the Commonwealth Games and the World Championships.

"I am not sure if I want to run in both races in Oregon. I just came here to try out in the 10,000m because that is a good thing. Doubling up in both races at the World Championships will be a tall order considering I have also run in a lot of road races this year," the double Olympic 5,000m silver medalist said.

Despite fulfilling the favourites' tag, Obiri conceded the race was not a walk in the park.

"The race was tough. My opponents did not give me an easy time but I had come to try my luck, it's always good to try. I am going to do my level best in Oregon," she said.

At the same time, Mary Moraa was in seventh heaven after cruising to victory in the women’s 800m, defeating two-time Olympic 1,500m champion Faith Kipyegon.

Moraa said the win has boosted her charge for a first medal on the international stage.

"After my poor run at the national championships, I had to rethink and retrace my steps. My victory at the Rabat Diamond League really energised me and encouraged me to intensify my training upon return home," she said.

"I wouldn't want to pre-empt and say that I will win a medal but I am working hard to ensure I come back with a good result. My coach and I have come up with a solid training plan and I am confident of good returns."

Another athlete who went home with a grin on his face is World Under 20 3,000m steeplechase champion Amos Serem, who won a star-studded water-and-hurdles race.

"After I clinched the World Under 20 title, the next step was to make it to the World Championships. Admittedly, at one point I was fearful that this dream would not materialise but I am happy all my hard work has paid off," Serem said.

He admitted the pressure will definitely be on him as Kenya bids to avenge for last year's Tokyo Olympics when Moroccan Soufiane El Bakkali ran away with gold — the first time in 53 years the country has missed out on the title.

"I know there will be pressure but I think, with teamwork, we can reclaim our lost glory as a country. We need to improve on our speed,  especially in the last lap where the likes of Girma (Lamech) and Bakkali have been giving us a hard time," he said.

The trials continue on Saturday.

•Awale, who is also the Bid chairperson, said the support from African nations is a big psychological boost to Kenya’s bid and will magnify the need ...
Sports
1 month ago
by ALVIN KAUSAI and OMONDI ONYATTA
Athletics
25 June 2022 - 05:00