WOMAN ON A MISSION 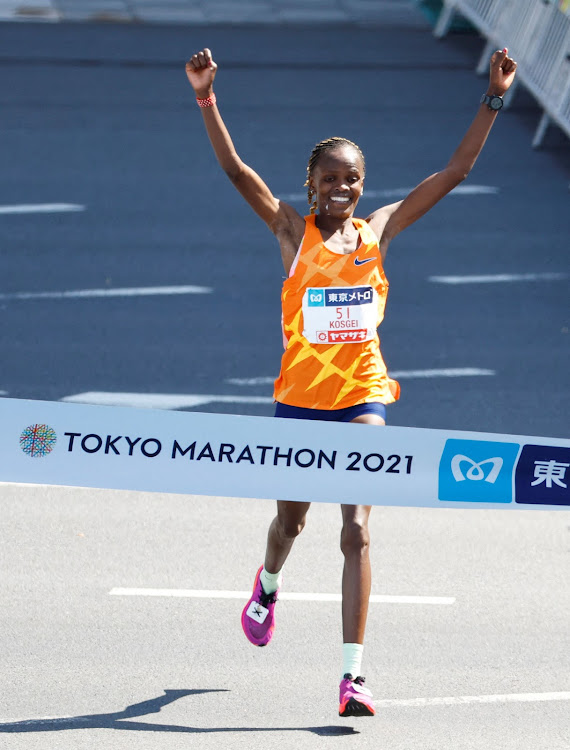 Brigid Kosgei of Kenya crosses the line to win the women's elite race at the Tokyo Marathon on March 6
Image: REUTERS

World marathon record holder Brigid Kosgei is an interesting character. Despite her gigantic stature in athletics by virtue of her successes, she comes across as shy and quite polite.

Interviewing her this week after running the fastest time ever on Japanese soil by a woman, this writer got the impression that she is a lady not given to much publicity or not even photogenic — addicted to the camera.

However, give her a microphone and a platform to speak her mind and Kosgei immediately oozes so much confidence and passion in talking about her life.

The two-time Chicago Marathon champion from Kapsait area in the North Rift does not shy away from speaking about the difficult circumstances under which she grew up to eventually write her name in road race history as the fastest female marathoner.

After arrival from Japan, where she set a course record of 2:16:02 at the Tokyo Marathon, she was treated to a luncheon by Stanbic Bank for which she is a brand ambassador.

Here, she took the opportunity to open up about an issue that has been gnawing at her heart for the longest time: young female school drop-outs.

"We need to do more for such young girls who cannot afford school fees. Education is the building block of success. For example, in very many secondary schools, you'll find so many girls who are always sent home for lack of fees. It is something so frustrating and discouraging for them," the Olympic Marathon silver medalist says. 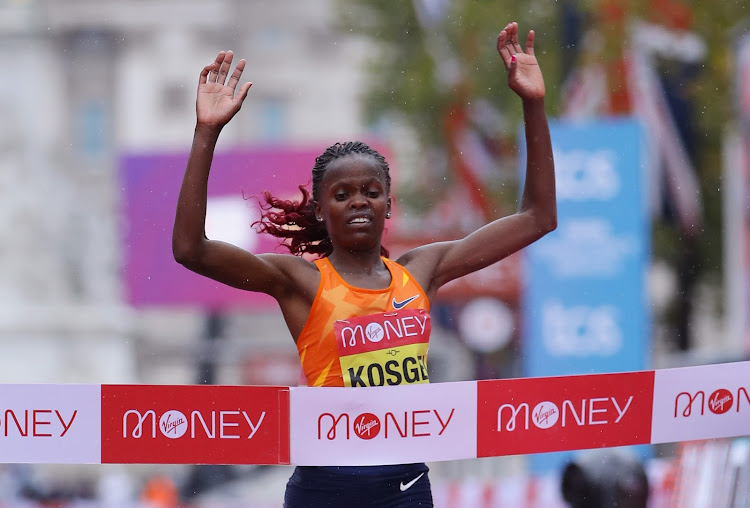 She believes poverty has pushed many young girls into early marriages and exploitation by unscrupulous men.

"The parents can only afford, let's say, Sh1,000 on different occasions so the girls can go to school. However, it is not long before they are sent back home to get more money and their studies are interrupted. Many of them lose hope and that's why you find some of them ending up in the arms of men who don't have the best intentions for them," Kosgei says.

"Who feels it, knows it", a song by Jamaican artist Romain Virgo would be a suitable life anthem for the two-time London Marathon champion.

Kosgei's cry for the girl child comes from a place of understanding how it feels to spend so many days out of school as a result of lack of fees.

The rationale behind her call for a scholarship fund for poor school girls is that she saw and felt the pain her mother went through in educating her.

"I never completed my education due to the same situation of lacking school fees. I only made it to Form Three. My mum felt helpless every time she saw me coming back home to look for money. There was a school principal who had sponsored me from Form One to Two but things became tough in Form Three,"  she recalls.

By then, her star in athletics was beginning to shine bright and this forced Kosgei into making a critical life decision.

"Due to the struggles, I started considering whether to quit studies and focus on running. My mum had also started saying that I was now more of an athlete than a student. So, I left school and went back to my mum's place. Later, I got twins and the rest is history," the 2016 Milano Marathon champion narrated.

However, this was never the plan in the first place. She says her desire had always been to finish school, get a good grade, and a great white-collar job.

Kosgei says this is the same case for many athletes who got into the sport as a means of escape from poverty.

"Many of us came from very poor families and could not access the education we desired. For me, running was the last resort. Most of the elite athletes who nowadays race all over the world had no option but to use their talents to change the fortunes of their families," she explains.

However, looking at what she has achieved so far, one could argue that Kosgei's decision to quit books and hit the road was a blessing in disguise not only for herself but for Pamela, her lastborn sister.

Although the youngster is not running for the same reasons as a her elder sibling, Pamela's meteoric rise mirrors that of Kosgei.

Experience is the best teacher and Kosgei uses her life story to advice upcoming athletes on how to survive in the sport, which can sometimes gobble up the most gullible.

Generally, sports, including athletics, has a brief lifespan as sportspersons will usually peak and afterwards watch as their form withers away.

In many forums, sportspersons have been advised to use their time in the limelight to invest their winnings so as to avoid the embarrassment of leading a dirt poor life in retirement.

However, the 2016 Honolulu Marathon champion believes it is not enough to invest but also to do it wisely and spend money prudently.

Kosgei says money evaporates quickly and that what might seem a lot may soon become inadequate if spending is not put in check.

"An athlete goes for a race and wins and then these millions are deposited in his account. Soon, the temptation to withdraw this money to fund unnecessary and extravagant lifestyles overwhelm some of them. Before you know it, there is nothing in your account...others even begin selling their investments or properties to cope with hardships," she says.

Despite the accolades she gets, Kosgei does not consider herself a superwoman but a normal human being with additional interests like other people.

When she is not training or competing, you are more likely to find her at home, undertaking chores around the house.

"I have a small farm where I grow vegetables. When I am free, you will most likely find me there. I also like to take care of laundry and just cleaning around the house," she says.

Indeed, this is what she will be doing in the aftermath of her Tokyo feat.

"My plan is to get some rest even as I strategize for the upcoming road races in consultation with the manager. As an athlete, it is important to respect your body and not overwork it lest you get injuries. I am glad my injury woes are over and so I just want to take it one step at a time," Kosgei says.

I plead with her to divulge the secret diet that keeps her in top shape and enables her to run for long distance.

"I love fish and chapati...I can't go a week without eating any of those two," she says amid laughter.

However, she adds: "At the end of the day, you cannot just take a balanced diet and think that it is a magic portion for you to become a champion. You have to work hard in training and push yourself to the limit. Only when you combine these two will you reap success."

In flesh and blood, she may seem normal...just like other human beings. However, inside this shy lady with a petite physique is a road race giant who has come, seen, and continues to conquer new lands as was the case in Tokyo.

A difficult past was the fuel Kosgei needed for the drive to the summit of the athletics world. This should inspire other people who have been in a similar situation as her childhood. 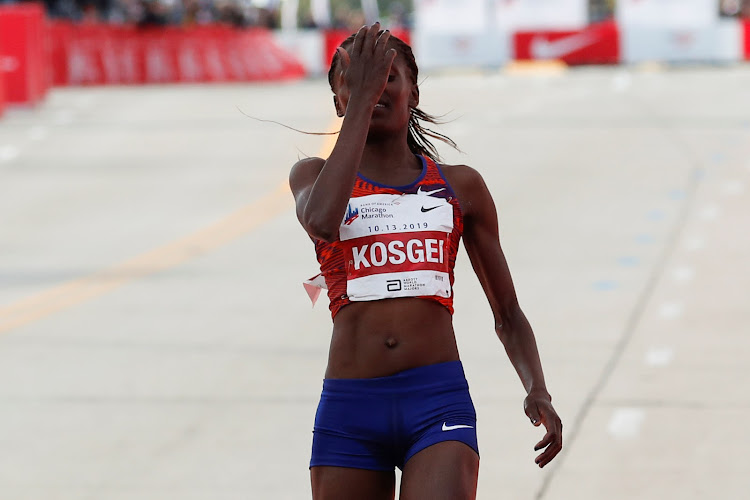 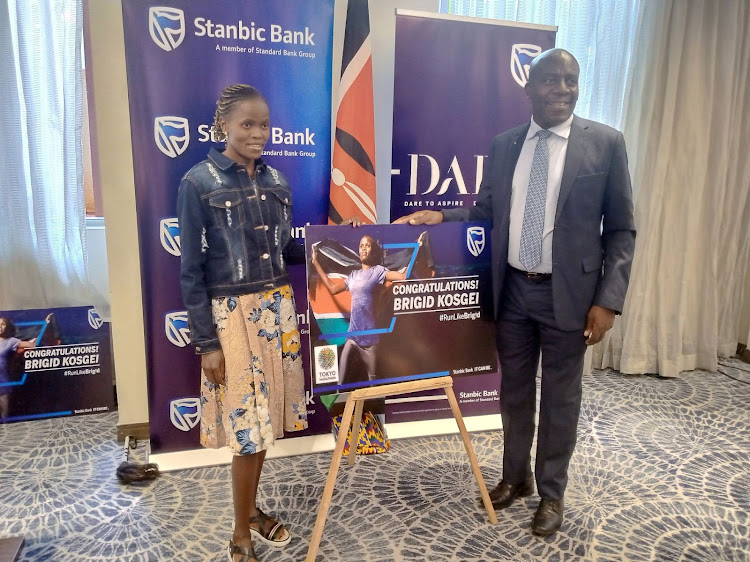 The duo returned to Japan for the first time after good performances at the Olympics and are subsequently optimistic of greater fortunes ahead
Sports
11 months ago
Post a comment
by OMONDI ONYATTA
Athletics
11 March 2022 - 21:00
Read The E-Paper