• Wildebeest are known by their nature to migrate over vast distances 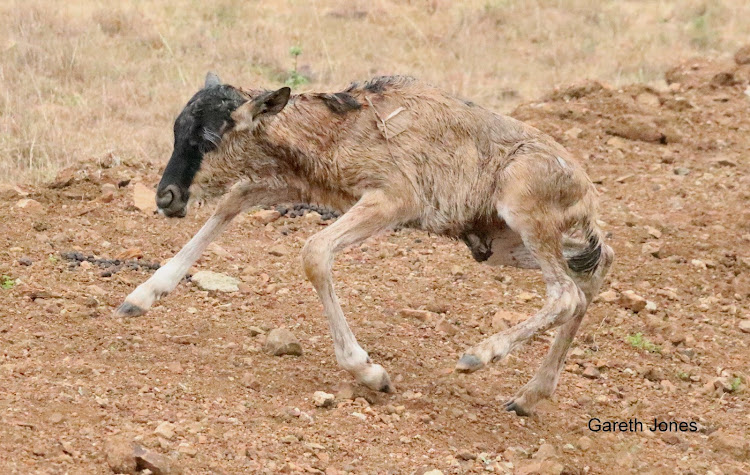 On a recent Sunday afternoon, we drove towards the No 10 murram heaps. Then from amongst a small group of wildebeest, a staggering wobbly wet little newborn calf emerged.

Wow! What a special moment to be privileged to witness this new life moment. After a while the calf could walk confidently, then amazingly the calf began to joyfully run around its mother. The calf even had an adventurous excursion as it ran about 50 meters from its mother.

All this activity and exercise had obviously made the new born calf quite hungry. We watched some precious mother & calf bonding moments as the calf instinctively began to look underneath its mothers legs for the teats. After a very short teat search the calf began to suckle nourishing mothers milk. In the wild many creatures need to rapidly adapt after birth, such that after a few hours they can actually move quite quickly with the herd. Humans are rather “soft and weak”, as after an entire year of life from birth most human babies can hardly walk.

The wildebeest entering the Nairobi National Park are the Eastern White-bearded Wildebeest (Connochaetes taurinus albojubatus ) a rare sub-species of gnu which consists of less than 5,000 individuals located east of the Rift Valley.

Wildebeest are known by their nature to migrate over vast distances. in the past, the area now known as the Nairobi National Park often had thousands of them moving through the park in search of grazing pastures. Sadly due to the Nairobi mega-city growing rapidly the traditional migration routes are being throttled by fences and construction projects. The park is becoming a “green island in a sea of construction”, it will be a very sad occasion if the wildebeest no longer return. I thank God that the wildebeest are back again this year.  This is such good news or should I say “gud gnu’s”?

For more information on the park link to this website www.kws.go.ke