Is the Catholic Church ready for married priests?

Pope Francis has warned that the church should move with the times, but conservative voices are wary of change. This amid concerns celibacy contributes to paedophilia in the church

• To counter the dwindling number of priests in the Amazon region, the church is considering allowing old, married men to serve.

• While some faithful welcome the idea, others feel a priest is supposed to be married to God and not distracted by worldly concerns like a wife or a family. 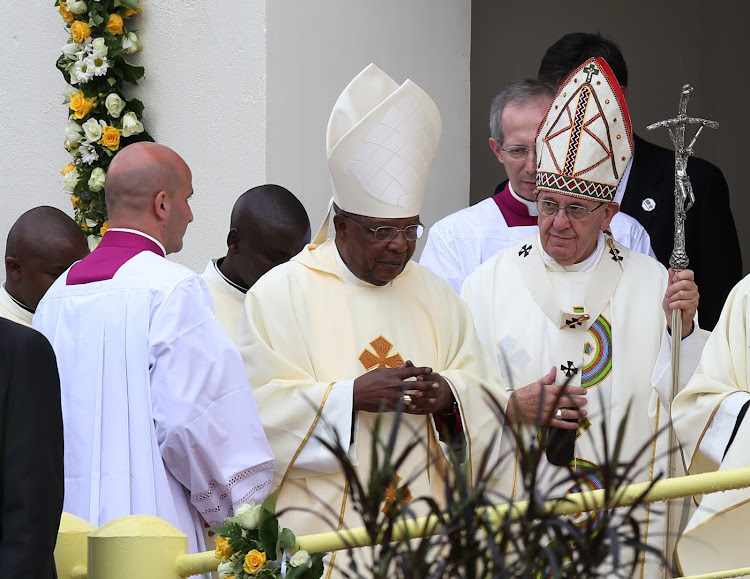 Cardinal John Njue and Pope Francis at the University of Nairobi grounds, where the Pope presided over a mass on November 26, 2015
Image: FILE

As the three-week synod meeting by Catholic bishops from around the world enters its final week, one topic is dominating the headlines.

It is the question of celibacy. Whether married men should be allowed to serve as priests in the Catholic Church.

The more than 250 clerics are meeting at the Vatican to discuss the future of the Church in the Amazon. The meeting in Rome started on October 6 and will end on October 27.

Other items on the agenda are climate change, migration and evangelism.

One of the items on the working document, the 'instrumentum laboris', is the suggestion that in remote parts of the Amazon, older, married men should be ordained.

While opening the talks, head of the Catholic Church Pope Francis blamed the recent fires in the Amazon on destructive "interests".

But what has gotten the attention of many is when he hinted that married men be allowed to serve as priests in the church.

The Pope indicated that priests, and indeed the church, should not be limited by traditions of the past.

During his sermon, Pope Francis also warned that some Catholic Church leaders risked becoming "bureaucrats, not shepherds". He urged them to have the courage to rekindle what he called the fire of God’s gift by being open to change.

Kenya is a country with more than 8 million Catholics. That they are conflicted is attested to by the fact that many former priests have married and founded their own churches, a trend that is replicated around Africa.

Kisumu Diocese Archbishop Phillip Anyolo says it is not a matter of being ready or not for married priests.

“That is an Amazon issue and they are looking for ways to have a solution. It touches on the issue of celibacy in priesthood, but Amazon is looking at it as a social issue," Archbishop Anyolo told the Star on the phone.

The Archbishop, who is also the chairman of the Kenya Conference of Catholic Bishops, said the matter in the Amazon has nothing to do with celibacy.

“When it happens, the society comes and says, why don’t they allow priests to marry? But from my perspective, marriage doesn’t solve that problem,” he said. 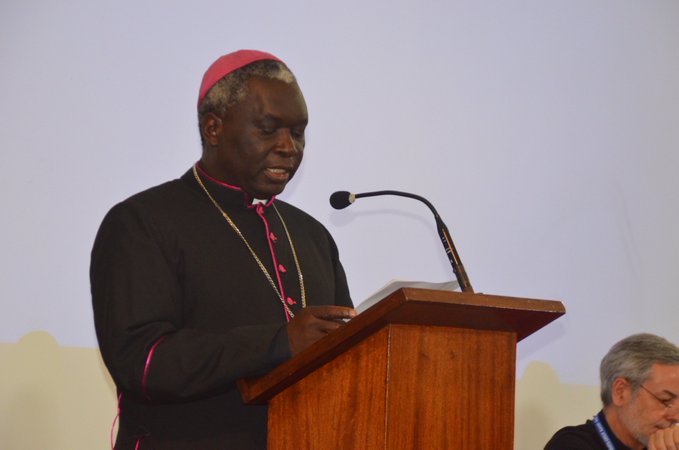 The working document stipulates that the candidates would need to be men who are particularly well respected, and they would preferably come from the indigenous communities where they intend to work.

To keep Catholicism alive and well, the church is looking into the possibility of allowing particular 'well-respected' priests to marry, to address the issue of dwindling priest numbers in the area.

Maryanne was born and raised in a Catholic family. She believes the solution cannot work in some countries as it touches on the issue of morals.

She is of the opinion that the society is struggling with too many vices, and it would not be easy to tell the chaff from the wheat in the selection of who should or should not be allowed to serve in the church.

On the other hand, Joseph, a staunch Catholic, is welcoming to the idea, and thinks it should be extended to the Catholic Church worldwide, including Kenya.

“The priests as tasked with various duties, among them marriage and relationship counselling. And I honestly think incorporating such individuals with experience about marriage in church would be a good idea,” he said.

Since only priests can consecrate the Eucharist, which is a key part of mass, it is estimated that more than 85 per cent of villages in the Amazon are unable to celebrate mass every week as a result of this shortage. Some only see a priest once a year.

“What I want people to understand here is that they want married people to help in the ministry but not that the priests should marry,” Archbishop Anyolo said.

Githurai resident George feels the matter would split the church and requires to be looked into with care.

He believes the Catholic Church is universal and has its doctrines and beliefs. Hence, coming up with ‘solutions’ for particular regions would be dangerous.

“The idea is to bridge the shortage gap in the Amazon, yes, but that doesn’t mean other areas have enough. So the change should be effected in all regions for uniformity,” George said.

Encouraging the church to move with the times, Pope Francis warned that Catholicism is in danger of being "smothered by the ashes of fear and concern for defending the status quo".

"If everything continues as it was, if we spend our days content that ‘this is the way things have always been done,’ then the gift of God within us vanishes," he said. 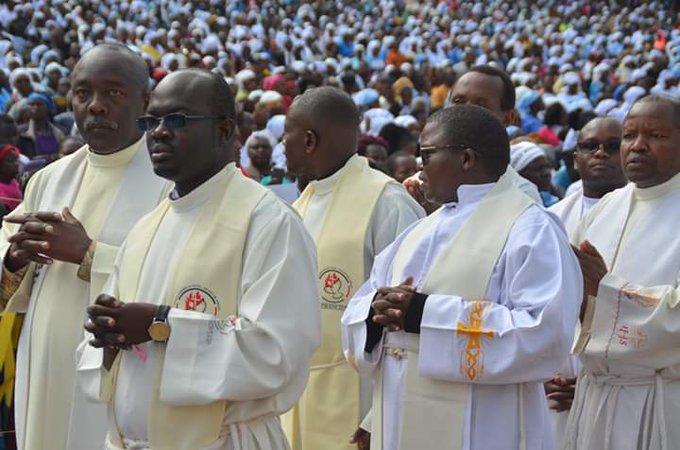 While there's never been any official doctrine that prevents Catholic priests from marrying, it's effectively been outlawed since the 11th century.

“That is a cry that will come because in the African context, people think Africans are there to marry but the African church is the one that has been very strong in the Vatican to say no,” Archbishop Anyolo said.

"When it comes to that question of celibate and not celibate, that is a question of faith in the society. Ask yourself in that society, is faith still there or not?"

Celibacy was introduced by the church to ensure that in the event of death, any possessions would revert to the Church rather than one's family.

The idea of allowing married priests to serve has sparked a fierce debate among the Catholic faithful, with the conservative sections of the church already opposing the idea.

They are of the opinion that celibacy is a vital part of a priests' relationship with God.

For many, a priest is supposed to be married to God and not be distracted by what some consider to be worldly concerns like a wife or a family.

“That is a weird solution,” Jane said. "I think what the church should do is to take priests from regions where they are enough to those regions that need more. After all, the word of God is a calling and requires that they be ready to serve and spread the gospel in any part of the world."

Some critics regard the idea of allowing married priests in the Amazon as a pretext to abolishing celibacy as a requirement altogether.

Some, however, believe that since he (Pope) is of Latin American nationality, he understands key challenges facing the region. 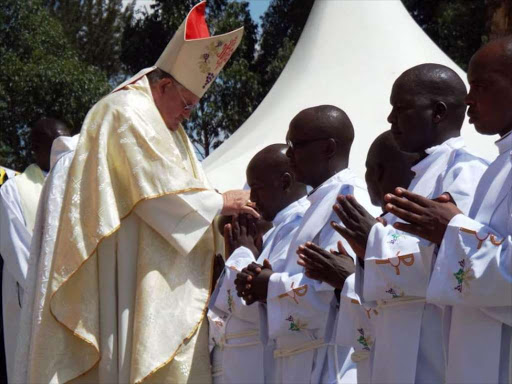 Bishop Maurice Crawley presides over ordination of new priests at the Catholic Church in Eldoret on January 19
Image: FILE

South American bishops have advocated the idea in an effort to address the shortage of priests in the region.

Some Anglican priests, estimated to be more than 200, who converted to Catholicism after leaving their Anglican and protestant faiths in protest at the ordination of women, have been allowed to continue in their ministries.

In most Orthodox traditions and in some Eastern Catholic Churches, men who are already married may be ordained priests, but priests may not marry after ordination.

There are some who say it is inevitable that, if married men being ordained is agreed for the Amazon, it could eventually happen in other regions with a shortage of priests, such as the Pacific islands.

But Archbishop Anyolo has dismissed that. “Other Catholics from around the world will not also want that to happen in their countries because we have said that is not the solution, and that is why it is an issue for us here," he said.

"As it stands, it is not an issue of the church now. The church comes out because the society looks at things like that.”

Many priests who have left the church to marry are starting congregations of their own throughout Africa.

Some of the priests were removed from the clerical state by their bishops, while others chose to leave in order to get married.

The new places of worship they’ve founded throughout Africa in many ways resemble Catholic churches in practice and belief.

Some of the African countries that have seen a rise in churches founded by married former priests are Kenya, Uganda, Ghana, Zambia, Malawi and South Africa. As many as 30,000 people are reported to be attending such churches in Kenya alone.

Peter Njogu is a former Catholic priest who now serves as the bishop of the Restored Universal Apostolic Church in Kenya.

He says he formed the church because of the Catholic Church’s failure to change with the times and respond to the needs of African Christians.

The church leaders in Kenya did not allow the former priests anywhere near the Pope during his visit to their country. They issued a statement making it clear that the former priests were no longer considered Catholic clergy and would not be meeting with Francis.

Njogu says efforts are underway to unify the new churches formed by married priests under a single spiritual leader, who supports marriage for priests.

The best candidate for the position is Emmanuel Milingo, the former Zambian archbishop who was excommunicated in 2006 and laicized in 2009.

The church's soul-searching comes as the Catholic Church goes through a global crisis brought on in part by the revelation of widespread sexual misconduct by its clergy. The problem has been blamed on celibacy in the church.

But Archbishop Anyolo says even though the issue of child abuse has found its way to the public from the church, the issue is a social problem.

"It is in the family, it’s all over and we have been fighting it all through," he said.

He said it is not just about child abuse but also there are numerous cases of abuse against the vulnerable in the society.

“We go to offices where vulnerable women go through this to get jobs, so it is a social issue but because it comes as a moral issue, it emerges through the church,” he said.

Anyolo was born on May 18, 1956, in Tongaren, Bungoma, and was ordained priest for the Catholic Diocese of Eldoret in 1983.

He was last year appointed as Archbishop of Kisumu by Pope Francis, taking over from Archbishop Zacchaeus Okoth, who retired.

He was elected chairman of KCCB in October 2013 and is currently serving his second term.