Re-tallying was called after Wangui Ngirici claimed the vote had been rigged.

• Earlier in the day independent governor candidate Wangui Ngirici, her lawyer Ndegwa Njiru, her husband Andrew Ngirici while in the company of a few of their supporters stormed the station demanding for a re-tally of the votes after which their request was granted.

• Ngirici, accused the IEBC county returning officer Geoffrey Gitobu of allegedly colluding with her political rival in stealing her victory. 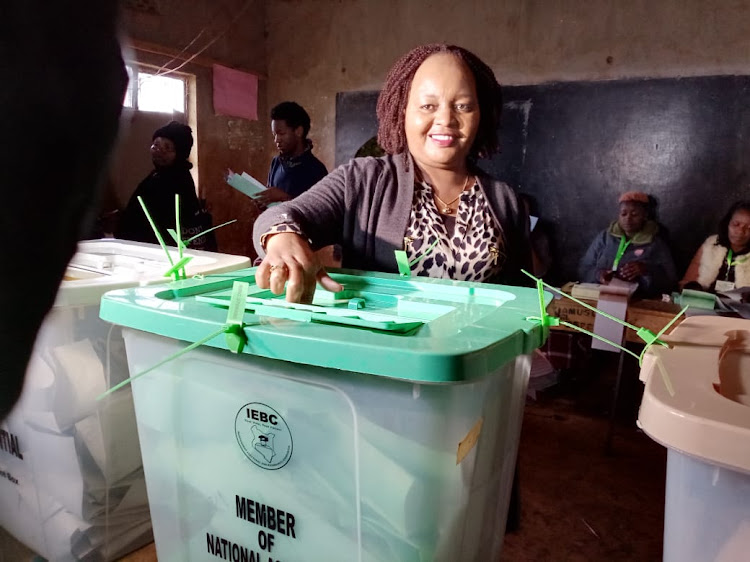 Kirinyaga governor Anne Waiguru has won the Gichugu constituency vote after a recount.

The recount was called after Independent governor candidate Wangui Ngirici claimed the vote had been rigged.

A recount, however, confirmed that results announced previously by the IEBC were accurate.

Speaking to the media after the recount, Waiguru challenged Ngirici to respect the will of the people saying Kenya is a democratic country.

She advised Ngirici to allow her complete her term after which she can give it a try.

"I want to challenge my opponent to accept the voice of the people and give another stab into the governorship in the next elections," Waiguru said.

She further condemned the use of goons in destabilising the county at such a crucial time.

Earlier in the day, Ngirici, her lawyer Ndegwa Njiru and her husband Andrew Ngirici stormed the tallying centre in the company of a few of their supporters demanding for a re-tally of the votes after which their request was granted.

Ngirici accused the IEBC county returning officer Geoffrey Gitobu of allegedly colluding with her political rival in stealing her victory.

An angry Ngirici said they have been undertaking a parallel tallying of the gubernatorial results from three other constituencies of Ndia, Mwea and Kirinyaga central which aligned with the IEBC' s apart from Gichugu's.

Wangui claimed Waiguru's votes were inflated by 6,000 votes in the constituency.

Waiguru who also made her way into the centre had earlier maintained that she had beaten the outgoing woman rep with over 15,000 in the constituency.

"She has only defeated me in Ndia with roughly a thousand votes and in Mwea with over 6,000," Waiguru said.

"However, I have trounced her in Gichugu with over 15,000 votes simply because I'm accepted in my home area as the saying goes charity begins at home," she added.

The governor accused Ngirici of disrupting the process as she is sensing defeat.

Security was beefed up as tension remained high for the better part of the day as supporters allied to Ngirici disrupted public transport along the Kutus-Kerugoya road.

At one point, the supporters descended on a county government vehicle which they alleged transported elections materials.

They now are demanding a re-tally of the votes in Gichugu constituency.
News
1 month ago