Interior CS Fred Matiang'i said the officers are not there for aggression.

• The extra police deployed followed the emergence of hate leaflets in the region.

• Matiang'i said eight suspects are in custody in relation to the circulation of the leaflets and are due in court Tuesday as investigations continue. 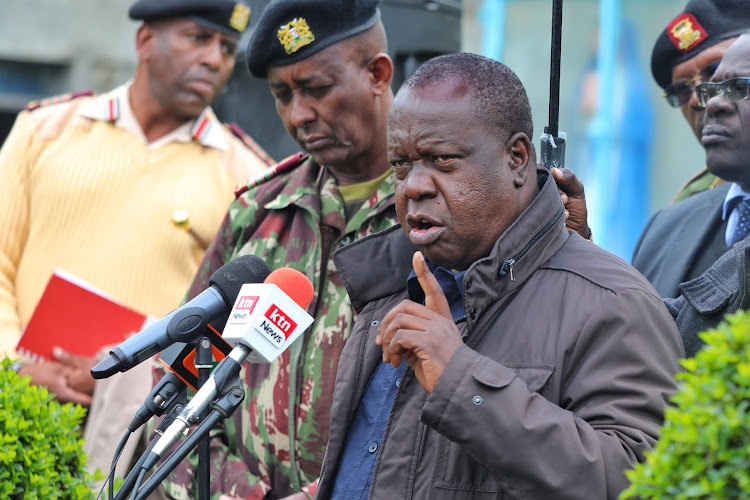 The National Security Council has ordered deployment of additional security personnel to hot spot areas in Rift Valley ahead of the polls.

"You are going to see increased deployment and patrol of more of our GSU here in Molo, Kuresoi, Nesuit and a number of places near here," Matiang'i said.

"We are going to deploy additional personnel in Eldoret in Uasin Gishu and we are going to increase our surveillance and patrols in the neighbouring regions," he added.

The extra police deployment followed the emergence of hate leaflets in the region the past few days.

Matiang'i said eight suspects are in custody in relation to the circulation of the leaflets and are due in court Tuesday as investigations continue.

The CS, however, assured the country and residents of Rift Valley in particular that there's no cause for alarm as the extra deployment of officers is for cautionary measures.

"We have received status update on what is going on in each of the counties and we are happy with the situation," Matiang'i said.

"They are not here for any particular aggression they are here to demonstrate to wananchi that we are ready to rise up to any challenge that may come up," Matiang'i said.

Rift Valley has in the previous election years been an epicenter of poll-related violence that has often resulted in casualties.

With the August 9 general election just six days away, every threat to security, no matter how remote, should be addressed with utmost urgency.

"Wananchi should be calm and confident that we will go ahead with the elections without a problem. We are totally ready we have sufficient resources," Matiang'i said.

He added that the ground surveillance team will be complemented by ariel surveillance for effective movement to areas which may experience security challenges.

Ruto had alleged the leaflets were printed and distributed by employees of President.
News
5 months ago