Ruto showers Gachagua with praise after face off with Karua

Ruto described him as " a successful elected politician."

•The Mathira MP spoke highly of Ruto, noting that the DP will never punish him if they  fall out.

•Gachagua was also the Personal Assistant of the then Minister for Local Government, Uhuru Kenyatta. 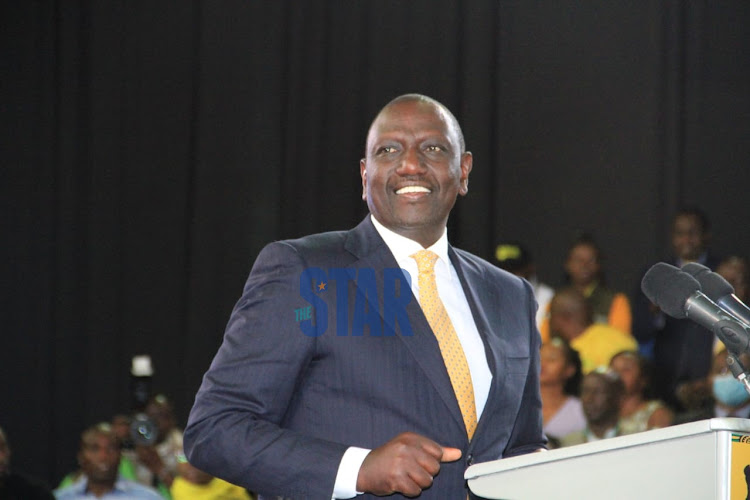 UDA leader William Ruto during the launching of his manifesto on June 30,2022 at Kasarani Stadium.
Image: EZEKIEL AMING'A

Ruto expressed confidence in Gachagua, stating that he has what it takes to push for the victory of Kenya Kwanza Alliance in the August 9 General Election.

"Congratulations Rigathi Gachagua my very able running mate. Kenyans are confident that in you we have a seasoned, passionate and focused leader to help us steer Kenya Kwanza to victory and the nation to prosperity. We thank almighty God na ubarikiwe sana. Never mind the media," he said.

On Tuesday, Gachagua faced  off with Azimio deputy presidential candidate Martha Karua in the second part of the presidential debate that lasted 90 minutes.

During the debate, the Mathira MP spoke highly of Ruto, noting that the DP will never punish him if they fall out after forming the government.

"Ruto will never punish me because he has no reason for that. We have agreed that we have no time for sideshows, personal differences and unnecessary inferiority complexities ,"Gachagua said.

"We have a huge task ahead and it is unimaginable for us to disagree. I have already been assigned to plan for our manifesto. We will not disagree. We are too busy to even imagine that," he added.

Last month, Ruto said that Gachagua's strong and bullish personality was the reason that he emerged as the best pick to become his running mate, accusing other politicians of having an inferiority complex.

“When I settled on him as my running mate, he was being opposed on grounds that he is very strong … that I needed someone who was soft and lowly placed in stature... But I insisted that I needed that strong person and highly placed,” he said while in Njoro constituency.

Gachagua has a Bachelor of Arts degree in political science and literature from the University of Nairobi.

He previously served as an Assistant Secretary in the Ministry of Home Affairs, District Officer cadet and Personal Assistant to the head of Public Service.

The Mathira MP worked as a District Officer in Kakamega and Laikipia Districts.

He was also the Personal Assistant of the then Minister for Local Government Uhuru Kenyatta.

Gachagua said that the plan was to intimidate Ruto, provoke him.
News
4 months ago