The team landed back from the event in Caxias do Sul, Brazil on Wednesday evening.

In Summary
by JULIUS OTIENO Journalist, Political and Parliamentary Reporter
News
19 May 2022 - 20:32 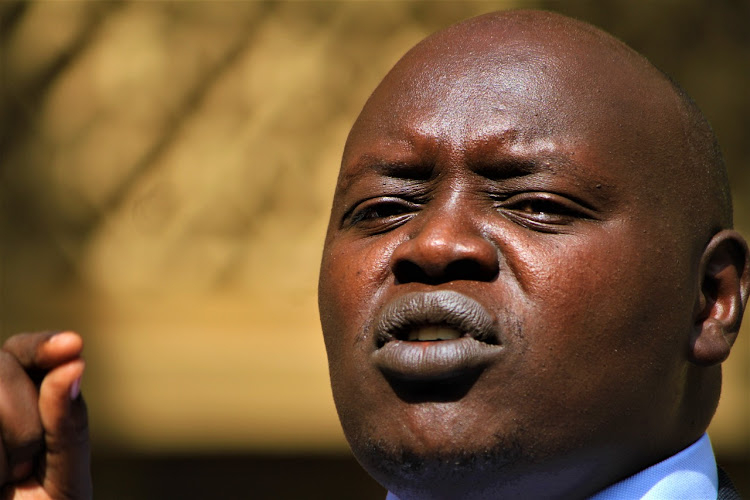 Nandi county senator Samson Cherargei addresses the media at parliament on the reception of the Deaflympics in Kenya on May.19th.2022.
Image: EZEKIEL AMING'A

Nandi Senator Samson Cherargei has questioned the manner in which Team Kenya in the concluded Summer Deaflympic Games, 2021 was handled.

Cherargei said the way in which the athletics were received at the JKIA and the rewards they received from Athletics Kenya and the Ministry of Sports did not match the team’s performance.

The legislator said the team would have been treated well given that they performed better than in the previous years.

“Despite their extreme performance, they were not accorded the dignity and honour befitting their performance,” he said.

“They had to hustle their way and this is not good for our athletes in this country,” Cherargei told a press conference at Parliament buildings on Thursday.

The team landed back from the event in Caxias do Sul, Brazil on Wednesday evening.

He said that the ‘mistreatment of the team’ underscores the push for reforms in the management of athletics in the country.

Despite previously proposed reforms from past events such as Rio Olympics scandal and the Tokyo debacle, a few or none are being implemented.

Reward schemes and stipends are given to winners for various categories have not been set clearly, he held.

“They are just called for tea and mandazi at State House. It is like tokenism and we want to finish that “tokenism” in our athletes and sports in Kenya,” he lamented.

In the just-concluded Summer Deaflympic Games, he alleges that ministry officials, sports journalists, and other government officials were paid higher allowances than the athletes.

“What justification would you give to pay allowances more to the ministry officials, AK officials and journalists over the athletes?" he posed.

"The athletes toiled, sweat and shed blood, but yet you give them low allowances and people who are logging in five-star hotels, massaging and Saunas and enjoying themselves you're giving them more allowances,” he held.

The senator has also queried the opaque selection of the technical team that accompanied the Deaflympic athletics, challenging AK officials to publish and tell the country how they selected the technical committee “because we know they are nepotism”.

The lawmaker has asked EACC, DCI and the Auditor General to conduct a special audit on the training that keeps our grants donated by various international partners to athletics Kenya.

He also wants the contract between the Sports Ministry of Sports, Athletics Kenya, municipal sports and the NIKE, and other sponsors that give a lot of millions made public.

In this year’s edition, Kenya clinched a total of 24 medals, five gold, seven silver, and 12 bronze to emerge top in Africa. Algeria was the second with a paltry five medals.

“Our team could have won more medals in men’s and women's marathons on the last day of the games on Sunday, May 15 but the athletics were disqualified for lateness,” Cherargei told a press conference at Parliament Buildings.

“These are some of the issues that we get disappointed with the organizers, the athletics Kenya, the Ministry of Sports, what are they doing until our athletes became late? he posed, saying Kenya lost gold because of lateness.

He has asked the Ministry of Sports, Athletics Kenya (AK),  National Olympics Committee of Kenya to up their game going forward.

He said the team set the bar high ahead of the Commonwealth Games set for July in Birmingham.

It was sweet revenge for Wandia, who had lost to Bley during the World Deaf Athletics Championships in Poland.
Sports
1 month ago

Kenya has so far garnered 24 medals in the championships.
Sports
1 month ago
WATCH: The latest videos from the Star
by JULIUS OTIENO Journalist, Political and Parliamentary Reporter
News
19 May 2022 - 20:32