The commission decided to call the meeting after both coalitions Azimio and Kenya Kwanza protested the Thursday deadline.

• Deputy President William Ruto’s side is also consulting on the way forward should IBEC insist that the running mate must be named by Thursday.

• The IEBC’s strong position is said to have triggered a crisis within Rai-la’s presidential campaign team as it was resolved that the ODM boss must shortens his US trip. 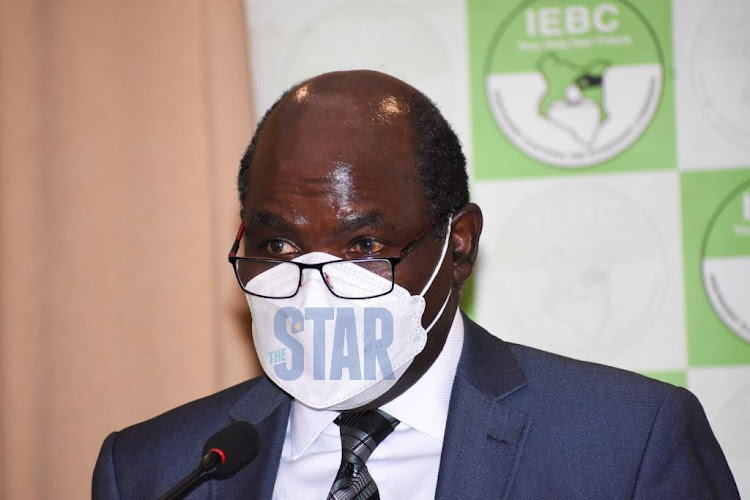 The Independent Electoral and Boundaries Commission Chairman Wafula Chebukati has called a crisis meeting on Tuesday to discuss the running mate deadline.

The commission decided to call the meeting after both coalitions Azimio and Kenya Kwanza protested the Thursday deadline.

“We have asked officials leading the presidential teams of all candidates to come to the meeting so that we can agree on this matter,” a commissioner said.

The meeting came as Azimio was discussing the possibility of filing a case seeking to quash the IEBC deadline.

Deputy President William Ruto’s side is also consulting on the way forward should IBEC insist that the running mate must be named by Thursday.

Both Ruto and Raila teams had objected the April 28, deadline and wanted the IEBC to receive the names between May 29 and June 6.

However, in a no-holds-barred letter on Sunday, Chebukati insisted presidential aspirants have until close of business on Thursday to submit the names.

The IEBC’s strong position is said to have triggered a crisis within Rai-la’s presidential campaign team as it was resolved that the ODM boss must shortens his US trip.

“This is a matter the presidential candidate must sign off in person, it is not an assignments that can be delegated because once that name has been submitted it is binding,” a high-ranking politician in Raila’s presidential campaign team said.

Raila was scheduled to remain in the US until Friday as part of his oversees engagements to bolster his diplomatic ties ahead of the polls.

However, the IEBC shocker threw a spanner in the works.

The Raila presidential campaign secretariat confirmed he has cut short his trip but cited the funeral programme of retired President Mwai Kibaki as the only reason.

“Azimio la Umoja One Kenya coalition flagbearer Raila Odinga will cut short his US trip and travel back home on Wednesday ahead of the state burial of the former President Mwai Kibaki,” a statement signed by Denis Onsarigo read.

Political parties are supposed to submit the names of their aspirants including presidential flagbearers to IEBC prescribed forms early before the clearance.

The commission will then have registration sessions with all the aspirants-at least 60 days to the polls, where they will be formally cleared to contest in the general election.

IEBC had planned a meeting with Raila’s team on Monday to resolve the stalemate over the deadline but pushed it to Tuesday morning.

“Due to engagements occasioned by the demise of the third president of the Republic of Kenya Mwai Kibaki, the commission hereby defers the meeting to April 26, 2022 at 10 am in the commission’s boardroom,” IEBC said in a statement.

The commission is expected to explain why the April 28 deadline must stand after it argued that a precedent was set in 2017.

Raila will on Friday attend Kibaki’s state funeral at Nyayo Stadium, where President Uhuru Kenyatta will lead the nation in according Kibaki the last honours ahead of his burial on Saturday.

While there are reports that Raila is yet to settle on his deputy, some big names from Kenyatta’s Mt Kenya region have popped up.

KABUGI: Why Kalonzo is better deputy choice for Raila than Karua

The alliance's top organ tasked a panel to recommend possible persons for the position.
News
3 months ago
WATCH: The latest videos from the Star
by JAMES MBAKA Deputy Political Editor
News
26 April 2022 - 07:03