• In 2017, President Uhuru Kenyatta assented to the Basic Education Amendment Act that was supposed to supply Public Schools with free sanitary pads.

• However, Inua Dada said that the programme’s numerous challenges have affected girls’ school attendance of school. 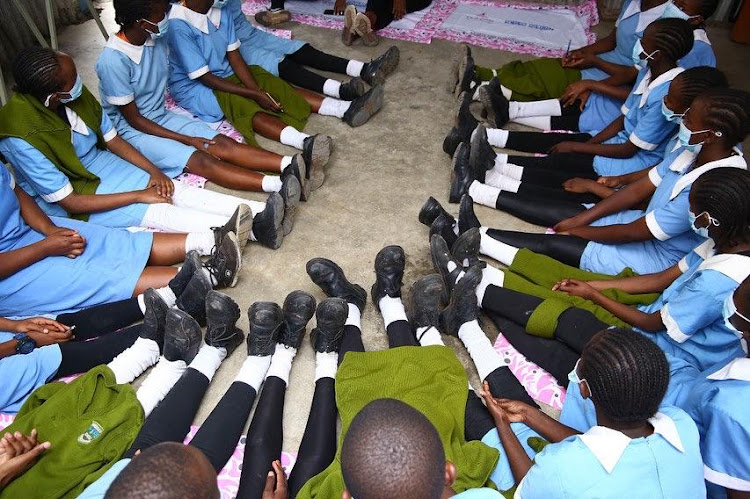 Girls in Nairobi’s Korogocho area are at risk of missing days of schoolwork every month on their period.

This is according to an analysis by the Inua Dada Foundation of girls in Comboni, Damascus and Mission of Hope schools in Korogocho.

In a statement, Inua Dada Founder Janet Mbugua said that despite there being a policy that mandates the state to provide free sanitary pads to school-going girls, the situation is not so on the ground.

“Research by the Ministry of Education found that girls lose on average four school days every month staying home while on their period, which on the bigger scale, before learning disruptions by Covid-19, translates to two weeks of learning each term,” she said.

“In four years of high school, for example, a girl would lose an average of 165 learning days,” she added.

In 2017, President Uhuru Kenyatta assented to the Basic Education Amendment Act that was supposed to supply Public Schools with free sanitary pads.

However, Mgugua said that the programme’s numerous challenges have affected girls’ school attendance of school.

“There are several reasons for the failure of the programme. In some cases, distributors appointed by the government failed to deliver and new contractors had to be found, causing a delay. In others, too few supplies were delivered, meaning that girls received fewer pads than they needed, and some went without any at all,” she said.

Back in 2020, the responsibility of allocating the pads was taken away from the Ministry of Gender and given back to the Education Ministry.

Education CS George Magoha also revealed in 2020 that the government had no money to keep funding the programme.

"If you calculate the current allocation against a population of 1.4 million girls, then at best we can provide sanitary towels for only four months. What happens for the rest of the year?" Magoha asked in a past article of the Star.

There have also been incidences of corruption surrounding the distribution of these sanitary pads, some being reported stolen and repackaged with the intention of selling them.

“Girls are supposed to be provided with free, quality sanitary towels in sufficient quantities, all funded by the state. But so far little has happened on the ground,” said Mbugua.

While Kenya has made strides such as dropping taxes on imports of sanitary products for women and girls, the impact is still felt by marginalised women and girls.

Mbugua said that in Korochogo, like many other informal settlements in Kenya, families live on Sh100 a day making them unable to afford to buy sanitary pads that go for Sh70 a pack, forcing girls to stay home and wait out their menses.

Attempting to address this early before gender stereotypes become deeply ingrained can help
News
4 months ago
“WATCH: The latest videos from the Star”
by SELINA TEYIE
News
02 March 2022 - 01:35