• He and three others are charged with abuse of office over a 2003 contract.

• One of the co-accused, former Post Master General Francis Chahonyo, is dead. 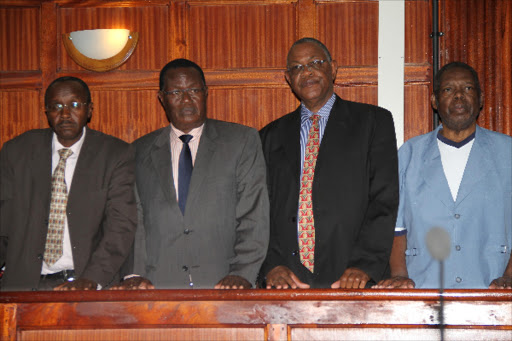 The Anti-Corruption Court has postponed a Sh928 million Anglo Leasing case against former Kisii Senator Chris Obure and three others after the investigating officer failed to show up.

The case had been scheduled for hearing before trial magistrate Anne Mwangi but it could not proceed since the officer, who is the last witness, was reported to be unwell.

The magistrate adjourned the hearing until September 26 when the investigating officer is expected to wind up his testimony in the 16-year-old case.

Obure who is currently the Chief Administrative Secretary in the Ministry of Transport, infrastructure, Housing and Urban Development is charged alongside former Information PS Sammy Kyungu, Samuel Bundotich and former  Post Master General Francis Chahonyo who has since died.

They are charged with abuse of office over a contract signed between the government and three US companies to supply internet services in 2003.

The contract, which Obure is accused of authorising to be signed between the government and Spacenet Corporation, among others, was worth $11.8 million (Sh928 million).

The witnesses further informed the court that the accused signed and approved all the security projects without following proper procurement procedures.

New facility in Kisii town will accommodate 2,500 traders
Counties
3 years ago
Post a comment
WATCH: The latest videos from the Star
by ALPHONCE MUNG'AHU
News
31 August 2019 - 06:00
Read The E-Paper