•Surprisingly, the church in unison joined her, singing the chorus energetically.

•Some went on nicknaming her as the queen of drama. 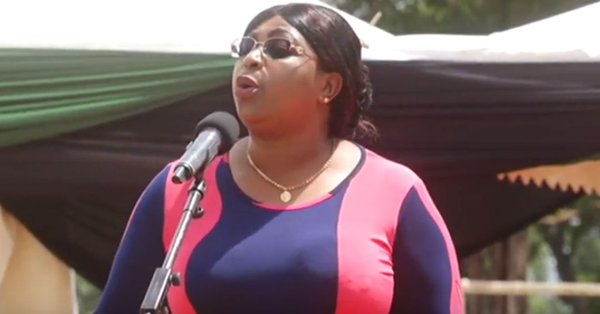 Malindi MP Aisha Jumwa during the church function in Bungoma county where she accompanied Deputy President, May 21, 2019.
Image: COURTESY

Malindi MP Aisha Jumwa is the talk of the town again after a video emerged of her changing the lyrics of a Christian worship song to praise Deputy President William Ruto.

This comes barely two weeks after Jumwa snatched a microphone from ODM secretary general Edwin Sifuna as he addressed mourners at a Kilifi burial.

During the latest incident, Jumwa had accompanied Ruto over the weekend to St Jude Catholic Church Muanda, in Bumula, Bungoma county, for a church service.

When she was handed the microphone, she did what she praised Ruto's performance track record before singing.

Attendees joined in her song.

Jumwa is not short of fiery moves.

Last year, the MP said that gone are the times when politicians showed up in public dancing as residents clapped for them.

She said the waists have other functions, not dancing.

Ruto has defended Jumwa since her expulsion from ODM for supporting him.

There were mixed reactions to Jumwa's song.

“Sometimes these our 'Honourables' take joke too far. What has gone wrong with Aisha Jumwa,” @ShadrackArodi commented.

@kangalapatrick commented that, “Corruption of a song by either Aisha Jumwa or Baba sycophants in saying Raila Baba, Raila Mwana and Raila Roho should be condemned by Christians.”

@JoshuaJerry,” Aisha Jumwa, we don't know which god you worship but you have to respect God, Christians and their worship songs,”

“Aisha Jumwa is playing high-level politics. She now trends more than 001 and has become the face of the DP in the coast. Soon she will become the Coast Region spokesperson,” @Muhianelson commented.

@josephmaina052 said that, “Those judging Aisha Jumwa please leave her alone. You are not better than her”

Jumwa snatched a microphone as Sifuna addressed the mourners.
News
3 years ago