•Jumwa was the master of ceremony during Mombasa Deputy governor William Kingi's father's burial in Kilifi.

• She was irked when Sifuna began politicking. 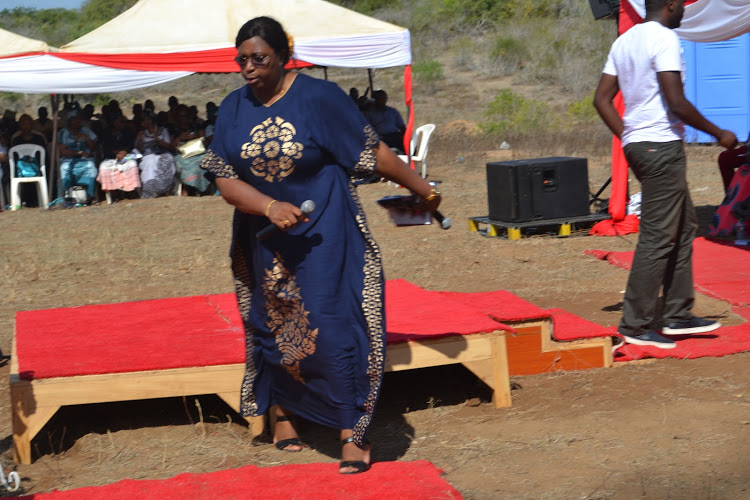 KOT has reacted after Malindi MP Aisha Jumwa snatched a microphone from ODM secretary general Edwin Sifuna as he addressed mourners in Kilifi on Friday.

The two were among attendees of Mombasa Deputy Governor William Kingi’s father's burial.

In a two-minute clip shared on social media, Sifuna is seen introducing himself as  ODM leader Raila Odinga's messenger sent to convey condolences to the family of the late Edward Benjamin Kingi.

Sifuna began his speech by stressing the need for the Orange party to be respected.

“As a messenger, I request to be given the respect the party leader would have been accorded. I have party responsibilities, and I do them without fear or favour. Sifuna did not make the law, and I am not targeting anybody,” he said.

It is at this point that Jumwa shot up from her seat and confronted Sifuna.

“Mr Secretary General, kindly refrain from politics out of respect for the dead. We are not here for ODM politics but to condole with the bereaved,” she said.

Jumwa further asked Sifuna to find another platform to speak on ODM issues.

“ We are here to mourn the dead and not politics,” she said.

It took the intervention of the bereaved, Deputy governor Kingi, to re-invite Sifuna to conclude his speech.

“I spoke with Raila Odinga on phone and he was to attend the funeral until something happened, and he decided to send  Sifuna to represent him,” Kingi told the mourners.

Jumwa also caused a stir when she failed to introduce one of her fiercest critics in the Coast region, Likoni MP Mishi Mboko.

Kingi instead introduced Mboko who had come to represent Mombasa Governor Hassan Joho who is away in Germany on official duties.

This move attracted ridicule and support in equal measure from Kenyans on Twitter.

Twitter user Donald Kipkorir said, "Aisha Jumwa has repeatedly said she has abandoned ODM... Today, she stopped Edwin Sifuna from speaking in a funeral ceremony... If she is man enough, let her resign from Parliament & re-contest on TangaTanga Party ... Aisha is poster-child of hypocrisy and corruption.”

Benard Peter said, "The wise move was to whisper to him in the ear and caution against speaking politics and ODM in the funerals. But she stooped low with the ranting though.”

Dan Musty said,“Politics should be kept out of funerals. Period.”

Jeff Mwange tweeted, "At least for the first time I congratulate her."