Kasarani OCPD promoted to Nakuru commander in wake of insecurity

This follows a spate of killing and manifestation of criminal gangs in Nakuru.

Interior Cabinet Secretary Fred Matiang'i has today effected a major police shake-up in Nakuru following a spate of killing and manifestation of criminal gangs in the City Estates. https://bit.ly/3QWEpr6 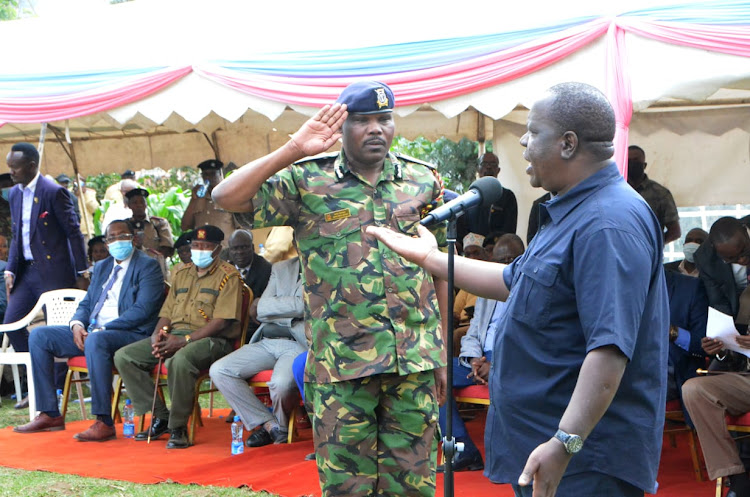 Dr. Fred Matiangi, Cabinet Secretary for Interior and coordination of national government introduces the new Nakuru County police commander Peter Mwanzo. This comes in the wake of a spate of killings that rocked the town recently. 29-06-2022 JEPTUM CHESIYNA

Interior Cabinet Secretary Fred Matiang'i has today effected a major police shake-up in Nakuru following a spate of killing and manifestation of criminal gangs in the City Estates.

Mwanzo replaces Beatrice Kiraguri after a short stint in Nakuru following the rise of criminal activities that are quickly spreading to the peri-urban areas of Bahati in Lanet, Mawanga, Ngomongo and Workers estates.

Matiang'i who was accompanied by top security officers declared war on the gangs and directed 24-hour surveillance in the affected estates which is expected to commence today.

The move by Matiang’i follows a spate of murders targeting women and girls who are attacked in their homes in broad daylight.

The victims are raped and killed by the gangsters who wrap their bodies in clothes or mattresses before torching their bodies. 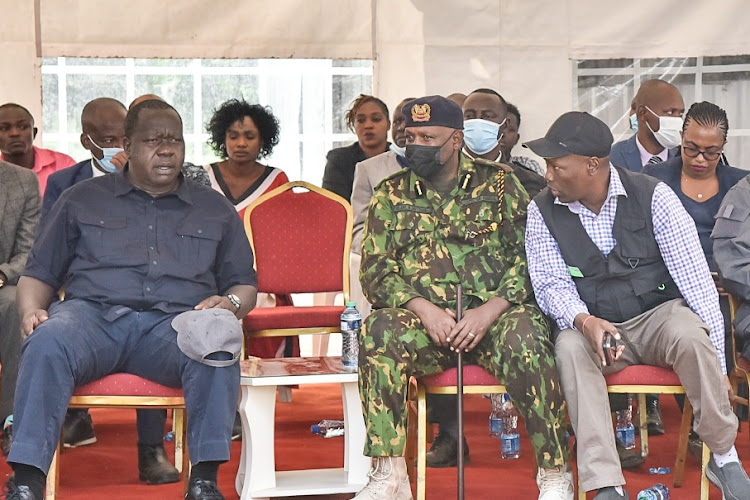 Police suspect a cult while others believe the arson is meant to hide evidence.

Matiang’s who had earlier attended a closed-door meeting with national and county security teams before addressing a public baraza at Workers Estate said the security operation will continue until the area is free of criminal gangs adding that the government could not surrender to criminals.

“A good number of gang leaders have been profiled and they will be pursued and prosecuted because the government has enough resources to protect its people and their properties,” he said.

He said it was unfortunate that the victims were being attacked in their houses as they peacefully went about their businesses.

The CS warned leaders who have been protecting, financing or bailing out the gang members saying that they would also be treated as criminals.

Relatives and friends have also been warned against hiding the gangsters as the police crack the whip.

He said local administrators, mainly chiefs and their assistants in the affected areas would be screened afresh claiming that some of them were abetting a crime.

“There is no way that activities such as oathing among the gangs can be happening without the knowledge of the chiefs and their assistants, those who will be found unfit to hold office with being sent packing,” he said.

Governor Kinyanjui said although Security was a national docket, he would cooperate with the National Government in eliminating the gangs.

“The County Government of Nakuru will release some of its vehicles to the police department to enhance patrols,” he said.

He also promised to install security lights in the peri-urban estates of Mawanga, Ngomongo and Workers.

Kinyanjui noted that residents were traumatised and men were afraid of leaving their wives and daughters at home for fear that they would be attacked.

He enied sponsoring, protecting, abetting or in any way protecting criminal gangs in Nakuru.
Counties
1 month ago

Arama denied claims that he had been summoned.
News
1 month ago
WATCH: The latest videos from the Star
by LOISE MACHARIA
Rift Valley
29 June 2022 - 17:19