He enied sponsoring, protecting, abetting or in any way protecting criminal gangs in Nakuru.

•He was summoned together with his Nakuru Tow West counterpart, Samuel Arama who was released earlier at about 12:15 in the afternoon.

•Addressing the media outside the DCI offices this evening, Gikaria denied any connection with the criminal gangs 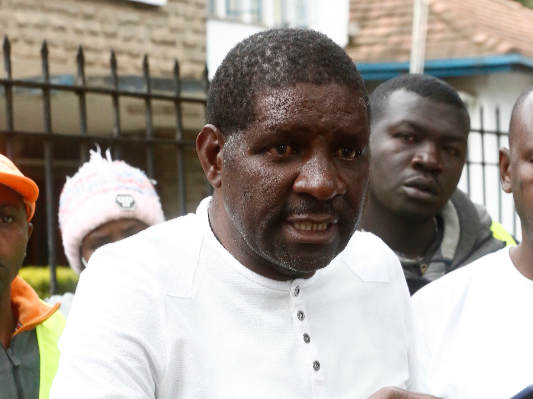 Nakuru Town East MP, David Gikaria was Tuesday grilled for more than nine hours in connection with criminal gangs that have been linked to numerous killings in his constituency.

He was summoned together with his Nakuru Tow West counterpart, Samuel Arama who was released earlier at about 12:15 in the afternoon.

Addressing the media outside the DCI offices this evening, Gikaria denied any connection with the criminal gangs.

He listed several attempts in which he tried to collaborate with the security agencies to eliminate them.

“I am a very peaceful Kenyan, a Christian and I a catholic by faith who subscribes to God and the ten commandments which prohibits killing,” he said.

He blamed politics for his predicament and dared those accusing him to take advantage of his situation now that he had been summoned by the DCI.

Gikaria said he was ready to cooperate with the police department in eliminating the gangs.

He challenged Interior Cabinet Secretary, Fred Matiang’i to issue a “shoot to kill” order on the criminal gangs in Nakuru Town East and West.

“I have done all that is in my capacity to finish the gangs which are growing and increasing by the day but I have been unsuccessful. I have witnesses whose offices I visited seeking assistance on the insecurity menace,” he said.

He said the best punishment for a person who kills another is death.

The MP wondered why a person threatening another with a knife or a machete would be arrested only to be released back to the society through bond or bail.

Gikaria added that he also brought the issue of organised gangs in Nakuru Town East to the floor of the National Assembly.

“I know of three schools in my area that are being used as recruiting grounds for the criminals. If one child recruits another five, then we are going to lose a generation,” he said

On the Bahati killing, the MP wondered how he could have organised that yet he only learnt about it last Friday when the seventh death was reported.

He consoled the bereaved families in Bahati and in his constituency who had been killed by the gangs.

So far, three Nakuru-based MPs have recorded statements with the police regarding the gangs following a spate of killings in Mawanga, Workers and Ngomongo area of Kiamaina in Bahati Sub-County.

During a security meeting a Workers last Sunday, Ngunjiri claimed he had information about who was sponsoring gangs in Nakuru.

He claimed that a certain politician had ferried youths in several buses into the affected areas with the aim of causing chaos in the August 9 General Elections.