• More than 1,000 residents say they will not allow the state officials to incite them against neighbours with whom they coexisted peacefully for decades.

• In a memorandum presented on February 10, they called for the President's intervention to ensure they keep the 300 acres. They said they have no confidence in government officials on the ground. 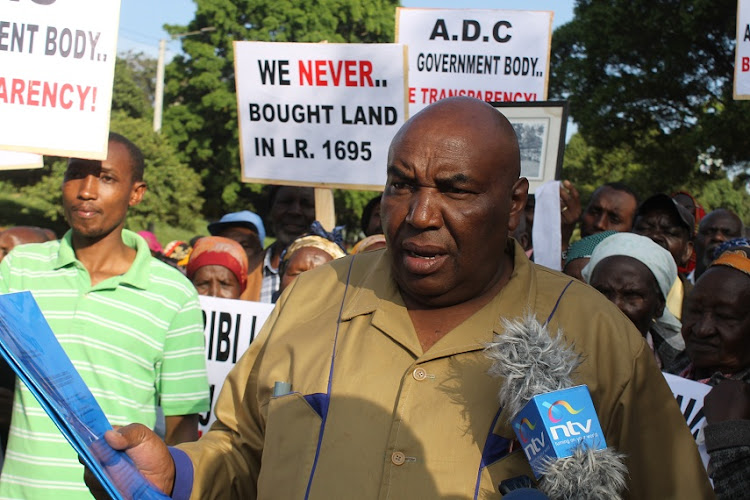 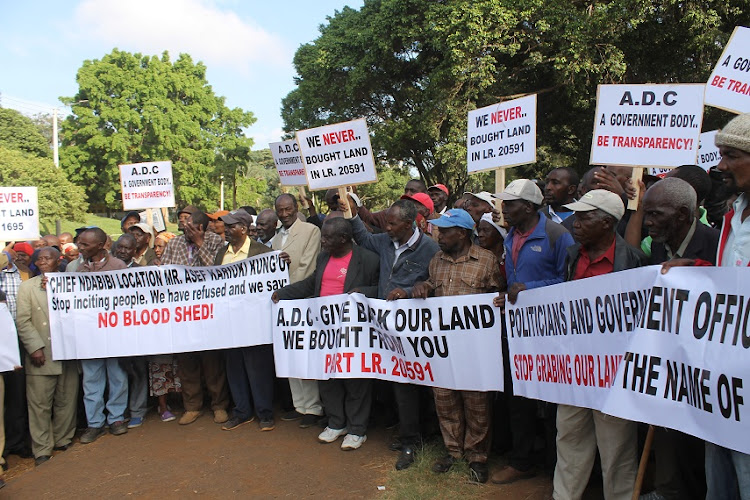 GIVE BACK OUR LAND: Ndabibi squatters demonstrate against what they call and grabbing during a demonstration at Uhuru Park in Nairobi on February 10.
Image: GEORGE OWITI

More than Naivasha 1,000 residents accuse some state officials, senior politicians and business developers of trying to illegally take over, subdivide and sell their parcels to unsuspecting buyers.

The disputed land was initially owned by the Agricultural Development Corporation parastatal.

They are members of Mwana Mwireri Rironi and Naivasha Farmers Company Limited. They said they bought the land from ADC on April 27, 1999.

The land is at Ndabibi location, Kongoni division in Naivasha subcounty, Nakuru County.

They say they will not allow the state officials to incite them to violence against their neighbours with whom they have coexisted peacefully for decades.

Land is a critically delicate matter, I will investigate the claims.

“We have had this land dispute problem since the 1970s after our fathers bought several parcels from white settlers and others from ADC. The government parastatal has since subdivided part of the land they sold to us [and sold it to] individuals we don’t know,” spokesman Edward Maina said on February 10 in Uhuru Park.

ADC had earlier denied getting involved in the alleged subdivisions and selling parcels.

“Land issue is a critically delicate matter, I will investigate the claims,” Matu said.

Maina said they will not allow their members to engage in violence over the land since several lives had been lost in fights instigated by government officials who should be meditating a lasting solution to the land dispute.

In a memorandum they sought President Uhuru Kenyatta’s intervention so they can keep the 300 acres, stating that they had no confidence in his representatives on the ground.

“We are Mwana Mwireri Rironi and Naivasha Farmers Company Limited registered in the Republic of Kenya, registration certificate No. 19/71 dated 26th February 1971, with a membership of 2560 persons. We are legal owners of all that piece of land known as PART OF L.R 20591 currently L.R 20591/68 as indicated in the sale agreement between ourselves and Agricultural Development Corporation,” read the memorandum to the President.

They wrote that they started negotiations to purchase the land in 1996 and on June 4, 1997, ADC gave them an offer letter Ref: MD/19/S/11/WKK. "We accepted the offer and visited the land several times before we interned into an agreement for 300 acres at Sh30,000, totalling Sh9 million.”

The squatters said, however, that ADC failed to honour its part of the bargain after subdivision of LR 20591, which was a block, and instead relocated them from the originally showed land L.R 20591 to L.R 1695, "in full knowledge that the parcel had a dispute between ADC and Ndibithi Farmers Company Limited".

“This transfer was effected on 15th February 2018 under the name Mwana Mwireri Naivasha and Rironi Farmers Company Limited and issued with the Title Deed L.R No 1995/5 with the same name to strangers who are not our members,” they stated in the memorandum.

“...we are sure that this move was deliberate on the part of ADC to accommodate senior government officers, politicians and well-connected persons in government circles. In our pursuit of justice, the area administration has been peddling lies inciting different tribes against each other, claiming that each intends to fight the other over the land issue, and in the process deny justice to deserving persons, creating confusion.”

The complainants said they had been denied access to their land by ADC due to hostility created by the administrator calling them invaders, who called them invaders intending to cause bloodshed.

They protested against a police post erected on the land to ‘protect’ the ‘beneficiaries of the land’ from them.

The squatters pleaded with the President Kenyatta resident to suspend any plans to issue any title deeds within Naivasha constituency until the ownership disputes are resolved.

They also want ADC to unconditionally release their title deed as earlier agreed. They want a public meeting held at Ndabibi Gathundia Primary School to be addressed by senior state officials. They want the exclusion of Nakuru county government officers, Nakuru administration officials and politicians — with the exception of the regional coordinator — to establish the acts on the ground.

The memorandum presented to the Office of President at Harambee House on February 10 was received by Director of Administration Paul Bata.

The petitioners said Bata intervened on behalf of the President by reaching out to the Rift Valley Regional Commissioner George Natembea on phone, requesting him to have an audience with the squatters.

Natembea promised to hold an audience on Wednesday.