• Doctors, medical teams and choppers unable to access some disaster sites because of washed-out roads and bad weather. 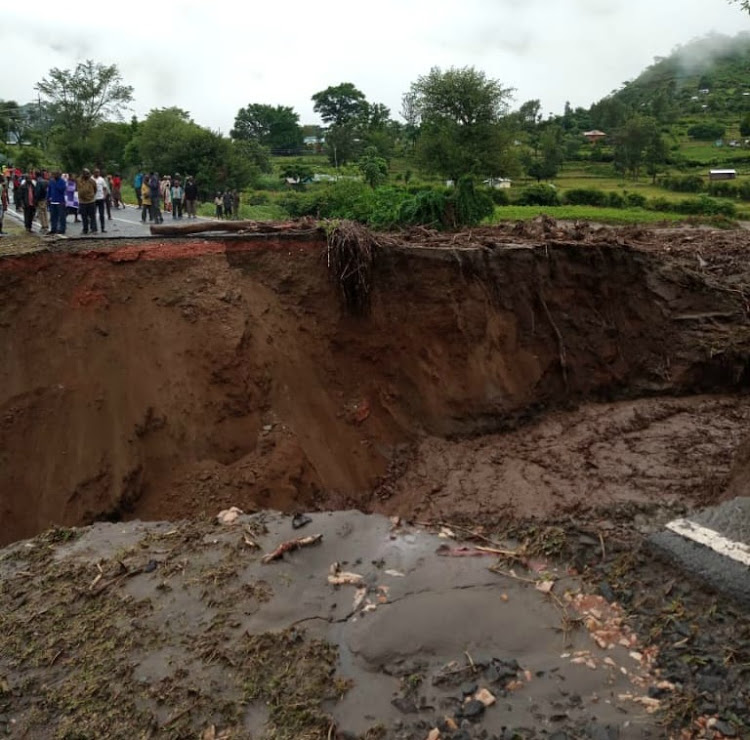 Two days the rescue mission began in the West Pokot landslide, a 34-year-old woman with two broken legs has not received treatment and is grounded at Tamkal Dispensary.

Another woman who broke both her legs died on Sunday night at Chesta dispensary after she was unable to get treatment.

Speaking to the Star on Monday, Health executive Geoffrey Lipale said they were unable to transfer patients to the county hospital for quality treatment.

"It’s too bad that we lost the woman who was rushed to Chesta dispensary. Weiwei Bridge has washed away and we were unable to transfer the patient. The chopper we were expecting to help us airlift the patient couldn't land due to bad weather," he said.

Lipale said they hope a military chopper will be able to land at Tamkal and rescue the woman, who is  in a critical condition

He said Moi Teaching and Referral Hospital had dispatched more than 30 physicians to help the injured.

“We have a specialist doctor who is supposed to go to  Tamkal Dispensary and help those with fractures but he might not be able to access the village if we don’t get a chopper,” Lipale said.

He said the death toll in the Saturday landslide was more than 53 people and the rescue was ongoing.

Many families have reported their missing relatives and it's feared the toll will rise, Lipale sad.

“Yesterday evening we received seven more bodies raising the total to 14  at our morgue. Four bodies have been transferred to Kitale Morgue, two of them are young children,” he said.

Many bodies were dismembered, he said, making it difficult to make the identification," the official said.

“It will be hard to identify the owner of the leg since most recovered bodies are in bad shape," he said.

Most of the bodies were recovered five to 10 kilometres from the scene of the landslide.

Most of the bodies have been carried away by the floods and many families fear they will not be able to recover bodies of their loved ones for a decent burial.

The county hospital has admitted at least seven patients. It has discharged 23.

Doctor Moses Deng said that most of the patients are in stable condition since they sustained only minor injuries.

He said two patients had been transferred to Moi Teaching and Referral Hospital in Eldoret.

Lipale said that they have recovered 20 bodies butKapenguria county morgue has the capacity to handle only 14 bodies.

“I thank our counterparts from Trans Nzoia for helping us store the bodies," he said.

More than 10,000 people have been displaced by the landslides and are appealing for humanitarian aid.