Mandago’s talks with Kikuyus fail to end conflict with Buzeki 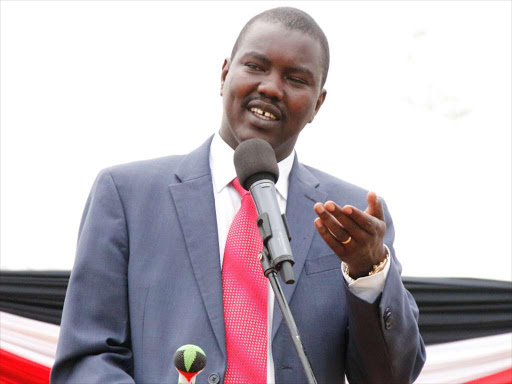 Kiprop, known as Buzeki, lost to Mandago in the Jubilee primary, and is running against him as an independent. He poses a big problem for Mandago and refuses to step aside.

It was meant to call a truce betweenthe leaders who have been arguing over the Kikuyu community’s support for Buzeki.

“We met but nothing was agreed,” Chomba said. He saidPresident Uhuru Kenyatta and Deputy President William Ruto should let residents elect a leader of their choice.

Last week, Uhuru at White Castle Hotel, Eldoret, yielded to pressure, and even spoke Kikuyu to urge his community to coexist with Kalenjins to ensure peace. He urged Kikuyus to “work with the majority”. Buzeki has refused to back out of the race. He has launched a major campaign and held a big rally yesterday at Munyaka market outside Eldoret. This while Uhuru was meeting Jubilee candidates at State Lodge.

Buzeki has called Mandago “a Ruto project who stands for nothing”. The DP Ruto said Mandago won the primary and deserves to be supported by all losers, including Buzeki. He urged Buzeki to back out.

Post a comment
WATCH: The latest videos from the Star
by MATHEWS NDANYI @ndanyi_mathews
Rift Valley
13 June 2017 - 02:00
Read The E-Paper