Do not sell scarce land - Nkedianye 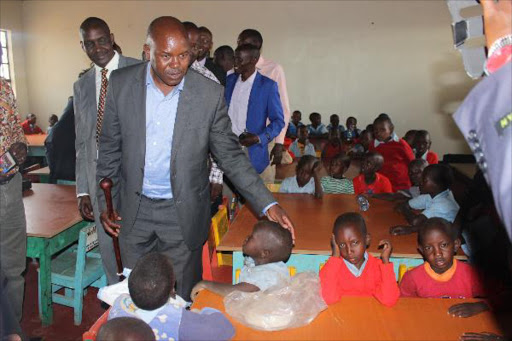 Governor David Nkedianye at Kerero ECD centre in Namanga where he distributed shoes from the county government on Thursday. He told the Maasai people yesterday to stop selling land.Photo/Kurgat Marindany

He made the call at Kajiado from Namanga ward where he visited schools and donated sanitary towels and shoes to children in Kerero and Ormanie.

“Land is shrinking at a fast rate and livestock are reducing in large numbers because they have no more vast land to graze. I am telling my people to sell their land at their own peril,” Nkedianye said.

Two years ago the governor put a stop to all land transactions.

Former acting Lands CS Fred Matiang’i while on a tour of Kajiado late last year, told Nkedianye to go slow on what he termed “reckless” pronunciations on land matters.

He told Nkedianye he had no right to deny residents their right to develop or sell their property.

Matiang'i said even the President does not have a right to comment on private property such as land.

In the constitution, private land is a sole property of an individual or group of people and owners do not require permission of any state official to develop it unless they are seeking a change of user on their land property.

Speaking to the Star on the phone, he said private developers can only seek approval from the county governments when they want to subdivide land.

Most residents in Kajiado have always questioned the intention of their governor at the time they want to raise money to develop their land or sell to get school fees for their children.