“Kenya belongs to all of us and if the country falls, we all fall," Oguna said.

• The retired lieutenant advised candidates who feel aggrieved with election outcome to challenge in court other than resorting to violence.

• He said Kenyans will be presented with the enviable opportunity to participate in choosing new political leadership - from a new President, all the way down to Ward representatives. 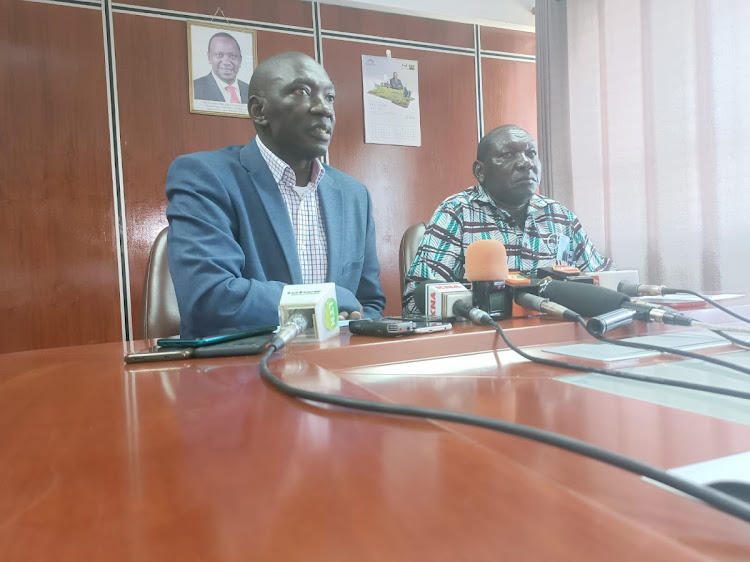 Kenyans have been asked to maintain peace and unity during and after the August 9 general election despite the election outcome.

Government spokesperson Cyrus Oguna said there is life beyond the election and asked Kenyans to understand that in any election contest, there is a winner and loser.

“Kenya belong to all of us and if the country falls, we all fall. Nobody shall be spared. Peace, prosperity and economic development in the country therefore depend on each one of us," Oguna siaid.

Over 22 million Kenyans will be going to the ballot on Tuesday to elect the fifth president and other leaders.

“Let all join hands together to prosecute for peace and to do our patriotic duty by coming out in large numbers to vote peacefully,” Oguna added.

The retired lieutenant advised candidates who feel aggrieved with election outcome to challenge in court other than resorting to violence.

Oguna pointed out that the Independent Electoral and Boundaries Commission (IEBC) has repeatedly assured of its preparedness and commitment to deliver a free and credible election.

“It is now time for 22.2 million registered Kenyans to exercise their democratic right to vote for the candidates of their choice,” Oguna said.

He said Kenyans will be presented with the enviable opportunity to participate in choosing new political leadership - from a new President, all the way down to Ward representatives.

“Voters will give the new team the mandate to steer the affairs of the country for the next five years. Whoever we vote in will set the country on a certain trajectory, just like the first four previous Presidents did,” Oguna said.

He said each of the four regimes have left a permanent mark on the country, and Kenyans must be conscious that the fifth President will chart a new path for Kenya.

“These are rights that we should not take for granted, because there are jurisdictions where such rights are restricted,” he said.

Oguna called on all the registered voters to come out to cast their vote on the big day.

“It is important for all of us to remember and appreciate that we have made great strides in economic development and managed to position our country as an anchor nation in this region,” Oguna said.

He stated that Kenya has made tremendous achievements and is among the most attractive investment destinations in Africa.

“These are peace dividends that have been made possible through the contribution of every citizen. We must therefore guard against the possibility of undermining our hard-earned stability by using our rights and privileges responsibly, lest we roll back all the gains that we have so far made,” Oguna said.

He urged citizens to be careful not to be hoodwinked to accept the trade of our birthright for unrealistic promises from politicians, some of whom are of dubious character.

“We must therefore be careful to judge aspirants by their track record of honesty, integrity and dedication to service to mwananchi. Let us not be swayed by some of these antics that have now become the mainstay of our politics,” Oguna said.

The government spokesperson appealed to political leaders to exercise tolerance and preach the gospel of peace.

“As Government, we wish to assure the public that we are committed to free and fair elections conducted in an environment of peace, and that all preparations for successful elections are complete,” Oguna said.

The Ministry of ICT, he said, has rolled out robust ICT infrastructure for seamless communication support to elections.

Oguna said the Ministry of Interior has put in place all necessary security and other measures to ensure that elections are conducted peacefully.

“As the country goes into the election, it is imperative that the politicians and electorate should play their part in promoting peace in the spirit of patriotism to our motherland and loyalty to the flag of the Republic of Kenya,” he said.

Oguna warned Kenyans to shun those who use foul or indecent language during public rallies, or on social media platforms.

“We should not condone language incitement to violence, ethnic profiling, or displacement. Leaders should know the voter is their employer,” he said.

North Rift residents urge quick announcement of results so there is no tension.
Counties
3 months ago

Chebukati said they are prepared for a free, fair and credible elections.
News
3 months ago

No one will interfere with results transmission - Safaricom