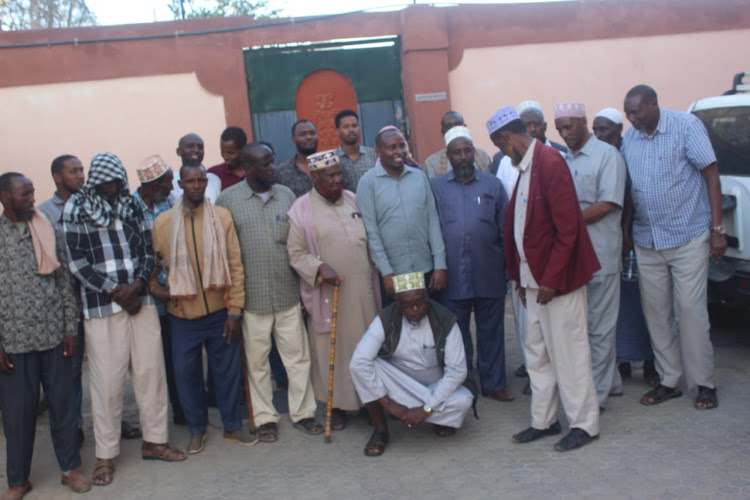 Gabra elders in a press briefing.

Gabra elders and residents from Moyale sub-county have lauded Marsabit Governor Mohamud Ali Mohamed for nominating five of their kins to serve in his government as chief officers.

The elders led by Nurow Mahad Dima welcomed the nomination, saying the governor has indicated his readiness to work with all communities in the county.

Nurow said the county boss has reaffirmed his commitment to embracing all tribes in the county for the sake of development.

He said it was the first time the Gabra community from Moyale was considered for such a position and thanked the governor, saying he has done a befitting thing.

He argued that the five nominees from his community are professionals who have displayed excellent and outstanding Performance in various institutions and organizations they served.

According to Edin Qalla, the governor remained true to his word while unveiling an inclusive government as he balanced tribal and regional interests.

He said the governor also considered gender balance by nominating seven women to serve in his government as chief officers.

The elder urged the county assembly members to expedite the vetting process so that the team can embark on the business of serving the people.

He said the county was faced with a dire need for famine relief and drinking water occasioned by prolonged drought.

He asked the nominees to ensure that they serve residents diligently and with integrity if they are confirmed by the county assembly.

"I want to take this opportunity on behalf of the Gabra community to thank Governor Mohamud for picking his chief officers nominees in a balanced way across the county," said Hajj Apicha

He said the Gabra community from Moyale was neglected in the former reigns.

"As Gabra community from Moyale we are happy that our son and daughters have been picked to serve in Governor Mohamud's administration," he said

He further said those nominated have what it takes to run the government agenda, describing them as committed and hardworking members of the community.

His sentiment was echoed by chief Ibrahim Guyo who said the governor had tried to balance the nominations by considering the interests of various groups including young people, women and special groups and it reflects the county's face.

He asked those nominees to live up to their expectations and serve residents with decorum to transform the county by ensuring that the county attains a meaningful development.

Joining the elders in thanking the governor, Habiba Abdi stressed that it was time to work together to achieve development.

The nomination of four nominees from minority communities also prompted residents to burst into celebration.

"We are happy minority communities like Turkana, Dasnach , Samburu and Konso have been recognized and nominated for the position of chief officers. We thank the governor for keeping his promises of including all communities in his administration," said Sadia

She asked the governor to continue considering them in his next appointments, saying the community such as Sidama, Somali should be included in the county's development agenda.

"Minority communities have for long been fighting to clinch elective positions but tribal voting trends have barred them from clinching the seats," she said

The county boss when naming the chief officer's nominees said he was carefully guided by the performance competence, regional balance and one-third gender rule.

He expressed confidence that his nominees will pass the vetting process to implement his development agenda to the people.

The names of the 24 county chief officers were forwarded to the county assembly speaker for vetting.

Post a comment
WATCH: The latest videos from the Star
by ABDIKADIR CHARI
North Eastern
21 January 2023 - 12:51
Read The E-Paper