Why environmentalists are worried about plastic waste in ocean

Plastics can take over 200 years to decompose 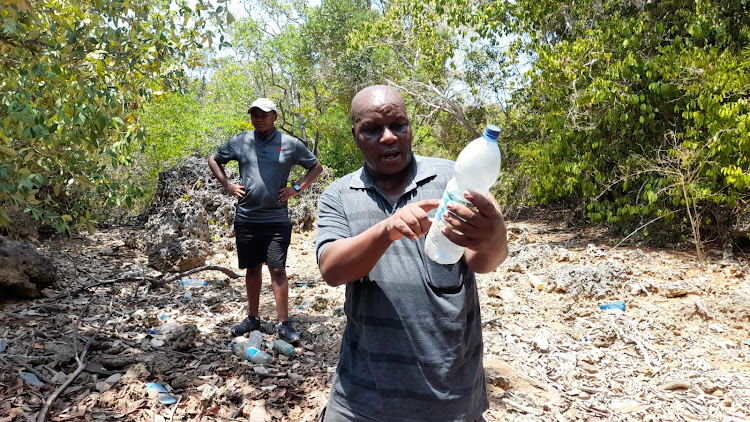 Environmentalists in the coastal region have raised concern over the increased improper disposal of plastic material into the Indian Ocean.

The plastics not only pollute the environment but are also a threat to marine life, said Innocent Ngao, a Mombasa-based environmentalist.

The Kenyan coastal line is currently littered with plastic bottles and every kind of dirt that is brought by visitors who come to enjoy the ocean breeze.

These people have failed to separate plastic wastes from other bio-degradable wastes during disposal, Ngao said.

“When plastic is thrown into the ocean, it does not degrade like the vegetable. It can be broken down into smaller pieces, but it can stay for over 200 years,” he said.

The Kenya coastline boasts pristine sandy white beaches from Diani in the south to Lamu in the north.

According to Ngao, the improper disposal of plastic is bad for an economy that depends on tourism.

He said Kenya banned single-use plastic products in 2017, but the problem of plastic pollution is still common along the shores.

According to United Nation statistics, at least 800 species worldwide are affected by marine debris, and 80 per cent of this debris is plastic.

When fish, sea turtles, and marine mammals ingest the plastics, it causes suffocation, starvation, and drowning of the animals.

Ngao said when plastic breaks into smaller parts, it keeps on being available in the food chain and the marine organisms might swallow them.

When human beings eat the same fish, they also ingest plastic, he said.

“The problem of plastic is bigger than what people usually put it, it comes to our bodies in other ways, which might cause health problems,” he said.

He said the most significant dangers of plastic pollution are the cancer cases which are now on the increase because people are taking in plastic unknowingly.

“Plastic is killing so many marine organisms. When they ingest it thinking that it is food, it coils around the intestines and in most cases kills them. Some are strangled by bigger plastics,” he said.

“Even though it does not decompose, it gets fragmented and animals in the marine gets affected,” Langat said.

Scientific investigations have shown there are some plastics which are micro-plastics from the food that we get from the sea, something which is very dangerous because we also have the plastics in our systems.”

The experts said the Kenyan Coast is dependent on tourists, who come to enjoy and see marine life, and if there are no marine animals, there will be no tourists coming to the marine parks

Study shows plastic takes up to hundreds of years to fully decompose and some of them break down much quicker into tiny particles which in turn end up in the seafood we eat.

Sea turtles that ingest just 14 pieces of plastics increase their risk of death and the young ones are at high risk because they are not selective about what they eat.

Kenya is among nations that strongly advocate for the conservation of the environment and even went ahead and banned the use of plastics in 2017.

Ngao said we cannot avoid having plastic because it is part of human lives, but we can find a way of living with it in a way that is not disposed of immediately, which means we make it stay in the ecosystem in a useful manner for longer.

“We call it circular economy, instead of using a bottle once and throwing it into the dumpsite, get it collected, keep it for another use or get it recycled for another purpose or get it broken down for a different product so that is not toasted away to the ocean,” Ngao said.

He said the solution is adapting the circular economy which can only be done if people’s behaviour is changed.

“People should learn how to separate their waste in the house, they should not mix all the waste which is taken to the dumpsite and becomes a problem to the ecosystem,” he said.

Langat said the plastic crisis is something that goes beyond the East Africa border and therefore there is a need of coming up with mechanisms that will help in curbing the menace.

“There should be a transboundary way of dealing with the menace, this can be achieved by coming up with mitigations to deal with the crisis in all East Africa countries where every country works with the placed laws because we have plastics from other countries that are found in our ocean,” he said.

Before 2017, about 100 million plastic bags were used in Kenyan supermarkets every year.
News
1 month ago