Celebrations in Kirinyaga as Karua is named Raila's deputy

•Residents who anxiously waited with bated breath for roughly five hours took to the streets in celebration after the appointment of Karua.

•In Mwea, residents thronged Wang'uru stadium to listen to Karua 's appreciation speech from a campaign van that had been mounted with huge speakers. 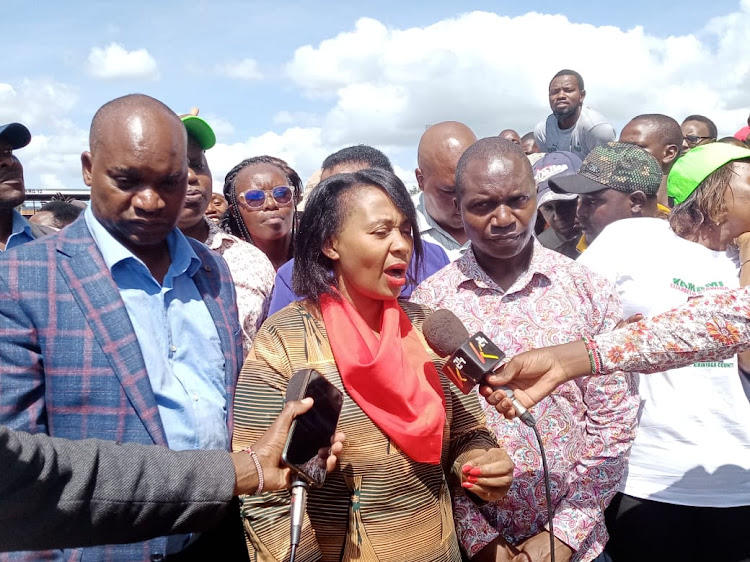 Residents who anxiously waited with bated breath for roughly five hours took to the streets to appreciate the appointment.

In Mwea, residents thronged Wang'uru stadium to listen to Karua 's acceptance speech from a campaign van that had huge speakers mounted on it.

Soon after the speech, the residents chanted Karua and burst into praise songs for the woman named the iron lady of Kenyan politics.

Ndambiri praised Raila for picking Karua as his running mate saying the political landscape in Mount Kenya has changed in his favour.

"I have been a proponent of the Raila -Karua government and what Raila has done will remain an unforgettable experience in the historical and political chapter of this nation."

"With her appointment, it shall be a big boost to Raila' s presidency as his support has overtly shot in Mt Kenya region."

He hailed Karua for her steadfastness, passion and vigour in the fight for justice and quest for a broader democratic space as he described her as a trailblazer worth to be emulated.

Area MP Kabinga Wachira lauded Raila for demonstrating his statesmanship by nominating a woman for the position of a potential deputy president.

Kabinga said Karua is the most suitable of them all due to her high level of accountability.

Kabinga noted that handing Karua the Justice and legal service docket will help stamp out corruption and blatant disregard for the rule of law.

"With her announcement, I'm sure there are those individuals who will have the sleepless nights from now to August because of their tainted images. We are proud Karua will streamline public service dispensation and seal all loopholes where public funds leak."

In addition, he said that they look forward to intensifying the Azimio la Umoja campaigns throughout Kirinyaga county in the run-up to August polls.

"What we were doing before today were just press-ups, moving forward our political campaigns and structure will change, we shall visit every village canvassing votes for the Azimio team. We have to restore the lost glory.

"Kabinga also hailed president Uhuru Kenyatta for having a soft spot for a Karua leadership and overseeing her appointment at the national high table."We are proud that as President Kenyatta proceeds for retirement, Mount Kenya will be left under a safe pair of hands. We believe Martha is the next Mt Kenya supremo ."

Rose Wachira said it would be a great privilege to serve Karua as her woman representative.

She congratulated Karua for clinching the position adding that her presence at the national making table is a great milestone for the women's leadership.

Ordinary Kenyans were equally beaming with excitement over the Karua appointment Antony Muriithi a resident at Mwea praised Karua for her outstanding and untainted leadership.

He said Karua will help overhaul different public sectors for the betterment of Kenya.

Everlyn Mumbi another local said Karua will not only help put Kirinyaga on the map but will help propel responsible leadership.

In Gichugu which is Karua's home constituency, locals could not hide their excitement.

Njagi Makanga, a local leader acknowledged the respect that has been accorded to Gichugu through Karua's appointment.

"It's an honour to have a leader of such calibre in such a position. It is a defining moment in the history of Kenya that will remain unforgettable."

Emily Wanja, another local said Karua is up to the task due to her firmness, charisma and unbowed character.

Karua will also be the Justice and Constitutional Affairs minister
News
1 month ago
by WANGECHI WANG'ONDU
Central
16 May 2022 - 18:03