Karua expressed commitment to working with Raila in delivering a prosperous Kenya.

•In her acceptance speech, Karua welcomed the appointment noting the move is a big win for the women of Kenya. 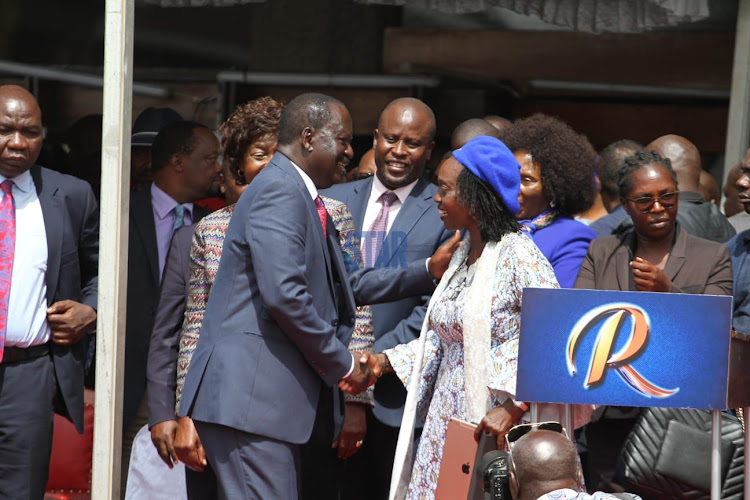 ODM leader Raila Odinga shakes hands with Martha Karua after naming her his running mate in the August polls on Monday, May 16, 2022.
Image: ENOS TECHE

The August 9, election is a moment for women of Kenya to take charge of the leadership of the country, Narc Kenya leader Martha Karua has said.

In her acceptance speech, Karua welcomed the appointment noting the move is a big win for the women of Kenya.

"This is a moment for the women of Kenya. It is a moment my Late friend Wangari Maathai would have been proud of. This is the moment to usher more of us into the  national and county leadership."

The Narc Kenya leader went further and expressed her gratitude for being nominated as running mate.

She expressed commitment to working with Raila in delivering a prosperous Kenya.

"I am deeply honoured by the decision to be nominated as the deputy presidential candidate. It is a personal journey but also a national journey. Today, I recommit myself to fully support his Excellency Raila in his eternal pursuit of social justice and dignity for all."

"It is only Azimio that can take the people of Kenya forward. We urge you to come and work with us."

While appointing Karua, Raila described her as na exceptional leader with high principles.

"History is calling us to close the gender gap. As Azimio we have today taken a key step towards that end.," Raila said.

The appointment of Karua marked the end of anxiety and speculations that had mounted on who Raila was to appoint as deputy.

The names were submitted in order of priority.

Kalonzo has however turned down the chief cabinet secretary's offer and announced his exit from the Azimio coalition.

He says he will run as a president on a Wiper party ticket. He unveiled Andrew Leteipa Sunkuli as his running mate.