Members of Kutus Muslim Community Self Help group have started earning from the chicks distributed by Kirinyaga Governor Anne Waiguru.

Five months ago, the governor distributed chicks to various community groups across the county for egg and meat production.

The hens have started laying eggs while the cocks have also matured and the group is now capitalising on the high demand for chicken during this festive season.

The group chairman, Yaheh Juma, said the project was a timely intervention by the county government and will go a long way in economically empowering the group members.

The group has also separated layers and will be using some of the eggs to hatch some more chicks in order to restock their brood.

Juma said they deposit all the money from sales into the group’s savings accounts with the aim of accumulating it and creating a capital base for each member to initiate their own projects.

He added that the profit is what will be divided among the members.

Since inception, the group has been receiving free chicken feeds as well as the required technical support from the county government.

The group chairman said the project will help eradicate poverty among the Muslim community.

“The project has received a lot of admiration from the entire community and many of them are now realising it is possible to have a viable agricultural activity within our settlement,” he said.

The chairman said at the moment they are using group members’ contribution to take care of the project requirements such as paying for a farmhand.

Juma encouraged other community members to embrace such projects since they do not require large parcels of land.

Amina Wairimu, a group member said she has learnt a lot about poultry keeping and she has constructed her own chicken coop in readiness for a project like that.

She said they are out to challenge the notion that Muslims cannot undertake such projects.

Wairimu said that the project has enhanced cohesion of their self-help group members as well as togetherness of the community.

It has also empowered women who did not have any income generating activities.

The group is one of the 473 community groups that have been funded by the county government.

Governor Waiguru said the funded projects are part of Wezesha Kirinyaga programme which is aimed at making agricultural activities translate to better incomes and improved livelihoods for residents.

She said the projects will help diversify agricultural activities and reduce over-dependence on traditional cash crops whose prices are unreliable. 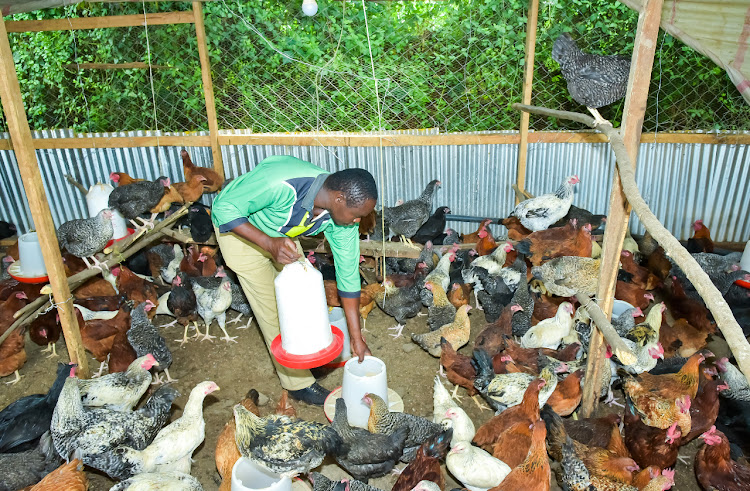 32 groups produce about a million eggs each month under a programme supoorted by the county government and World Bank
Counties
1 year ago
by WANGECHI WANG'ONDU
Central
27 December 2021 - 22:00