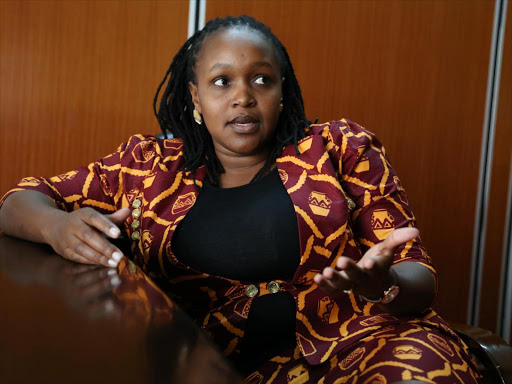 Nominated senator Martha Wangari at her office during an interview Jul 22 2014.Photo/HEZRON NJOROGE

Employees of two flower farms in Nakuru County have petition senate over what they have alleged poor remuneration, sexual harassment and handling of harmful chemicals.

In the petition presented in the senate by nominated senator Martha Wangari, the petitioners have accused Homegrown Flamingo Holdings Flower Farm and Aquilla Flower Farm of deplorable labour and social welfare conditions, misapplication of the occupational safety and health Act and related labour laws .

“Sexual harassment against female employees is rife. This is especially so when a female employee has spent few days or weeks away from work due to personal or health problems and wants to re-continue with the contract,” reads the petition.

The petitioners, who have asked senate to conceal their names for fear of being victimized, say contrary to a policy where greenhouses should remain sealed for 30 days after each chemical spray, the two farms in Naivasha sub-county have been violating the provision.

“The employers have been forcing employees to enter such greenhouses before the 30 days are over to do pruning work, or spraying work. This happens all the time and constitutes over 50 per cent of causalities in the flower sector,” they said.

They have also accused the floor firms of “crafting a way of escaping responsibility by issuing one month contracts”.

They say through the one month contracts, the farms will avoid awarding the employees benefits such as house allowances.

They say the farms only provide gratuity to an employee with more than five years contract and who has served for a minimum of five years.

“We pray to the senate to urgently investigate the matters raised and prepare a report on the labour and social welfare concerns of the employees in the flower farms,” they told the senate.

Senate’s Labour and Social Welfare committee chaired by Kilifi senator Stewart Madzayo has 60 days to investigate and table the report in the House.

Flower firms , mainly based in Naivasha have for a long time been accused

and abusing their workers as they seek to maximise profits. Kenya is the third largest exporter of cut flowers in the world, accounting for around 35 per cent of all sales in the European Union. Kenya's roses, carnations and summer flowers are also popular in Russia and the U.S. The value of horticulture exports from Kenya in 2015 was Sh100.9 billion, the Economic survey 2016 shows.