Kenya to benefit from health, IT, in Japan partnerships

•The MoUs address sectors including finance, energy and healthcare.

•The renewed partnership comes as Kenya's is building its manufacturing capacity  to industrialise and increase its exports. 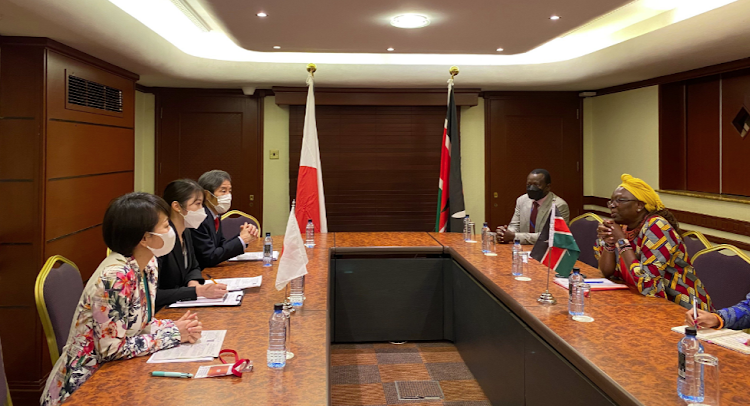 Kenya has signed at least 12 MoUs with Japan in finance, energy, health care and other fields.

On Tuesday, public and private sector firms from Japan signed more than 15 MoUs with Kenyan firms and state organisations in Africa, 12 of which directly affect Kenya.

The Kenya MoUs were signed  to consolidate cooperation and collaboration between the public and private sectors in both Japan and Africa.

The renewed partnership comes as Kenya's is trying to build its manufacturing capacity, industrialise and increase exports  of agricultural exports t o Asia.

Japan has been instrumental in the development of Africa.

It has enhanced the role of regional integration through the Regional Economic Communities to Expand industrialisation, trade and investments.

" The conclusion and signing of 15 MoUs between the public and private sectors of African nations and Japan indicate deepening partnerships between Japan and the continent," CS Maina said.

The Mou signed includes an agreement between the Kenya Association of Manufacturers and Japan's Association of Overseas Technical Cooperation and Sustainable (AOTS) partnership in which Kenya  gains technical resources from Japan.

Kam vice chairman Rajan Shah said,"Through this alliance, we can  get knowledge and skills transfer so we are more efficient in our manufacturing sector."

He said as part of the partnership with Japan firm AOTS, manufacturers in Kenya will  be introduced to a new system of machinery analysis of data, which has been lacking over the years.

There is also an MOu between the Kenyan Ministry of Health and the Japan's Health ministry of labour and Welfare to promote bilateral cooperation in health.

There is also a joint initiative on the vehicle KD project in Kenya between Japan's Toyota Tsusho Corporation and Kenya's Association Vehicle Assemblers Limited (AVA).

Uhuru discussed peace, and security in the Horn of Africa among other matters.
News
10 months ago
WATCH: The biggest news in African Business
Post a comment
WATCH: The latest videos from the Star
by SHARON MAOMBO Business Writer
Kenya
04 May 2022 - 04:00
Read The E-Paper