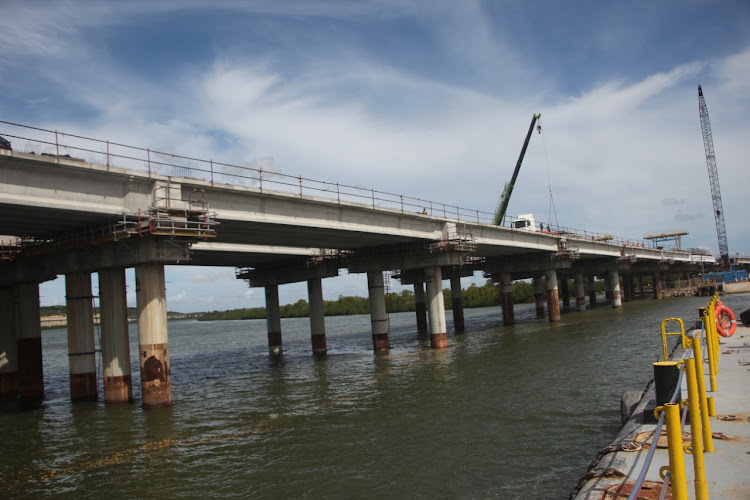 INFRASTRUCTURE DEVELOPMENT The 690-metre long Tsunza bridge which is part of the Phase II of the Dongo Kundu bypass
Image: ONYANGO OCHIENG

The construction of the Sh4.89 billion Mwache Junction-Tsunza-Mteza road is 53.9 per cent done.

It is also part of the Sh24.2 billion Mwache- Tsunza- Mteza road, which will connect Mombasa and Kwale counties

The Dongo Kundu bypass is a three-phased project that will connect west of Mombasa from Miritini to Kibundani along the Likoni-Lunga Lunga road in the South.

Phase I of the project was completed at the cost of Sh11 billion.

Phase III of the project is from Mteza bridge to Kibundani at the South Coast.

The project is part of the Mombasa Port Area Road Development Project being undertaken by the Kenyan government, through funding from the Japan International Corporation Agency.

Kenya funds 20 per cent of the project while 80 percent is being funded by Jica, through conventional loans and grants.

On Tuesday, the deputy project coordinator Eustace Mutea said phase II of the project is going to connect the west mainland to the south coast through Tsunza.

It will open all the hinterland in Kwale county while reducing traffic at the Likoni crossing channel, he said.

“This road will ease traffic at the ferry and will connect Mombasa with Kwale. It will also make a good access to the coast and Tanzania that we expect will have a significant impact on trade along the south,” Mutea said.

He was speaking to the press at the Tsunza Bridge site.

The phase II of the road, which measures 8.96km, will consist of a dual carriageway starting from the Mwache interchange.

It runs in a southerly direction from the interchange for four kilometres, crossing the Mwache creek and going through Tsunza peninsula before turning eastwards across the Mteza Creek.

The road will involve the construction of an interchange at the Likoni-Lunga Lunga highway and the erection of three bridges, one at Mwache spanning 660 metres.

The other two bridges will be Tsunza Viaduct (690m) and the Mteza Bridge, which is expected to be the longest bridge over water in the country and region straddling 1,440 metres.

The contract was awarded to the Fujita Corporation-Mitsubishi Corporation consortium on February 20, 2019, with the signing taking place on April 18, 2019.

“We believe by the time this project is finished from Miritini to Kibundani, which is 20km, people will be able to clear the stretch within 15 minutes. The commerce and the social impact for this road will be tremendous,” Mutea said.

He further said the area was almost landlocked with the journey from Tsunza to Mazeras almost taking the whole day.

“Before the road, an area like Tsunza was almost landlocked. It would be a day’s journey from Tsunza to Mazeras, but now it’s only 30 minutes,” he said.

The new connecting road is expected to provide a very seamless alternative for people going to the South Coast and who do not want to pass through Mombasa town.

People can use the Dongo Kundu road to Mazeras without having to go around 40km through Mombasa town.

“It will provide direct access to or from the Moi International Airport, Mombasa, and the SGR Miritini terminus to the south coast hence improving tourism and hospitality in the region,” he said.

Mutea said more than Sh1.6 billion was spent on compensation in phase 1 of the project, but in phase two, they avoided the relocation of people and instead provided funds for the acquisition of land, especially the Tsunza village.

About 1,500 homesteads will be affected by the project.

“Despite all the challenges, the contractor is on time to complete the project,” he said.

The government is also expected to undertake the Mombasa Gateway Bridge at a cost of Sh85 billion.

The 1.4km Mombasa Gateway Bridge will connect Mombasa Island with South Coast substituting the 84-year-old ferry service that suffers perennial breakdowns that delays traffic flow to and from Mombasa.

The project was expected to begin in June this year and is likely to end by June 2024, according to the Mombasa Gate Bridge City Master plan.

The national government has invested in excess of Sh3.6 trillion infrastructural projects at the Coast
Counties
6 months ago

The President has invested in excess of Sh3.6 trillion on infrastructure in the region since 2013
Counties
10 months ago
“WATCH: The latest videos from the Star”
by ONYANGO OCHIENG
News
27 April 2022 - 23:00