•The government has suspended all international passenger flights in a move aimed at reducing the spread of Covid-19.

•CEO Allan Kilavuka says 50 per cent of the airline's aircraft will be placed on long term storage while the rest will undergo maintenance. 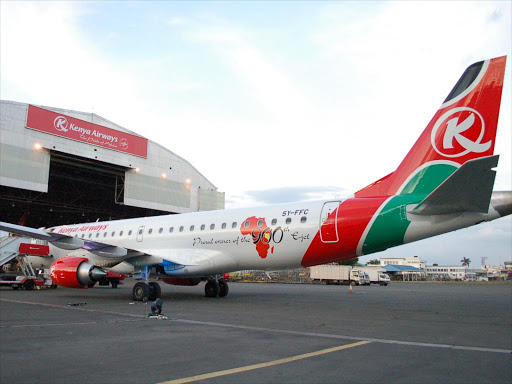 The rear of a Kenya Airways Embraer plane at the airline's JKIA hanger./file

Kenya Airways has grounded most of its aircraft following the suspension of international flights which comes into effect on Wednesday night as the country battles the spread of the coronavirus.

CEO Allan Kilavuka said in a statement that only cargo flights will remain operational.

The government has issued a ban on all international flights effective Wednesday night.
News
1 year ago

This is in line with Health CS Mutahi Kagwe's Sunday pronouncement suspending all international flights as eight new cases of Covid-19 were reported, pushing the total number of positive cases to 15 (as of Sunday evening).

KQ, as it is known by its international code, will ground about 90 per cent of its fleet this week.

It has a total of 36 aircraft which includes nine Boeing 787 Dreamliners, 10-Boeing 737 aircraft, and 17 Embraers.

At least 30 planes will remain non-operational with the remaining six serving domestic routes and cargo haulage, persons familiar with operations told the Star.

“We will continue to operate cargo flights, particularly so that we are available to offer emergency services or much-needed supplies. In the meantime, our domestic flights to Mombasa and Kisumu remain operational,” Kilavuka said in his statement.

The domestic market is mainly served by the smaller Embraer aircraft while the airline operates two-Boeing 737-300 aircraft for cargo haulage.

“Yes, we have started grounding,” a senior officer at the airline told the Star.

The suspension of international flights comes barely four days after last Friday's announcement by Kilavuka that the airline would suspend its operations as a result of travel restrictions by other countries.

KQ was forced to reduce flights by approximately 65 per cent.

More than nine countries in its Africa network, the UAE and India have put travel restrictions in the past week, hitting the airline's operations and its revenues.

“Consequently, we will have to place 50 per cent of our aircraft on long term storage while the rest will undergo maintenance,” Kilavuka said.

In February, the loss-making carrier received a Sh5 billion loan from the government to facilitate the engine overhauls of its E190 Embraer fleet.

Chairman Michael Joseph said the loan on commercial terms from the National Treasury would cater for the overhaul of 11 Embraer engines.

Suspension of international flights now leaves more than 3,000 employees of the group at crossroads.

These include more than 400 pilots and in excess of 360 cabin crew who have been flying the airline's planes daily to 55 destinations worldwide, 41 of which are in Africa, carrying over four million passengers annually.

Management has since announced a raft of measures including unpaid leave for some of its staff effective April 1. Senior managers will be subjected to a 75 per cent pay cut with the CEO taking an 80 per cent pay cut.

He said the management will e subjected to a 75% pay cut and he will get an 80% pay cut.
News
1 year ago

While coronavirus effects are being felt by the entire global aviation industry, KQ is hanging on the balance as it remains in been making losses for more than four years.

It reported a Sh8.6 billion loss for the six months to June 30, 2019 sinking deeper in the red from a Sh4billion loss reported in a similar period in 2018.

The African Airlines Association (AFRAA) has since urged African governments to consider the compensation of inevitable losses, the alleviation of exogenous operating costs and the subsidization of the African airlines.

According to AFRAA, demand for air travel has been negatively affected by the COVID-19 outbreak, which has resulted in airlines making losses due to substantial schedule changes, travel restrictions, and cancellations.