INSECURITY IN THE RIFT

MUGWANG'A: Bandit 'sport' has become a life too costly, stop it now!

We need to stop banditry and its twin cattle rustling now. We can't afford to loose another life to these terrorists!

• Bandits and rustlers are killing Kenyans in their hundreds, stealing livestock and other property, and destroying infrastructure with abandon.

• Several people, including children, died in a bandit attack in the Kerio Valley. On January 1, several animals were stolen. 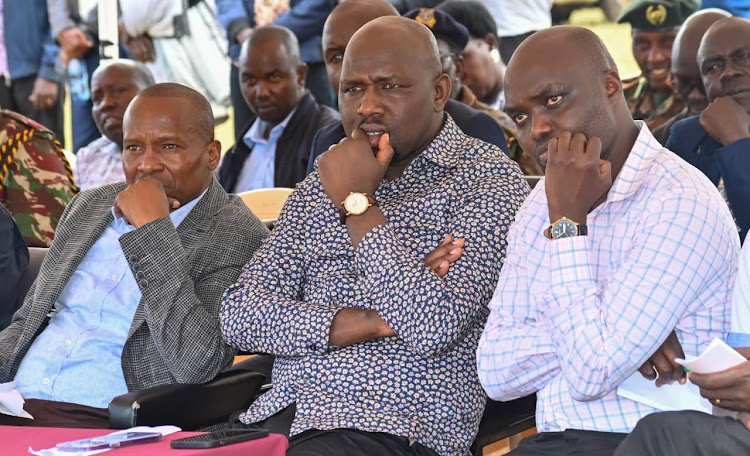 WON'T GIVE IN: CS for Interior Kithure Kindiki with CS for for Roads Kipchumba Murkomen and Governor for Elgeyo Marakwet Wisley Rotich during a peace meeting in Kerio Valley on January 3
Image: MATHEWS NDANYI

A rather absurd joke attributed to a former Cabinet minister in reaction to an attempt by then MP for Ikolomani Boni Khalwale to introduce a motion to deter bandits and cattle rustlers has come back to haunt Kenyans.

In a tweet on January 1, Senator Khalwale said in 2006, he moved a bill classifying cattle rustling as a capital offense punishable by death/life imprisonment. Rift Valley MPs marshalled numbers and defeated the bill, with the said minister warning him to keep away from their sport.

Banditry and cattle rustling is the hottest topic in conventional and social media. Not because we have won the trophy in the sport but the bandits and rustlers are killing Kenyans in their hundreds, stealing livestock and other property, and destroying infrastructure with abandon.

Several people, including children, died in a bandit attack in the Kerio Valley. On January 1, several animals were stolen.

It's good news to Senator Khalwale and other like-minded people that the Rift Valley leadership, including President William Ruto, is keen on ending the menace, albeit several lives too late.

They, like the Khalwale of 2006, want the law amended to include cattle rustling and banditry, which are responsible for the deaths of hundreds of people at the hands of gun-toting criminals in Elgeyo Marakwet, Baringo, West Pokot, Turkana, Samburu and Laikipia counties, classified as acts of terrorism, with those convicted sentenced to death or life imprisonment.

But just what is this phenomenon called banditry and how did it get here?

Banditry is often used to refer to a range of criminal activities, including armed robbery, cattle rustling, and other forms of theft in rural areas. These crimes are carried out by armed individuals who operate outside the law and target vulnerable communities such as herders, farmers and small business owners.

Banditry, sources further say, can also be defined as political-related activities, where they extort money and goods from local businesses and individuals. These are carried out by the criminal gangs connected to politicians. .

It can be difficult to distinguish banditry from other forms of crime, as these groups often engage in a variety of different illegalities, and their motivations may be complex and multifaceted.

In both cases, banditry often results in violence and displacement of people, property loss and economic damage. It is considered as one of the major challenges for Kenya law enforcement.

Banditry has a long history in Kenya and dates back to the colonial era, when British settlers seized land from local communities and forced them to work on farms and in mines. As a result, many Kenyans turned to banditry as a means of survival, using the proceeds from their thefts to support themselves and their families.

During the post-colonial period, banditry continued to be a major problem, as the country struggled to establish stability and development. In the 1970s-80s, the government began implementing policies to combat banditry, including increased law enforcement and rural development.

Despite these efforts, banditry remained prevalent in many parts of the country, particularly in arid and semi-arid regions, where poverty and unemployment were high.

Many reasons and factors have been floated to explain the vice.

Among the factors advanced are historical and ethnic tensions, land disputes, political interference, poverty and unemployment, lack of governance and security, political instability and climate change.

Also cited are environmental degradation, economic inequality, immigration, pastoralism, general national insecurity, police brutality and corruption, which lead to a breakdown in law and order, and the failure to provide basic services.

In most parts of the Rift Valley, however, banditry is often condoned and viewed as a tradition and part of the people's culture. The practice is passed down from one generation to the next, making it difficult to combat. Coupled with this, is the lack of education, which makes it difficult for individuals to find legitimate employment and make a living.

Leaders from Turkana have also attributed the sustained bandit attacks along the border with West Pokot and Baringo counties to 'untouchable financiers and inciters.’

But in trying to find reasons why banditry is precipitated we, as a society, should endovour not to justify its existence. The damage it leaves in its wake is massive and can kill the country.

Other than the obvious loss of lives, several negative effects follow.

For instance, the threat of banditry causes fear and insecurity among residents, leading to a sense of unease and a loss of trust in the ability of law enforcement to protect them.

Banditry also has significant economic costs, as businesses may close or relocate due to the threat of violence, and property values may decrease in the affected areas. The dent banditry on the image of country internationally is also massive as it is seen as a sign of instability and insecurity which could discourage foreign investment and tourism.

We have only one thing to do and I am happy President Ruto is taking the bull by its horns: We need to stop banditry and its twin cattle rustling now. We can't afford to loose another life to these terrorists!

I've confidence in police to eradicate banditry - Ruto to APs

Ruto said the police reservists will work with the security officers in the area.
News
1 month ago

Ruto: Why we'll not use KDF to fight banditry

Says the banditry situation is bad but has not reached the point to involve KDF.
News
1 month ago

Ruto said the facilities will be set up in Turkana, Suguta valley and Kerio Valley.
News
1 month ago
Post a comment
WATCH: The latest videos from the Star
by MICHAEL MUGWANG'A
Siasa
15 January 2023 - 08:01
Read The E-Paper