The President's ultimate declaration on endorsement will give Mt Kenya direction 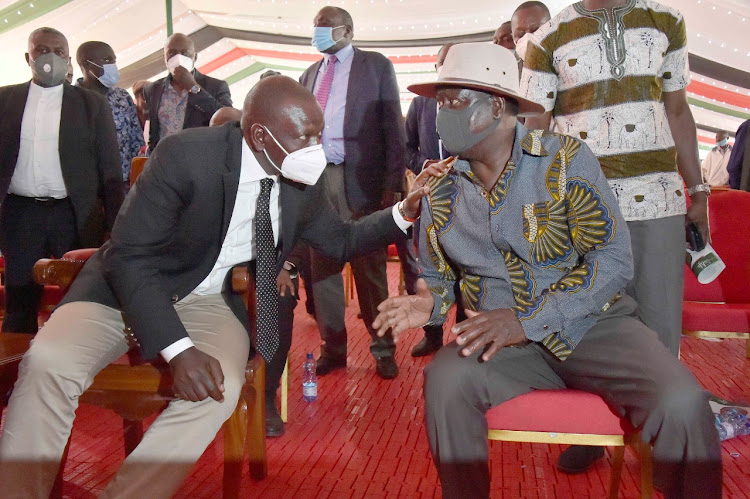 The duo's scramble for the heart and soul of the region with more than eight million registered voters is expected to become a nasty showdown ahead of 2022.

The Building Bridges Initiative campaigns to amend the Constitution are the next phase of the Raila-Ruto fight for Central Kenya.

The DP has been lukewarm in his support for the BBI, while pushing for elusive consensus on key contested issues in the Bill. Raila has pledged to crush Ruto at the ballot if he finally decides to lead the BBI 'No' campaign.

The former Prime Minister has burnished his credentials in Mt Kenya — which would get added representation under BBI, for which he campaigns vigorously.

The President's key allies in Mt Kenya are working closely with Raila, dealing Ruto's claim to the region a blow 19 months to the polls.

The DP initially was strongly opposed to BBI, then said he sought consensus, but it's too late now to make the scaled-back changes he sought.

Some argue the DP's apparent resistance to BBI, which also proposes expanding the Executive, might work against him as some Mt Kenya leaders are eyeing those posts after Uhuru exits.

Mt Kenya would likely lose out after Uhuru but the proposed BBI amendments could give its leaders top Executive positions in the expanded government.

Senate Majority Whip and Murang'a Senator Irungu Kang'ata told the Star  while the region is expected to witness high-octane politics, the President will be the guiding light.

Kang'ata said Mt Kenya is cognisant of the fact that it will play a pivotal role in determining the country's political direction because of its great numerical strength.

“Definitely the President will provide the direction ahead of 2022. All leaders eyeing the region's votes will come through the President," Kang'ata said.

He went on, “President Uhuru is the region's de facto leader and when the time comes, he will demonstrate exactly that."

Kenyatta's final word on his successor is likely to determine who — between his erstwhile ally-turned-foe Ruto or Raila —  inherits his backyard. But he and Ruto are alienated.

Ruto and Raila, the perceived presidential frontrunners, have intensified their Mt Kenya offensives.

Initially seen as the heir apparent, Ruto is walking a tightrope following Uhuru's rapprochement with Raila in the March 8, 2018 handshake.

The handshake is considered Uhuru's masterstroke to steady his government and provide the much-needed stable political climate to actualise his legacy.

On Thursday, ODM national treasurer Timothy Bosire, a key Raila ally, said the handshake alone has been responsible for the paradigm shift in governance and the conduct of politics.

“The political stability the country is enjoying has given the President the necessary goodwill and climate to propel his Big Four agenda and unify the country," the ex-Kitutu Masaba MP said.

Bosire said the BBI process backed by the President and Raila offers a unique opportunity to correct wrongs and set it on the path to become an economic tiger.

“The BBI is the magic that will solve the country's problems by ensuring  proper accountability and management of public resources, fighting corruption and entrenching good governance,” he said.

Many of the DP's allies in Central Kenya have slowed their activities for fear the President will unleash the state machinery against them and ruin their reelection chances.

Only a few of the DP's key loyalists from the President's turf have remained defiant and continued to market Ruto.

The fear of victimisation by state agencies, coupled with the fast-changing  dynamics of the BBI process, has set back the hustler nation in Mt Kenya.

“There have been sustained efforts to unfairly target leaders who support the Deputy President in Mt Kenya but we will stay the course because the future is bright for us,” Mathira MP Rigathi Gachagua said.

He said the DP enjoys massive support in Mt Kenya because of his track record and his fight for ordinary people.

“The Gaturi ward by-election in Murang'a tells you the ground is shifting," Rigathi said.

In Naivasha’s Lakeview ward, Simon Wanyoike of the New Democratic Party got 1,451 votes against Jubilee’s George Njoroge who managed 983.

Once demonised as an enemy of the Kikuyu community, Raila is being marketed as the region's best bet in 2022.

Political analysts and some Mt Kenya politicians say Uhuru's endorsement of a successor will determine the region's direction.

“The President is the king of Mt Kenya and all of us will follow his direction when the time comes," Kiambu Woman Representative Gathoni Wamuchomba said.

Wamuchomba said the President allowed some political democracy in Central because he is a "real democrat" but he will whip the region before 2022.

“The few Tangatanga elements know very well that when the President strikes, all of us will have to follow him," she said.

Ruto had been seen as the region's 2022 favourite and Uhuru's automatic heir before the handshake that gave birth to BBI.

The DP has maintained the handshake was never meant to propel far-reaching legal reforms and BBI's proposed constitutional amendments.

Ruto's resistant and lukewarm BBI stand has diminished his chances of succeeding Uhuru.

National Assembly Deputy Majority Whip Maoka Maore said as the country gears up for the BBI referendum, the DP will be deserted in Mt Kenya and most of his allies will flock to the President's choice.

“The reality is some politicians had tried to undermine the President and his resolve to chart the community's course,"Maore said.

The President is said to be planning major tours across Mt Kenya to campaign for BBI, an onslaught that will further hurt the DP.

The President will be accompanied by BBI proponents including Raila, a move analysts say will indicate Uhuru's preferred successor.

Last week Kamanda hosted Raila and Mt Kenya heavyweights at his rural Ole Kalau home as part of the plan to market Raila.

Uhuru's allies have indicated Mt Kenya is warming up to Raila, signalling it is ready to repay the longstanding debt owed to the Jaramogi Oginga Odinga family.

Nyeri Senator Ephraim Maina told the Star, "We don't want to pay debts from a few years ago. We want to go back into history and pay the debts outstanding for many years,” Maina said.

“Even when you go to a bank for a loan, you can't get a new loan before clearing the old one,” the senator said.