Having numbers in Parliament can be used to scare your competitors.

• That a handshake can effectively kill a political juggernaut like the Jubilee Party. 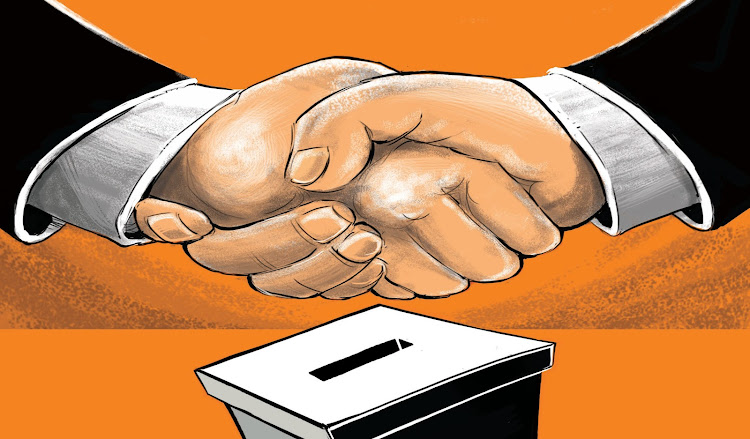 It’s been two years since President Uhuru Kenyatta and Raila Odinga shook hands in a move meant to reconcile the country after bitterly fought general and repeat presidential elections.

In August 2017, President Kenyatta was declared the winner with more than  8.2 million votes against his main rival Raila, who garnered 6.7 million votes. However, in a landmark ruling, the Supreme Court ruled 4-2 that the presidential election was marred by irregularities and illegalities and therefore should be nullified.

What followed was high drama that saw a new election date set for October 26 globally. Curiously, Raila withdrew from the race, a few days to the repeat polls and Uhuru went ahead to win the elections against other ‘also run’ candidates.

Despite his withdrawal, Raila still came a distant second as his name still appeared on the ballot. Uhuru went ahead to be sworn-in for his second term as president on November 28.

Raila also swore himself in as ‘The People’s president’ under the supervision of Miguna Miguna, his ally-turned-foe-turned-ally-turned foe. What followed were heightened protests in what came to be known as resist and Machozi Friday. The country was in a political crisis and the protests were hurting business.

The Kenya Revenue Authority failed to meet its targets by over Sh80 billion in the ensuing period and it was estimated the political crisis cost the country a conservative estimate of Sh600 billion worth of business between August 2017 and March 2018.

Parliament, on the other hand, couldn’t transact properly since MPs drawn from Nasa would only make a technical appearance in the chambers and stage a walkout. Kenya had a President whose legitimacy had been put into serious doubt on one hand, and a leader of the opposition whose claim to the presidency had no real power to govern, as his Nasa allies allegedly negotiated a post-election coalition with Jubilee.

It, therefore, came as a surprise when on March 9, 2018, Uhuru and Raila appeared from Harambee House and shook hands before a bewildered nation. It is alleged that none of the political handlers of the two gentlemen, including Deputy President William Ruto, was aware of these talks. Even Ruto watched it on TV just like any other Kenyan.

I remember as this unfolded, I was leading a delegation of human rights advocates on albinism to the Pan African Parliament in Midrand, South Africa. One of my friends from Tanzania, Jehoshaphat Njau, is the one who alerted me about these developments, congratulating me on behalf of Kenya for the progress made by the two leaders who are well known to me, having served in both of their political parties.

A lot of water has passed under the bridge since then, including what has now come to be known as the Building Bridges Initiative. Several rallies into the fray, Raila seems to have displaced Ruto from the inner circles of the presidency.

This was epitomised by his recent complaints against his own government concerning the killing of his Harambee Annex office security guard Kipyegon Kenei concerning the Sh39 billion fake arms deal scandal.

What followed were Wednesday’s press conferences of 70 pro-handshake legislators calling for Ruto's impeachment. A counter pro-Ruto group of 100 legislators also assembled to defend him, calling for the dissolution of Parliament and for Kenyans to return to the polls to back him. This scenario is indicative of a mid-term crisis that always characterises government in many jurisdictions and it happened again during the Grand Coalition Government. Political brinkmanship is at its best as the majority of legislators would shudder to countenance an election. What with their pecuniary obligations such as mortgages, car loans etc and the ever high turn-over that would see most of them losing.

What the handshake has taught us in the last two years is that there nothing like a government without political divide within a democratic context. Also, that positional non-constitutional power can be displaced and made irrelevant through quasi-constitutional political arrangements. That a handshake can build bridges by using the materials from another breaking one and that having numbers in Parliament can be used to scare your competitors. A handshake can effectively kill a political juggernaut like the Jubilee Party and the opposition can be the real government, while a deputy president can take up the role of official opposition while still in government.

Kenya is indeed a wonderful place to be in the spirit of BBI.