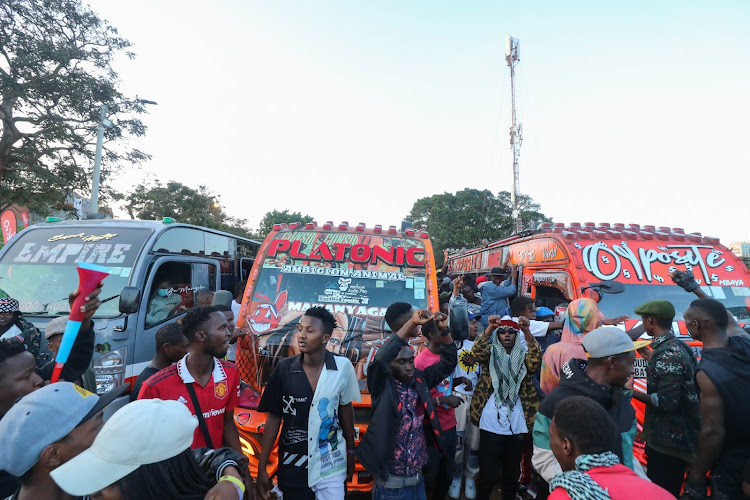 Fans cheer on their different matatus at the Ma3 Gala Awards held at the first annual Nairobi Festival in Uhuru Park on December 18, 2022.
Image: WILFRED NYANGARESI

Opposite matatu alongside its crew on Sunday dominated the Ma3 Gala Awards held at the Nairobi Festival in Uhuru Park.

The matatu, which plies the Umoja route under Umoinner Sacco and its team bagged the ultimate award for Kenya 1 of the Year 2022.

The awards were part of the first annual week-long festival that the Nairobi City County government held under Governor Sakaja.

The festival, themed “Vibe of the City”, was officially launched on Jamhuri Day by Governor Sakaja and aimed to appreciate the city’s diverse food, culture and art.

Opposite also won the Fan Favourite Crew of the Year award and the Best Fabricated Matatu of the Year.

The Jamhuri One award was presented to the Aftermath matatu (Embakasi).

Zitran, which plies under Wamasaa Invest Sacco, was conferred with the Riko of the Year award.

DJ Grauchi won the Most Played DJ award as Njaramba Lights won the Best Light Installer of the Year award.

Super Metro won the Most Preferred PSV Operator of the Year award.

This was the first annual Nairobi Festival to be launched aimed at appreciating the city's diverse food, culture and art.
InPictures
1 month ago

He said there will be an amazing fireworks display after the match.
News
1 month ago

Kenyans wishing to attend festival will be required to pay Sh100 per day.
InPictures
1 month ago
Post a comment
WATCH: The latest videos from the Star
by MELINDA KIRWA
Entertainment
21 December 2022 - 06:00
Read The E-Paper