The announcement of results for governor seats started on Thursday, August 11.

•Of the 47 Counties, only 45 participated in the elections for all six elective seats.

•Mombasa and Kakamega counties, however, did not take part in the gubernatorial elections. 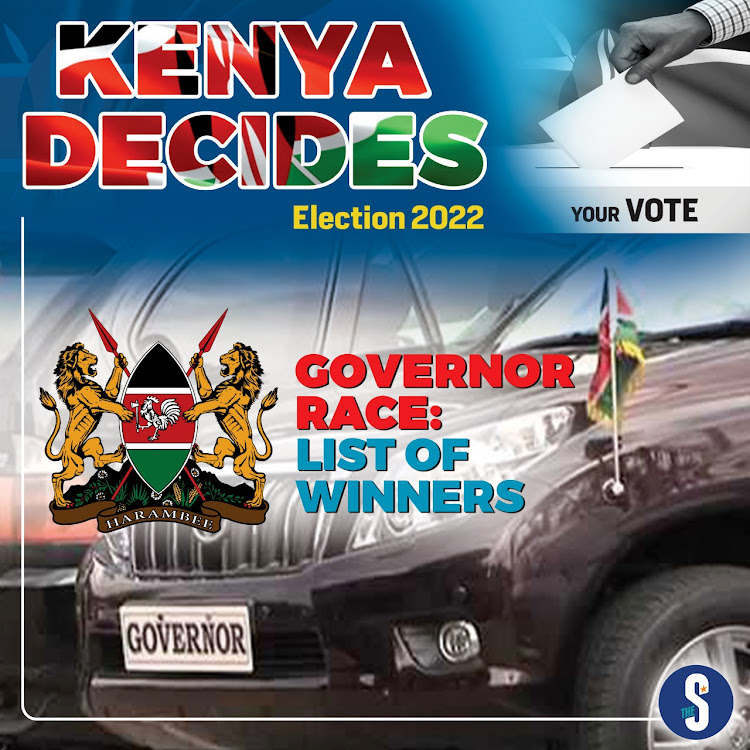 Kenyans across the country cast their votes for various elective seats on Tuesday, August 9.

The voting ended peacefully and by the time of going to press, results for Members of the National Assembly and those of the county assembly had been announced.

Of the 47 Counties, only 45 participated in the elections for all six elective seats.

Mombasa and Kakamega counties, however, did not take part in the gubernatorial elections.

IEBC Chair Wafula Chebukati suspended the exercise after a mix-up in the ballot paper printing.

He said the ballot papers for the areas had the wrong images and details of the candidates.

After the completion of the voting exercise on Tuesday, the announcement of results for governor seats started on Thursday, August 11.

Here are some of the results received by the Star.

His competitor Chris Wamalwa of Ford Kenya came in second with 79,020 votes.

Jubilee party 's Abdi Hassan Guyo has won the seat after he got 28,946 votes.

He beat his main rival Godana Doyo who got 2,551 votes under an Independent ticket.

Stephen Sang has retained his seat after garnering 237,045 votes.

The UDA candidate beat his opponent former Governor Cleophas Lagat who got 54,375 votes.

Governor Joseph Ole Lenku has been re-elected on an ODM party ticket. to get 117,600 votes against his closest competitor Katoo Ole Metito of the UDA party who garnered  111,725 votes.

ODM party retained the seat through Paul Otuoma who got 164,478. ANC candidate John Sakwa came in with 92,144 votes.

UDM's Mohamud Ali has successfully retained his seat after a race, after getting  38,803 votes to defeat his closest KANU candidate and former North-Horr MP Francis Chachu Ganya who got 28,279 votes.

UDA's Ann Waiguru has been re-elected after getting 113,088 votes after beating Wangui Purity who had 105,677 votes.

Stephen Sang has retained his seat as the Governor for Nandi County after garnering  237,045 votes .

Mwadime became the first candidate to win the gubernatorial race as an independent candidate in the coast region.

He garnered 49,901 votes to clinch the seat with Samboja of the ruling Jubilee Party coming second with 23,701 votes.

Kawira Mwangaza with an independent ticket  has won the seat. She has defeated the incumbent Kiraitu Murungi.

Andrew Mwadime on an independent candidate got 49,901 votes to clinch the seat with incumbent Granton  Samboja of the ruling Jubilee Party coming second with 23,701 votes.

Retired Major Dhadho Godhana of ODM has retained his seat by getting 26,982  votes while Dado of UDA got 26,633.

His competitors of Jubilee and former CS for Petroleum and Mining John Munyes (UDA) garnered 41,866 votes.

Second in the race was NDG’s Jack Ranguma who garnered 100,600 votes

Independent candidate Zedekiah Bundotich came in second with a vote count of 127,013.

Susan Kihika under the UDA Party  has been elected as Governor after winning with 440,707 , defeating incumbent Lee Kinyanjui 325,623

Hilary Barchok  has been re-elected as Governor  after winning  with 158,798 beating his main rival Isaac Rutto who garnered 137,323 votes

UDA's Mutahi Kahiga is the governor-elect after he garnered 213,373 votes.

Former Governor Benjamin Cheboi  won the election after garnering  137, 486 votes, followed by Eldama Ravine MP Moses Lessonet who contested as an Independent candidate and got 60, 879 votes

Wilber Ottichilo has retained his seat after garnering 76,041votes beating four other contestants.

Vying on the ODM  party ticket, he beat his closest challenger Moses Akaranga of Progressive Party of Kenya (PPK) who obtained 37,049, by a range of 38,992 votes.

He trounced his seven competitors including Ezekiel Machogu of UDA who finished second with 82,104 votes.

UDA's Cecily Mbarire was declared the governor-elect of Embu County after she garnered 108, 610 votes.

Fatuma Achani of UDA garnered 59,674 votes against his closest rival ODM's Hamadi Boga who got 53,972 votes.

Wiper's Julius Malombe has won the seat after he got 198,004 votes.

Ahmed Abdullahi Jiir ( former Governor) of ODM has won after  garnerning  35,533 votes, flooring all his competitors including the  incumbent governor Mohammed Abdi Muhamud  who only got 521 votes.

UDA candidate Kimani Wamatangi has clinched the seat with 348,371 votes.

Former Lamu governor Issa Abdallah Timamy of ANC has recaptured the seat after deafeating incumbent Fahim Yasin Twaha of the Jubilee Party in the 2022 polls.

Jama, an ODM candidate, garnered 69,342 votes while Korane who had earlier  conceded defeat even before the results were announced got  26,148 .

He polled 53,480 votes against his closest rival, former Industrialisation Cabinet Secretary Adan Mohamed who got 40,564 votes.

Lenku managed to get 117,600 votes against his closest competitor Katoo Ole Metito of the UDA party who garnered  111,725 votes.

Senator Mutula Kilonzo has emerged the winner in the Makueni Gubernatorial race after garnering 214,088 votes on a wiper ticket, trouncing his closest rival who ran as an independent Patrick Musimba who scored 63,252 votes.

Sakaja who was vying on a United Democratic Alliance (UDA) party ticket defeated his main rival Polycarp Igathe of the Jubilee party who got 573,518 votes.