Needy students rise above the odds to thrive in KCPE

• Despite the girl suffering from asthma, their house is bare floored and often collects dust.

• Earnest  Nyaguthii was the top scorer among the 13 pupils whose cases were approved. 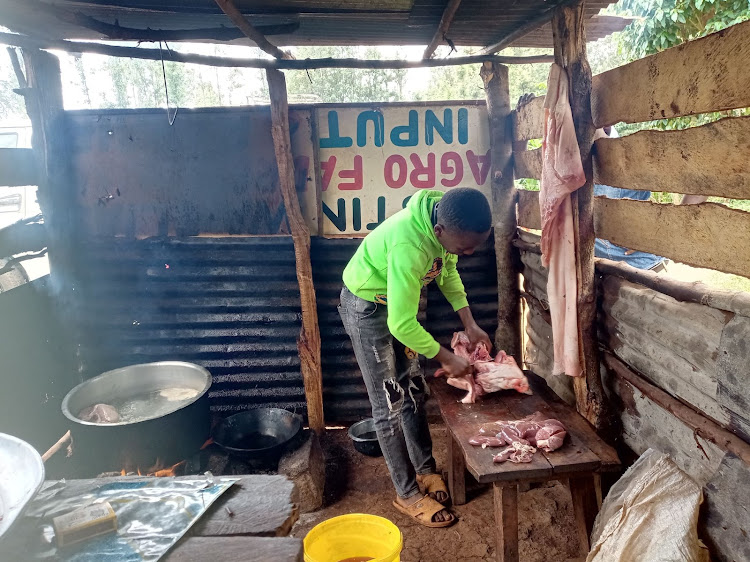 A pupil who sat for last year's KCPE helps in skinning a pig's head in his mother's pork local eatery in Kirinyaga Central
Image: WANGECHI WANGONDU

None of the team members know the home direction and as such, we sought to enquire from locals.

Luckily, one of the locals knows the family and where the boy was working at that moment. And as such, a message was sent to him, informing him that he had guests.

Njoki is one of the 13 pupils who had in the previous day arrived with his teacher before the ‘Wings to Fly’ selection committee team.

The boy came to make his case and convince the team why he should be among the scholarship recipients.

The programme, which is in its 13th year, was launched by the Equity Bank Foundation in partnership with other support groups.

It has seen more than 20,000 pupils who have attained more than 350 marks awarded scholarships for their secondary school education.

The 16-year-old shows up from his daily hustle looking ecstatic and ready to receive his guests.

He is wearing a white-grey striped pullover and brown trousers tucked into black gumboots.

Njoki tells the team he had been working as a tea picker at a farm in the neighbourhood. 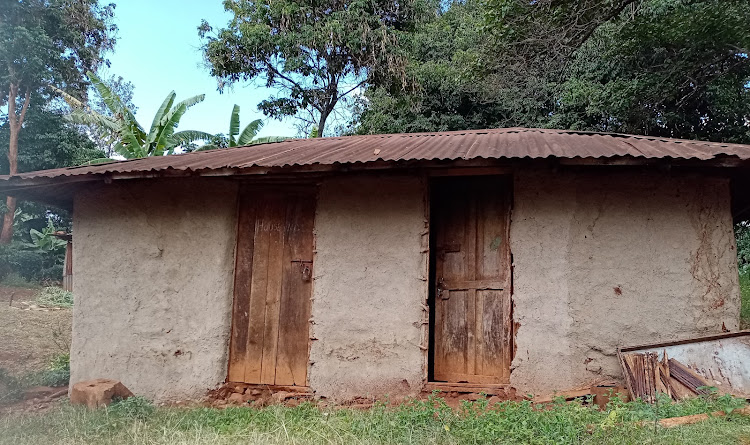 A mud house in which the family of one of the candidate's who excelled in last year's KCPE live.
Image: WANGECHI WANGONDU

He has been doing the job since he completed his KCPE exam at Gatwe Primary School in Kirinyaga Central.

The seemingly hopeful boy was position two in his school after attaining an impressive 366 out of the possible 500 marks.

He says his contribution in working on the tea farms helps a great deal to supplement the daily wages his mother earns from tea picking in yet another farm.

“Out of the money I make on a daily basis, I give my mother Sh100, which she adds to her daily income, thus enabling her to support my four younger sisters and I," Njoki says.

"On my part, I make sure I save Sh20 on a daily basis so that, should I go to high school, I will have a little amount to cater for my needs,” he says as he takes the team to his home.

The rustic wooden old structured house nests in almost half an acre piece of land which is secured with a lose live fence.

Njoki tells us that they pay Sh300 per month in rent for the two-roomed house.

Having undergone the cut after completing his primary school education, his mother is now forced to cough up an extra Sh300 to cater for the rent of her teen son's house, which is barely 50m from the main house.

A quiet atmosphere is what greets the team when the door to the house is opened.

Two old wooden beds rest on the edge of the dingy walls ,which exposes an abundance of crevices that help rays of light penetrate in the strikingly lonely house.

Overhead, one of the beds is an old sisal fibre rope tied from one end to the other with clothes propped on it.

Some other clothes are littered on a tattered old slim mattress laid on the bare ground beneath the bed structure.

The team is told that three of Muriuki's sisters share the mattress.

On the other bed, a six-month-old baby lies asleep on a slim mattress, which at least rests on a bed slat.

In no time, the baby lets out a whimper and quickly awakens upon hearing a disturbance in the room.

She is Muriuki’s youngest sister. Her mother is away, working in a neighbour’s tea farm.

Muriuki says the baby has barely fed since the mother left for work a few hours ago.

What calms her hunger pangs is some warm tea stored in a baby cup that rests in one of the house frames.

Besides the cup, other old knick-knacks and a light candle are placed on the wooden frame.

On the left hand side of the entrance, old utensils and a worn-out cooking jiko are clustered in a corner of the bare ground floor.

Old newspapers and campaign posters serve as temporary plasters on one side of the cooking section to at least secure the house some privacy.

Her mother Cecilia Njoki arrives as the team continues to conduct the assessment. 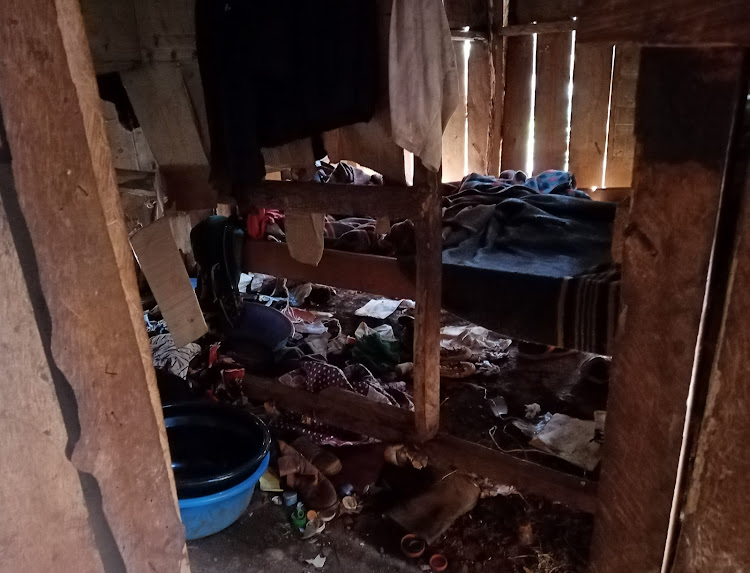 The deplorable condition of a house belonging to a needy family whose child sat for last year's KCPE exam.
Image: WANGECHI WANGONDU

She is a single parent with five children, Muriuki being her firstborn.

The hardworking mum says she can only afford to sustain her children one day at a time with their common delicacy being ugali, vegetables and black tea.

Moved by the sorry state of their living condition, some members are overwhelmed by emotions and burst into tears.

This prompts the team to voluntarily raise some money to buy the family some foodstuffs and personal items.

Despite the humble background and seemingly insurmountable challenges, Njoki is full of life and optimism.

The young man hopes to become a doctor some day in the future.

He is aware his family looks up to him to alleviate the abject poverty that has characterised a better part of his childhood.

He says he used to revise for his exams and tackle any other school homework in a neighbouring relative’s house, which luckily has electricity.

From there, the team makes its way to Mwangathia village in Ndia, where it meets Faustina Muriithi, 14.

She topped her class with 392 marks.

Despite having studied in a private school over the last two academic years, her parents did not chip in over lack of funds.

Her education was sponsored by the school’s proprietor.

A visit to her home confirms yet another emotional story of a humble background.

Faustina lives with her parent in a small, wooden three-roomed shack.

Despite the girl suffering from asthma, their house is bare-floored and often collects dusts, which scientifically has been proven as a cause of the disease.

Luckily, she has an inhaler, which she uses whenever she suffers an attack.

Her mother Evelyn Atieno says their casual jobs, which hardly come by, only enable them to live a hand-to-mouth life.

Faustina says she wants to change her status quo through education and subsequently assist her parents and the community when she grows up and becomes a lawyer.

Earnest Nyaguthii was the top scorer among the 13 pupils whose cases were approved by the select committee for home visits.

At the time of the visit, Maina and his aunt Jane Wanjiru are busy doing home chores.

The young lad is overwhelmed with joy, perhaps having sensed help is coming his way.

However, all has not been rosy for the 13-year-old.

Behind the jovial face is a young boy who has grown up experiencing frequent absenteeism of his blood parents.

His aunt narrates that she has single-handedly taken care of him since he was a baby.

They live in a mud house whose walls are smeared with cow dung for a fine finish.

She says the boy's mother, who is her blood sister, is away in Nakuru and does menial jobs for a living.

She says she hardly visits the boy or sends money, a situation that has forced her to take up the parental role, which has strained her.

Having attained two straight As and three A-minuses in the five subjects, Maina hopes to follow the same trajectory should his secondary school education dream be realised.

Upon completing his studies, he looks forward to flying aircrafts as a professional pilot.

The night of October 10, 2018, will remain vivid in the mind of Nicella Cheruiyot, who later in the afternoon was visited by the team.

The ordeal of losing her father through an attack and witnessing the deadly nightmare is a memory she is still coming to terms with.

The attack also saw her confined in a wheel chair and has now resorted to fully depending on her mother for personal and hygiene care.

Facial scars visible on her mother’s forehead are a constant reminder of how they survived the gory horror.

Despite a terrifying past, Cheruiyot did exemplarily well in her exam in which she attained 351 marks, thus securing the second position at Gaita Primary School in Kirinyaga.

Her mother Faith, who teaches in the same school, says it’s no mean feat taking care of her four children, among them Nicella, who require special care.

“Besides taking care of her physical hygiene, the girl requires continuous psycho-social support so she can fully accept herself and make peace with her past,” she said.

The shy, soft-spoken 15-year-old aspires to be a neurosurgeon.

Post a comment
WATCH: The latest videos from the Star
by WANGECHI WANG'ONDU
Big Read
26 January 2023 - 05:00
Read The E-Paper