Chaos at Bomas gate as Azimio leaders are locked out

"We are here, nobody is telling us why we cannot access tallying centre despite having the accreditation."

Tension is brewing at the national tallying centre, Bomas of Kenya's main entrance as several leaders get locked out of the venue. https://bit.ly/3c0AmtU 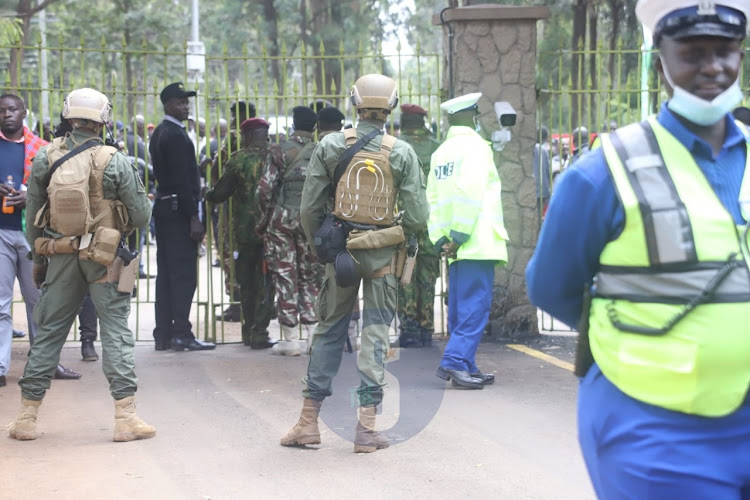 Security officers at the Bomas of Kenya main entrance after chaos erupted when some leaders were barred from Bomas of Kenya on August 14, 2022
Image: ANDREW KASUKU

Tension is brewing at the national tallying centre, Bomas of Kenya's main entrance as several leaders get locked out of the venue.

The leaders who came with a group of supporters were momentarily barred from accessing the venue, causing the supporters to protest the move.

"How do you explain me being locked out of Bomas as the chair of the Azimio presidential campaign and as an accredited agent? Chebukati must come clean to Kenyans," he said.

Normally when you are accredited, you are allowed to get to Bomas.

"We are explaining to the officers that what happens to Kenyans is on their hands," he said.

Speaking to the Star on phone, Sifuna said they were blocked from accessing the tallying centre by police officers manning the main entrance of the facility.

"We are here, nobody is telling us why we cannot access the tallying centre despite having the accreditation," Sifuna said on phone.

A contingent of security teams, including riot police, GSU officers and special teams are at the gate to calm the situation.

They were later allowed access but blocked from accessing the auditorium where verification is ongoing.

They are currently at the VIP lounge

On Saturday, commissioner Abdi Guliye ordered non-essential people out of the main auditorium where tallying was ongoing, saying only accredited party agents, media, observers and IEBC staff would be allowed at the premises going forward.

It comes amid rising tension at the auditorium over allegations of vote rigging.

List of people allowed at Bomas of Kenya in new changes

Additional security officers have been deployed at the centre.
News
1 month ago

Chaos at Bomas over suspicious laptop

The device has since been confiscated by the police.
News
1 month ago

IEBC issues new list of people allowed in Bomas, locks out others